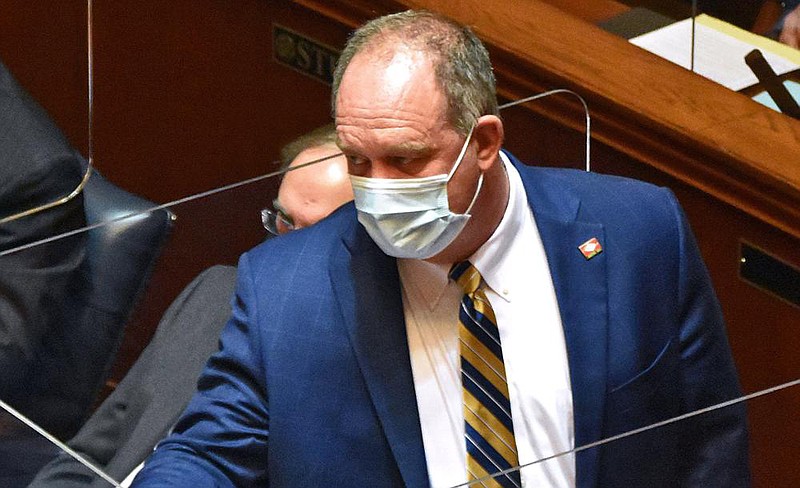 Legislative leaders on Thursday revived stalled efforts to pass tougher penalties for targeted attacks on certain groups of people, though both of the bill's sponsors as well as anti-discrimination advocates were quick to distance the proposal from a long-sought hate-crimes bill.

"I'd just characterize it as a class-protection bill," said Senate President Pro Tempore Jimmy Hickey, R-Texarkana, shortly after he and other lawmakers filed Senate Bill 622 on Thursday.

The legislation differs from previously proposed hate-crimes bills in that it does not list specific protected classes -- such as race, sex, gender identity and sexual orientation -- but rather broad sets of characteristics that could define a protected group.

Under the bill, prosecutors could seek longer prison terms for certain violent crimes where victims are targeted based on their inclusion in an identifiable group that shares "mental, physical, biological, cultural, political, or religious beliefs or characteristics."

Hickey, who sponsored the bill along with House Speaker Matthew Shepherd, R-El Dorado, and the chairmen of the House and Senate judiciary committees, said the bill was written to include groups protected under similar proposals.

Gov. Asa Hutchinson, a Republican and proponent of hate-crimes legislation, was quick to announce support for SB622 Thursday, along with an endorsement from the Arkansas State Chamber of Commerce and major businesses such as Tyson Foods.

Other advocates, however, said the bill was not a serious effort at combating hate crimes.

In a statement denouncing the bill as a "sham," the Anti-Defamation League said Thursday that it would not consider Arkansas to have a true hate-crimes law if SB622 is enacted. The Human Rights Campaign and the Urban League of Arkansas also released statements opposing the bill.

"The legislation filed today is in no way a hate crime bill and it is nothing more than an insult to vulnerable communities targeted by hate," said the Anti-Defamation League statement. "The juxtaposition of this bill, which fails to enumerate protected categories or even use the term 'hate crime,' with the enactment of legislation that specifically discriminates against LGBTQ+ people is a giant leap backwards for civil rights in Arkansas."

"I'm not going to support something to check a box that cannot actually name the groups that need to be protected," McCullough said. "It's almost, by protecting everybody you're protecting nobody."

For years, efforts to pass hate crimes legislation in Arkansas have run into stiff opposition from conservative lawmakers who objected to the inclusion of LGBT people as protected classes under the proposed bills. Federal law passed in 2009 allows for the prosecution of hate crimes based on the victim's sexuality or gender identity.

Hutchinson first began calling for adoption of an Arkansas hate crimes law in 2019 and made such an effort one of his priorities for this year's legislative session.

The governor's nephew, Sen. Jim Hendren of Sulphur Springs, filed a bill early in the session creating sentence enhancements for hate crimes against members of a dozen protected classes, including race, sex, gender identity, sexual orientation and religion. That bill failed to gain any traction. Hendren left the Republican Party in February to become an independent.

In a statement Thursday, Hutchinson thanked Hickey and Shepherd for reviving interest in the issue during the last month of the session.

"I am very appreciative of the work of key legislative leaders in crafting a new bill that makes it clear that Arkansas will increase the prison time for anyone targeting another for a violent crime because of their race or other characteristic," the governor said. "While this is not the bill that I had envisioned at the beginning of the session, it is a significant step forward in giving assurance that we are a state that values the diversity of our country."

Speaking to reporters on Thursday, Shepherd defended the bill from criticism over its broadly written language. He said the language ensured the bill would cover more protected groups, not fewer.

"At the end of the day, if this passes, every class or group will be protected in the state of Arkansas," Shepherd said. "That is much broader and much more substantive than many of these so-called hate-crimes bills across the country."

In addition to using different language than other hate-crimes bills, SB622 would create sentence enhancements based on parole eligibility instead of tacking on additional years to an offender's sentence. Under the bill, someone convicted of a targeted attack would be required to serve 80% of his sentence before becoming eligible for parole.

The bill would apply only to certain violent felonies, such as murder, arson, battery and assault.

After reviewing SB622 Thursday, Hendren said he was "glad to see movement" on the issue, but declined to say he would support the bill until meeting with groups affected by hate crimes.

"There is a lot of space between their bill and the bipartisan bill that [Rep. Fred Love, D-Little Rock] and I filed," Hendren said in a text. "I am not concerned about who sponsors the bill but that we pass a bill that is clear, that it will provide real protections to those who have been victimized by hate crimes."

Both Shepherd and Hickey said they had not counted votes within their respective chambers to gauge support for the measure as of Thursday.

The Family Council, a faith-based advocacy group that has been influential in opposing past hate-crimes legislation, was reviewing the measure and had yet to reach a position, according to its president, Jerry Cox.

Shepherd said he had conversations with a number of lawmakers while drafting the bill, and reached out to members of both parties.

Members such as Love and McCullough, who have pushed for hate-crimes legislation in the past, said they were not involved in drafting the bill.

While saying he expected some opposition to SB622 from both conservatives and liberals, Shepherd said Thursday that he believed that the bill offered an opportunity at "consensus" after nearly 20 years of failed attempts to pass a hate-crimes law.

"I think the feeling was that this issue is probably not going to go away," Shepherd said.