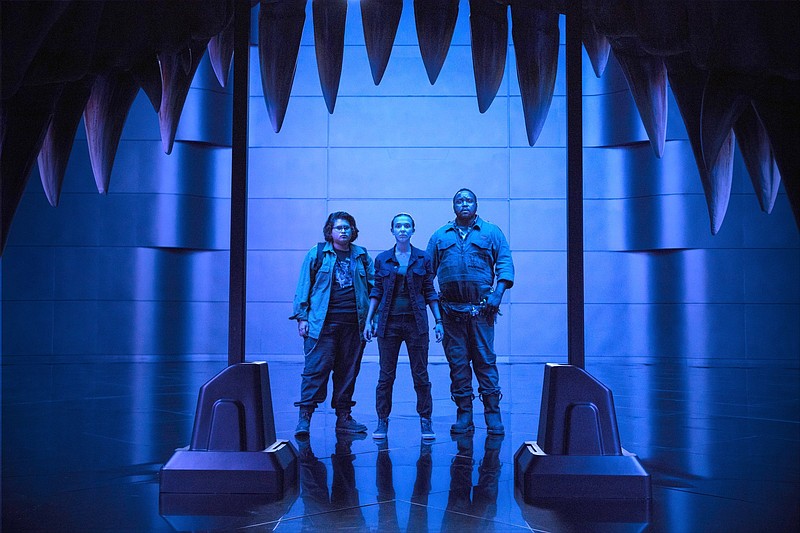 I really struggled when I initially sat down to write about this massive-size-monster movie. At first, I blamed myself, assumed I was somehow not in the proper frame of mind to respond to the ongoing blood-feud between an enormous, enraged primate and an equally large radioactive reptile. But as time progressed, and my paragraphs remained unwritten, I began to place more of the blame on the film itself, which is made with so little care, or wit, or even the semblance of a coherent story, it defies one's ability to process it. Or rather, it was made with such little regard for any audience member beyond the most fervent "Titan" fanperson, it's actually irritating to give it this much thought and effort. The film's producers don't care, it would seem, so why should anyone else?

Yes, it's a film about a pair of such titans waging unholy war on each other, mostly due to an ancient rivalry -- Adam Wingard's film takes a heady pause to show us ancient depictions from Mesopotamia (or wherever) of the monsters doing battle against each other, eons ago, to emphasize the timeless nature of their tiff -- for the right to earn the title of 'Apex Predator.' (This despite the fact that 2019's "Godzilla: King of the Monsters" would seem to have already settled this dispute conclusively).

As you might expect, the movie is as dumb as an undercooked baked potato: a string of laborious CGI clashes held together with the spindliest of plot filaments. Chances are, if you're planning to see it, you aren't expecting something out of le Carré, but even with a sufficiently lowered narrative standard, you have to withstand so many lazy plot idiocies -- Dr. Ilene Andrews (Rebecca Hall), the protective, so-called"Kong whisperer" scientist somehow allowing her giant ape ward to be dangerously transported thousands of nautical miles to the Arctic via a huge barge on what is, essentially, a momentary whim -- and so much withering dialogue ("There can't be two alpha titans!") just to get to the big monster brawls that play more or less exactly like WrestleMania events; you'll still be left wanting.

The curious thing is the "screenplay" was written by Max Borenstein and Eric Pearson, the latter of whom penned the infinitely more amusing "Thor: Ragnorok," and the forthcoming "Black Widow," which at least strongly suggests the foul odor of Massive Studio Interference wafting off this garbage scow. (At least we are optimistic "Widow" fans must hope so.)

As the film begins, Kong is safely ensconced inside a man-made bubble on Skull Island, ostensibly to keep him safe from the continued violent entreaties of Godzilla, who patrols the waters with manic zeal (remember, "There can't be two alpha titans!"). When the giant lizard suddenly rises up out of the depths to eviscerate the coastal Florida lab campus of Apex Cybernetics -- a multi-billion dollar corporation owned by uber-capitalist Walter Simmons (Demián Bichir) -- even Godzilla's staunchest defenders have to assume he's somehow turned on humanity and must be stopped.

That is, nearly all of his defenders: Among those who still see the radioactive lizard as a benefactor are Madison Russell (Millie Bobby Brown) -- the daughter of Dr. Mark Russell (Kyle Chandler), a heavy-hitter with the U.S. government -- her high school best friend Josh (Julian Dennison), and conspiracy theorist Bernie Hayes (Brian Tyree Henry), who runs the "Titan Truth Podcast."

Suspecting Godzilla somehow knew Apex was up to no good, the trio manage to get access to the wreckage of the former lab -- evading heavily armed, high-tech security details just comes naturally to them -- and end up in a transport pod that shoots them from Florida to Hong Kong via an under-ocean transport tube (much of the film's tech seems inspired from Google search results of Elon Musk). There, they find the capitalist swine Simmons has been busy creating the fearsome MechaGodzilla -- a giant scaled robot, nonsensically built in the exact form of the King of the Monsters himself (for one thing, Simmons needn't have had to waste the materials needed to re-create a robotic version of Godzilla's prodigious, child-bearing hips, but I digress).

Meanwhile, Kong, now safely transported to the Arctic, leads a crew of scientists, including his pal Dr. Andrews, her old colleague, Professor Lind (Alexander Skarsgård), and, naturally, Jia (Kaylee Hottle), a young deaf girl whom Kong communicates with via sign language (you can practically hear Koko rolling her eyes). This crew heads down yet another transport tube all the way into Hollow Earth, a fantasia-like world that looks almost exactly like Skull Island but with a mirror image of itself hanging above and, without explanation, a sun on the horizon line. A sun. In the core of the Earth. Seemingly unperturbed by such atmospheric anomalies, Kong eventually leads them into a giant chamber where he -- sigh -- picks up a huge, ornate battleaxe, and takes a weary seat on ... the Throne of the Apes!

You know what? That's just about enough of this narrative. Suffice it to say, Kong and Godzilla duke it out again with one champion emerging while still allowing the other to live, which, in turn, leads to them teaming up against the crazed robot MechaGodzilla (oh, did I neglect to mention Mecha blew his circuits and was now somehow sentient? My bad), who runs into beleaguered Hong Kong, where the other two have just finished their contretemps, looking for titan trouble and finding it easily.

Outside of the two giant, combating protagonists, nobody comes away from this film with much self-respect, least of whom the actors, who mostly acquit themselves as if their limos are idling outside the set, waiting to take them to the airport before the lines at the gate get too heavy. It's not so much a problem for the young-uns, but a much worse look for Hall and Skarsgård, whose celebrated thespian lineages would suggest something of a higher calling.

The truth is, there isn't terribly much more of interest to discuss here, nor anything particularly novel: A big studio made yet another brain-dead, CGI-laden tentpole, existing solely to perpetuate the further adventures of its universe's inhabitants, such that their blockbuster series can continue, ad infinitum, until the properties have been bled completely dry and no more sauce can be scraped out of the jar.

There are some name actors at work here, blatantly slumming for significant paydays and little else. In subsequent films, of which we can be assured there shall be an abundance, some of these actors will continue to play these parchment-thin roles and have to say things like "Kong bows to no one!" with a suitably straight face, while others will move on to work on (hopefully) more worthy projects and be seamlessly replaced with other name actors looking for similarly robust paychecks. The other monster Titans will continue to rise up and threaten the Earth and be thrashed down by Godzilla or Kong or the both of them. Maybe Godzilla will retire and move to a condo in Florida and Kong will start signing things to Jia like "Fighting isn't the answer. I have become a Buddhist," but more than likely, not. Whatever else happens, these films will continue to pour out and make their money, then recede and become completely forgotten in the process.

All of this is how it was before, of course, but after what we've all been through the past year -- all the suffering and anxiety and loss, all the loneliness and isolation, and emotional turmoil -- I can't help but feel as if we all deserved better than an immediate return to this sort of contemptuous schlock. If this is the best the studios can throw our way, it feels like a tremendous waste. Film has always reflected our time, but at its best it has also inspired us, brought us joy and comfort, and protected us from the pressures and horrors of the outside world. The usual, cynical cash grabs, like this junk, shouldn't be our sole cinematic reward for surviving 2020.