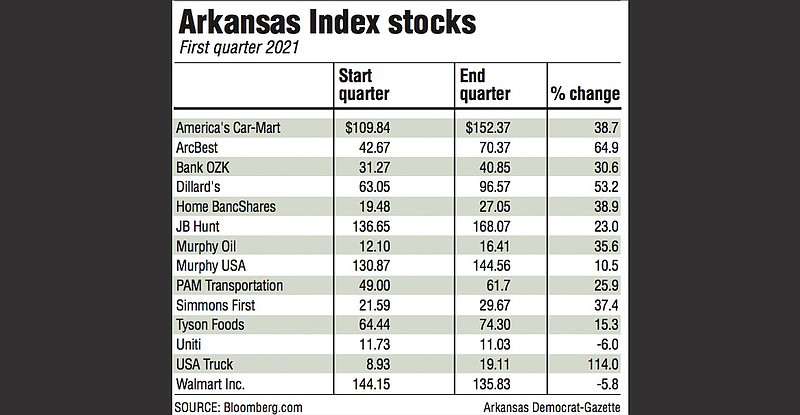 The Arkansas Index -- a grouping of the 14 largest publicly traded companies in the state -- posted nearly a 24% gain for the first quarter of 2021, hitting the 600-point mark for the first time just a few days ago.

Individually, shares of 12 of the 14 Arkansas companies posted gains for the quarter.

The Arkansas Index outperformed the Dow Jones Industrial Average, S&P 500 and the Nasdaq for the quarter. Only shares of Uniti Group and Walmart posted losses, at about 6% each.

"Arkansas stocks, on the whole, did extremely well in the first quarter," said Chris Harkins, managing director at Raymond James & Associates in Little Rock. "A large part of that has to do with the fact that, as the economy recovers, Arkansas has quite a few companies that are economically sensitive. Investors felt it was time to move back into these stock sectors, specifically transportation and financial stocks."

The state's trucking sector did especially well for the quarter.

Shares of USA Truck opened the year at $8.93 and closed the quarter at $19.11, up 114%. Percentage-wise, that was the biggest jump in the Arkansas Index's first quarter. An investment of $1,000 in the Van Buren company at the start of the quarter was valued $2,140 at quarter's end.

Shares of ArcBest Corp., the trucking and logistics company in Fort Smith, closed out the quarter at $70.37 after opening for the year at $42.67. Shares of J.B. Hunt Transport Co. rose 23% for the three-month period.

"Arkansas-based financial stocks have rallied more than 30% in the first three months of this year," Harkins said. "Again, in large part, this is due to investors' confidence that the economy will reopen and that interest rates, as they move higher, benefit financial stocks."

Dillard's shares rose 53% for the quarter, with the retailer at one point receiving attention from some analysts who noted a sharp rise in prices as the GameStop small-stock phenomenon played out in late January and early February. Dillard's shares opened the quarter at $63.05 and closed it at $96.57.

America's Car-Mart posted gains of more than 38% for the first quarter.

"These two stocks are another example of investors' confidence that, as consumer spending compounds with stimulus money, these neglected sectors will be major recipients of this recovery," Harkins said.

The energy sector of the S&P 500 posted nearly a 30% gain for the quarter, and shares of Murphy Oil Corp. reflected those gains.

Founded in El Dorado but now based in Houston, Texas, Murphy Oil saw its stock rise from $12.10 to $16.41 during the three months, or better than 35%. Shares had fallen to $4.50 about a year ago, at the onset of the coronavirus pandemic and resulting collapse in the demand for gasoline.