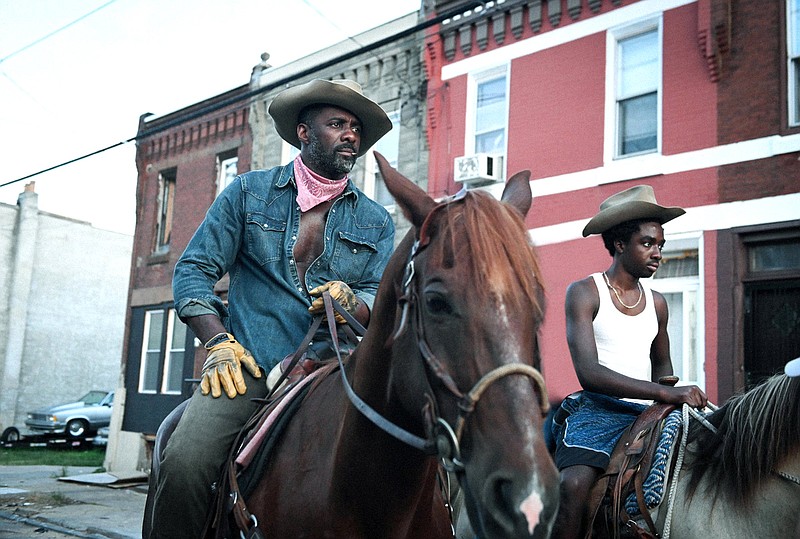 Harp (Idris Elba) tries to connect with his estranged 15-year-old son Cole (Caleb McLaughlin) in “Concrete Cowboy,” a fictional story set around the real subculture surrounding Philadelphia’s Fletcher Street Stables, one of the oldest and last-remaining of the city’s inner-city stables.

If a friend called me up and asked, "Hey, do you want to watch a Western with Idris Elba?" I would respond in the negative. I'm not interested in seeing "The Dark Tower." Fortunately, the new Western released on Netflix today isn't poorly-adapted Stephen King material.

"Concrete Cowboy" is a story filled with atypical cowboys. For starters, it's not set in the American West. (That's OK. Neither were "Quigley Down Under" or "Justified," and they're still amazing Westerns.)

Next, the story focuses on urban cowboys in modern Philadelphia, and it's based somewhat on actual folks who own and ride horses in the City of Brotherly Love. I'm talking about real Black urban cowboys who a lot of people don't even know exist. Hopefully this movie fixes that.

"Concrete Cowboy" follows a teenager named Cole (Caleb McLaughlin) who gets into fights at school and is about to be expelled. Fed up, his mother drives him from Detroit to Philadelphia to live with his father for the summer. His father is an urban cowboy named Harp (Elba) who literally keeps a horse in his living room.

Throughout the film there's a choice between two paths for Cole: ride with his friend Smush (Jharrel Jerome) in a world of drug deals or ride with his father and learn to be a cowboy, getting his inner demons under control.

There's not a bad performance within 50 miles of this movie. McLaughlin plays a truly troubled and desperate teen. He's not the plucky kid from "Stranger Things" who plays Dungeons and Dragons with his nerdy friends anymore. In a way, his role is more grounded, his challenges more personal than inter-dimensional aliens.

Elba does a fantastic job playing a stern father who doesn't know whether to give his kid a hug or a kick in the butt. He'll do both in "Concrete Cowboy," and the film is better for it.

At the center of this movie is an urban stable, doing its best to hold out against neighborhoods that are gentrifying and city officials who are wanting to clear the place out.

But there's a beautiful sense of community among the cowboys who see each other as family and stand steadfast. My favorite character was Nessie, played by Lorraine Toussaint. She's this perfect blend of cowgirl and a sort of mother among the group who is filled with as much tough love and dedication to her community as Harp is.

At one point in the movie, while Cole is still trying to figure out if he wants to be on the street or stay with his father and obey the rules, he turns to her for help. Nessie informs Cole she's got rules too. And when he accuses the cowboys of only caring about themselves, she remarks that she's on her knees every morning at 4 a.m. praying for every boy in the neighborhood.

At night, the cowboys sit around a fire drinking and smoking under the stars. They'll sing, they'll tell stories, and they'll poke fun at one another. And if that sounds a little corny, let me assure you, this film hits its audience with reality. Every single detail, from the neighborhoods these cowboys live in to the choices Cole has to make, seem grounded in realism.

When Cole says, "There's a horse in your house," it doesn't feel silly, because the house is a mess. Harp doesn't exactly keep a tidy home for his son. But he cares about the horse on the first floor (for reasons you'll learn as the film progresses).

Almost everything in "Concrete Cowboy" feels earned. The film trots along at a slow pace, taking time to show Cole just how deep the hole he can fall into really is and how hard he has to work to climb out of it.

Eventually, Cole comes to love this (stop me if you've heard it before) wild horse that can't be tamed by anyone else. The horse's name is Boo, and it offers parallels for Cole's journey about needing to get one's life under control.

As one cowgirl remarks while Cole is cleaning out the stable, "Horses ain't the only thing that need breaking around here."

The film does a great job at building up Cole's development into a growing boy who learns about the consequences of being in the drug trade. And because McLaughlin and Elba are such great actors, when some rather big consequences arrive during the film's climax, they hit hard.

As I watched Harp clean the blood off of his son and hold him while he cried, all I could think was, "Damn." The father and son have good chemistry, even if it takes a little while to show up. There's a scene from the film's trailer that seems to serve as an homage to perhaps the most famous moment from "The Fresh Prince of Bel-Air" when Will Smith cries and asks his uncle why his father doesn't want him.

In "Concrete Cowboy," Cole finally addresses the hole in his heart left by a seemingly-absentee father by asking Harp, "Why do you hate me?"

The cinematography complements the story beautifully. There're a few great POV shots, my favorite being while Cole is shoveling horse manure. In another scene, a cowgirl named Esha (Ivannah-Mercedes) is teaching Cole how to stand on his horse at dusk. A low camera reveals their horseback silhouettes against approaching evening skies filled with reds and purples. Beautiful. Minka Farthing-Kohl did a hell of a job on the cinematography.

The main flaw for "Concrete Cowboy" comes in its runtime. I think the movie runs a little long at just shy of two hours. The story would have benefited more if it'd had around 20 minutes shaved off.

There's a romantic subplot with a cowgirl Cole has a crush on that's unnecessary. I also grew tired of repeated transition shots of chickens wandering around the neighborhood. And the finale leaves the fate of the horses vaguely unresolved.

These are small complaints in an otherwise solid film, and they're easily overshadowed by such fantastic performances from Elba and McLaughlin. The scene where Harp reveals where Cole got his name from? Potent. And the movie is filled with strong moments just like it.

Timeless themes and powerhouse performances fuel "Concrete Cowboy" to be the dramatic contemporary Western that it is.