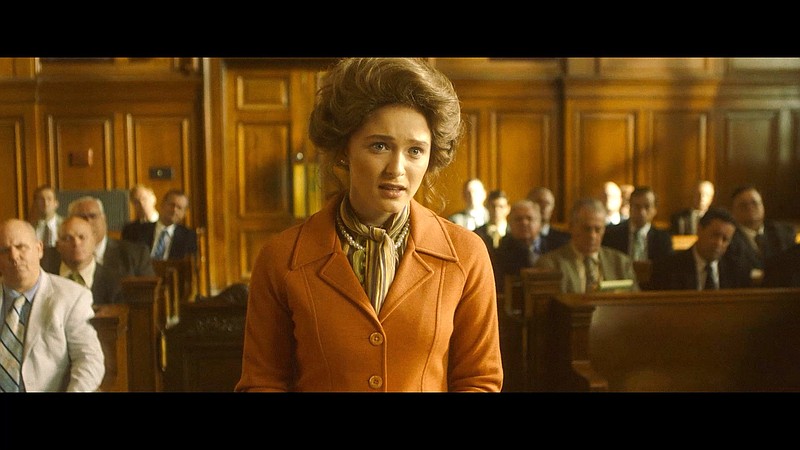 Sarah Weddington (Greer Grammer) was likely the youngest person ever to win a case before the U.S. Supreme Court when she argued on behalf of a “Jane Roe” in the famous case revisited in Nick Loeb’s “Roe v. Wade.”

Decades after the Supreme Court's verdict on Roe vs. Wade, the decision on abortions still divides Americans, so it's reasonable to expect a movie on the subject to be incendiary.

Nick Loeb and Cathy Allyn's "Roe v. Wade" may be a passion project for the fledgling writer-directors, but their movie oscillates between tedium and unintentional hilarity.

Loeb and Allyn's stagecraft is flat and clumsy. Characters in "Roe v. Wade" don't converse; they recite platitudes from noted thinkers. When a pro-life priest begs Dr. Mildred Jefferson (Stacey Dash) to join his cause, he bellows, "First they came after the Jews..." as if viewers had never heard Lutheran pastor Martin Niemöller's poem before.

Oliver Wendell Holmes and Benjamin Franklin get similar treatment. It's almost as if Loeb and Allyn gave up on trying to write banter that sounds as if it emerged from human lips. It's almost as if they simply cut and pasted sections from Bartlett's Familiar Quotations as some sort of postmodern experiment.

Hey, it's not plagiarism if you cite the source, and it sounds better than what the directors actually wrote.

When Dr. Bernard Nathanson (Loeb) finally confesses to a Washington Post reporter that his whole career as an abortion practitioner was a series of murders, the skeptical journalist replies, "First you said all you see is bloody meat. Now, you say it's a person?"

Nathanson's story could have made a fascinating tale in better hands. He was a passionate activist for the pro-choice cause, but in the 1980s, he produced and narrated the pro-life documentary "Silent Scream." A thoughtful and honest recounting of his life certainly has inherent drama.

Loeb and Allyn can't seem to find it. Nathanson's change of heart comes late in the movie, and his arc is so rushed it gives a viewer whiplash.

Loeb's flat performance certainly doesn't help. I suppose he cast himself because he was, oh, around, but watching him yelling at God or gleefully fooling the public into accepting abortion as a right looks just the same in this film.

Adding a long voiceover only makes the film seem even more inert. Loeb and Allyn have apparently seen "Goodfellas," but they have trouble depicting Nathanson's torment or glee or any other convincing emotion. With the earlier movie, Martin Scorsese captured the allure and the craven nature of life in the Mob. Nathanson's transformation simply doesn't happen here.

Loeb has attracted several familiar faces, but his writing and direction do them no favors. Joey Lawrence can't start a sentence without hitting a legal quotation, and Jon Voight does little more than give a concerned gaze as Chief Justice Warren Burger. Pundits like My Pillow founder Mike Lindell get a chance to prove that they aren't natural thespians, and many of the old pros recite their lines as if they are reading a 1040 form aloud.

If the events on screen lack a certain sense of emotional weight, Loeb and Allyn flood the soundtrack with moody music. (In the screener I viewed, the score was credited to "TBD.") The film also gives the impression that Loeb's Nathanson would like to have you believe that he and flack Larry Lader (Jamie Kennedy) invented the idea of aborting pregnancies and that everyone else who had a say in how the verdict turned out was a victim of their manipulation. Loeb's voiceover drowns out conversations that Nathanson could never have heard firsthand.

Normally a leap of logic of that sort would be easy to ignore, but "Roe v. Wade" moves at the pace of an arthritic snail.

A few years ago, I covered "Gosnell: The Trial of America's Biggest Serial Killer" about abortion doctor Kermit Gosnell, whose procedures sent patients to the emergency room and to the morgue. At least that movie had a detective film structure that gave it a little momentum. The documentary "AKA Jane Roe" is also more interesting because Norma McCorvey (Jane Roe) spoke out both for and against abortions throughout her life.

You can tell "Roe v. Wade" has been sitting on the shelf for a few years because it doesn't include her final statements admitting that she had taken up the pro-life cause for cash. People on both sides of the argument admit in the film they used her for their own agendas and that she was an awkward poster child for both arguments.

Rating: PG-13, for mature thematic content and some bloody/disturbing images

Available for rent or purchase on most major streaming platforms