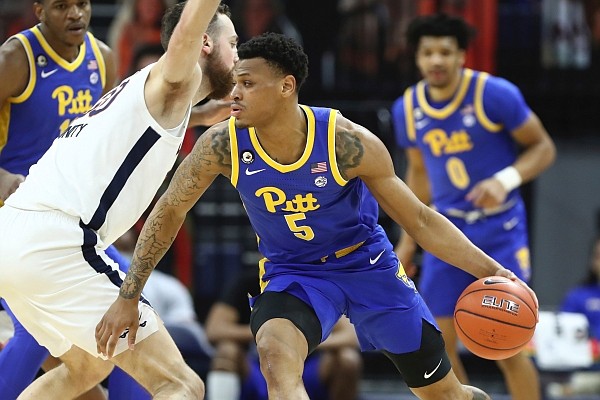 FAYETTEVILLE -- While University of Arkansas Coach Eric Musselman led the Razorbacks to their first NCAA Tournament Elite Eight appearance since 1995, he also was recruiting.

That was evident on Thursday when Au'Diese Toney -- a 6-6 forward from Pittsburgh -- announced his signing with Arkansas as a graduate transfer.

Toney, who will be a senior next season, averaged 14.4 points, 5.9 rebounds and 2.3 assists in 16 games for the Panthers this season before deciding to enter the transfer portal.

"We've been recruiting him throughout the entire NCAA Tournament run," Musselman said. "It's been great to get to know he and his mom and dad. I'm really, really excited.

[Video not showing up above? Click here to watch » https://www.youtube.com/watch?v=rC7SveO151Y]

"We needed a versatile guy, and he's going to be able to provide us so much, because he can basically play any position on the floor."

"He can do a lot of things," Musselman said. "When we've talked about Diese it's been his ability to make a three. Ability to beat people off the bounce. Ability to isolate.

"A great transition player. A proven player in a Power 5 conference."

Moses Moody, a 6-6 guard who averaged 16.8 points as a freshman to lead Arkansas in scoring, is projected as an NBA Draft first-round pick by numerous websites, but he has not announced his plans.

"I have not talked with Moses or his father," Musselman said. "I'm sure we'll sit down at the right time.

"Whatever Moses and his family feel is in their best interest, I'm 1,000% in support. Our whole coaching staff is. He had an incredible year. Awesome young man to coach."

Smith and Tate were both starters, while Jackson played primarily off the bench.

"Having coached at the G League level and NBA level and the European level, at some point you're going to start at a certain spot, then your career is going to grow," Musselman said. "I think all those guys, it's time for them to go pursue their dreams of playing professional basketball.

"We'd love to have them all back selfishly. But look, if you're at a European level, play there. It usually takes you two to three years to go from, let's say, second division in the country to top division. There's a time process that a player has to kind of grow his game again.

"It's the same thing if a player starts off in the G League, then works his way up. Why not start that process now? That, to me, is what's fair for our three seniors."

"Desi had two great years while we've been here, and obviously with Coach [Mike] Anderson," Musselman said. "We wish him nothing but the best. Big part of our culture and helped build it, and had a lot of different roles for us."

"For sure," Davis said when asked if he believes Arkansas will have the team next season to make another deep run in the NCAA Tournament. "I'm going to try my hardest to put my team and myself and the rest of the community in the best position possible."

"I think the message and motivation for this team now is doing better than what we did this year," Williams said. "We don't want to be walking off the court while [the opposing team] is over there celebrating with their [Final Four] hats on and running and jumping around.

"That was a bad feeling and I'm pretty sure all of us can say that we don't want to have that feeling again and we want to get back to where we were and do better than what we did."

The 7-3 Vanover made 27 starts and averaged 6.3 points, 4.5 rebounds and 1.8 blocked shots, but didn't play in the last three NCAA Tournament games.

Musselman said Vanover needs to continue to add weight and strength, develop his inside game to go along with his perimeter shooting and draw more fouls.

"Just with his size and his touch, scoring around the rim is important for his development personally and also for the team," Musselman said.

Freshman guard Khalen "KK" Robinson played in the first 11 games before undergoing season-ending foot surgery. Robinson has been wearing a protective boot, but Musselman said he got to take it off on Wednesday.

"He's going to wear it half a day and go half a day without it," Musselman said. "We're not going to rush him back. We want a slow, methodical rehab to get him back 100%."

Kamani Johnson, a 6-7 forward, redshirted after transferring from the University of Arkansas at Little Rock, where last season he averaged 11.0 points, 6.7 rebounds and 2.2 assists. He hit 144 of 198 free throws.

"At times this year, I was like, 'Yo, back off,' because he's physical and I didn't want anybody to get hurt," Musselman said of how Johnson practices. "When he goes to the rim, he's a physical dude who seeks contact.

"We want to continue to work on his perimeter shooting, but he's going to be a tenacious rebounder and a guy that really, really puts a ton of pressure on the rim."

Junior forward Ethan Henderson played in 18 games off the bench this season. Forward Abaymi Iyiola, who redshirted last season as a transfer, played in just one game after tearing an anterior cruciate ligament last summer.

If Moody isn't back, Arkansas will have two scholarships available for next season's team. That's assuming no other players decide to transfer.

"Regarding the portal, I mean, I'm not sure in any sport if anybody knows what is going to happen from day to day," Musselman said. "All you need to do is look at what has gone on in our own conference and look across the board in college basketball.

"I think it's just kind of the nature of where college hoops is right now."

A look at who is leaving among Arkansas’ scholarship players, who might be leaving, who is expected to return and who is coming in:

NOTE If Moody leaves for the NBA and no other Razorback transfers, the Arkansas roster will have room for two more scholarship players.