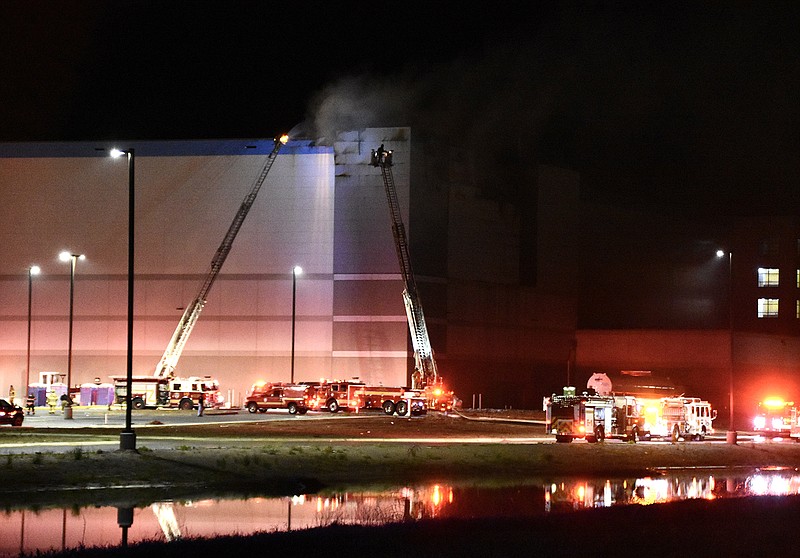 Little Rock firefighters work to extinguish a fire Friday night at the Amazon fulfillment center that is under construction on Zeuber Road at the Little Rock Port. More photos at arkansasonline.com/43amazonfire/. (Arkansas Democrat-Gazette/Staci Vandagriff)

A fire on Friday damaged the roof of an Amazon.com fulfillment center that is under construction at the Port of Little Rock.

No one was injured, officials said.

The cause is under investigation, but authorities said the fire was contained to the roof and that insulation appeared to catch fire.

The global technology and online retail giant is building a fulfillment center on an 80-acre site on Zeuber Road within the port.

[Video not showing up above? Click here to watch » https://www.youtube.com/watch?v=Fc5AmHwtDRg]

The facility is expected to employ about 1,000 people and deploy the latest advancements in robotic equipment to help put together shipments, officials have said. Based on new construction costs of at least $75 per square foot, the project is worth about $255 million.

Firefighters received the call about 6:24 p.m. and responded to 6911 Zeuber Road where they found the northeast corner of the building on fire, according to Pulaski County sheriff's office spokeswoman Kristin Knox.

Construction workers inside the building were able to get out safely, according to Knox.

"From what we know from the Amazon representatives, the fire started at shift change," Knox said.

Because it was contained to the roof, the fire was not as severe as it could have been had another part of the building caught fire, Coffman said.

Little Rock Mayor Frank Scott Jr. announced the fulfillment center almost a year ago. The building was expected to open by the fourth quarter of this year. But Bryan Day, the Little Rock Port's executive director, has said in recent weeks that it could open as soon as this summer.

Amazon had said the five-story building totals 826,000 square feet. A review of the plans by the Arkansas Democrat-Gazette last summer showed it totals 3.4 million square feet.

According to a safety diagram included in the plans for the Amazon site, the first level has enough room for 2,267 occupants. There are 32 exits on the first level.

The first level has at least three break rooms; an area for lockers; a recruiting open area; a first-day training classroom; a career choice classroom; and other offices.

Like the other levels, most of the space is open for processing, packaging and delivering orders.

Each of the other four levels takes up 649,469 square feet, enough room for 1,299 occupants each, according to the plans. Each of those levels has 12 exits.

The project is one of at least four Amazon facilities that are planned or already have opened in Central Arkansas. They include smaller distribution facilities in southwest Little Rock and Maumelle as well as a second fulfillment center under construction in the Galloway area of North Little Rock. It is expected to handle large, bulky items.