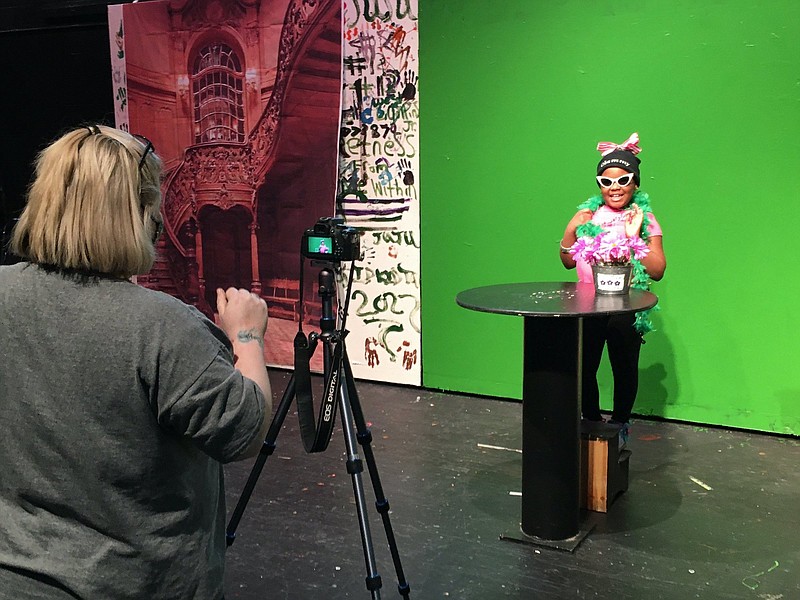 Cali Reed performs the role of Glammy during the filming of “Mirror, Mirror on The Wall — A Virtual Fractured Fairy Tale.” The production is edited by ASC Theater education coordinator Lindsey Collins (left). (Special to The Commercial)

It's a subtle reflection of many Americans' lives during the covid-19 pandemic: broken or delayed dreams, isolation but of enduring, unshakable hope.

"Mirror, Mirror on The Wall -- A Virtual Fractured Fairy Tale" is the Arts & Science Center of Southeast Arkansas' first show of its 2021 season.

Lindsey Collins, ASC's theater education coordinator, edited the hourlong production that streamed its premiere on YouTube Thursday evening. It was a ticket-only event, but the cost of admission -- $7 for members and $10 for non-members -- was worth every penny.

For those who missed the debut of "Mirror, Mirror'', there are 7 p.m. performances today and Sunday.

Basically, it's the story of an aging queen who is jealous of the up-and-coming beauty. A twisted evil spell and plot ensue, which includes dwarfs; a wart; poison apple and resulting coma; a bad haircut and a handsome prince; a willing suspension of disbelief'; and, spoiler alert, an upbeat ending.

Key to all is a mirror that allows the characters to communicate with each other -- there's even a little remote romance.

Collins' job was as critical in this production as was Earnest-Lakes's role as director. Their finished product is a bit-tongue-in-cheek, anachronistic and fast-paced. In short, it's fun to watch.

Earnest-Lake managed to inspire the cast, from the Thumper and Crying Baby, played by Emery Commerford, to elementary students and young adults, often at the disadvantage of live rehearsals with fellow cast members.

Because of the pandemic, most of the 31 actors practiced and worked against a green screen alone, but many of these same youngsters grew up with YouTube and TikTok, so 29-year-old Earnest-Lake decided to use that to her advantage.

Still, the lone performances "made it more difficult," Earnest-Lake said last week prior to her ASC debut as director, but one of her favorite theater sayings, "Adapt and conquer," kept her focused and on track.

In a modern twist on the classic tales, the characters can communicate with each other through their mirrors, much like Facetime.

"It's a lot of fun, and it's a really super-cute take on a fairy tale. It's definitely sticking with the current times," Collins said.

One regret, Earnest-Lake said, is: "I wish we could have been together for this event. I wish I could have given them all hugs and seen their parents handing them flowers."

The whimsical fairy-tale backdrops were painted by artist Crystal Jennings, and Collins managed to seamlessly stitch the scenes together into a cohesive story.

Both performed their jobs with attention to detail, and although it's a blend of several different traditional fairy tales such as Snow White, Cinderella, Rapunzel and more, the stories break and continue at the right points. Thus, the beloved, familiar storylines are easy to follow.

Much of the credit to the play's success goes to its talented cast, and more impressive because there hasn't been a major ASC children's theater performance in more than a year.

As the Evil Queen, Lily Jennings is obnoxious, impatient and expressive -- in other words, simply delightful -- and Magic Mirror, played by Lanie Lopez, is perfect as Evil's counterbalance. Mirror's character is cynical, quick with the biting comebacks and sooth-filled observations that are often missed by the Queen.

Layla Hoskins is a charming Cinderella's Fairy Godmother, a little rough around the edges clad in rocker leather and a touch of a Bronx-like accent, but she reassures Cinderella, played by Zoey Newcomb, of her own beauty, saying, "I see a lovely young woman any prince would be honored to dance with."

In a quirky moment, Butterscotch the mouse, played by Tenley Rodriquez, cons Fairy Godmother out of a bit of cheese for her role in Cinderella's story.

Prince Dashing, played by Travar Ambler, and Prince Charming, played by Matthew Nguyen, were both dashing and charming, and of course heroic in the end.

As part of the happy ending and wrap-up, Mirror offers an observation of a 21st century pandemic: "Life wasn't exactly a fairy tale every day. ... But it won't be long before everything goes back to normal. I was glad we can be together this way."

Tickets are $7 for ASC members and $10 for nonmembers, and ticket holders will receive a video link and viewing instructions before showtime. 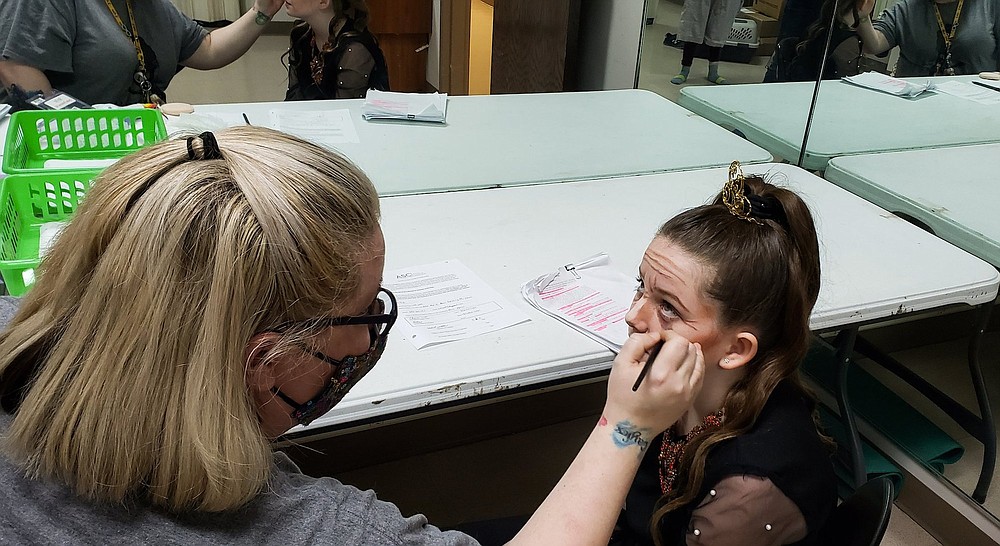 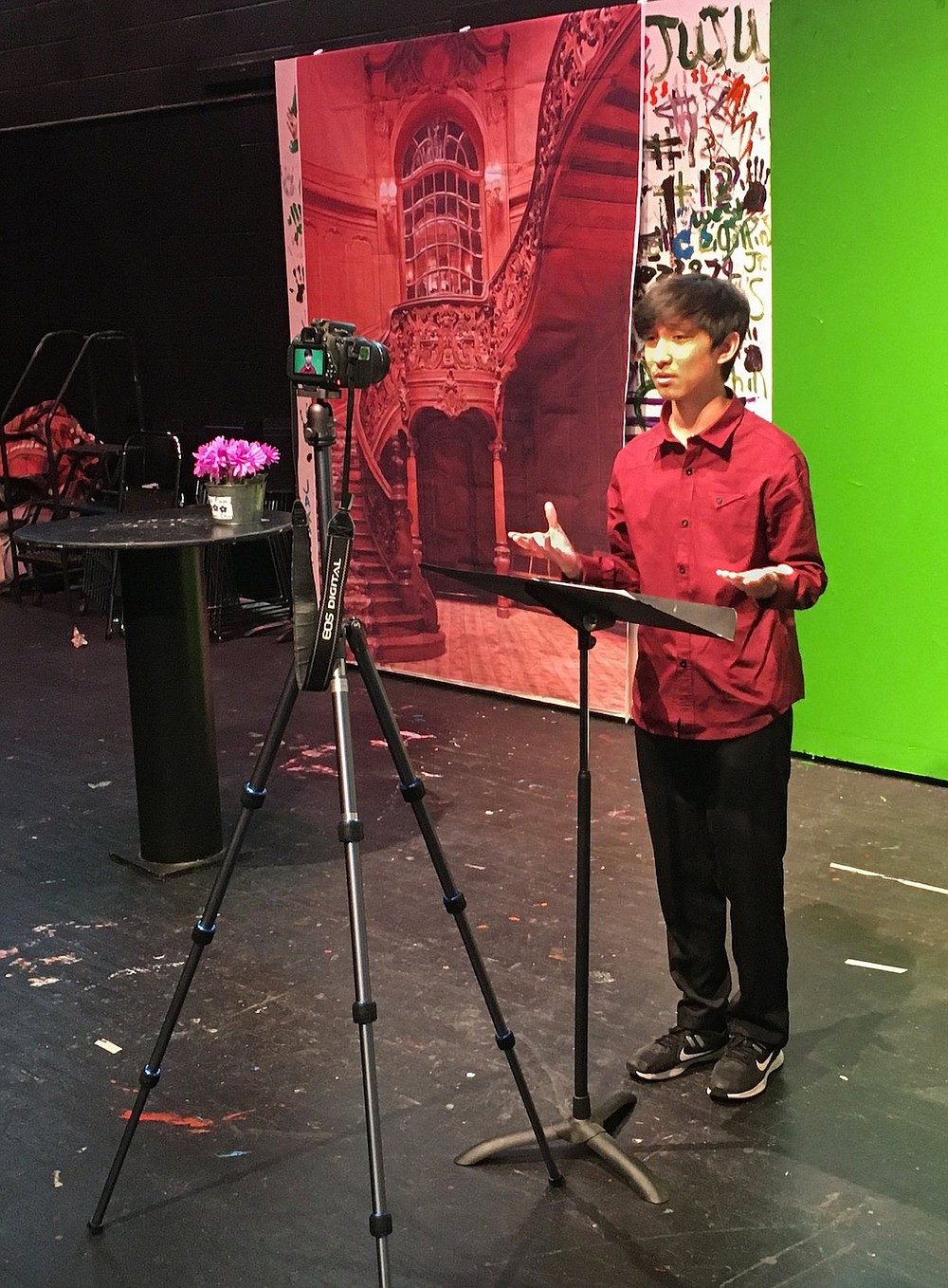 Matthew Nguyen portrays Prince Charming during the filming of “Mirror, Mirror on The Wall” (Special to The Commercial)
ADVERTISEMENT