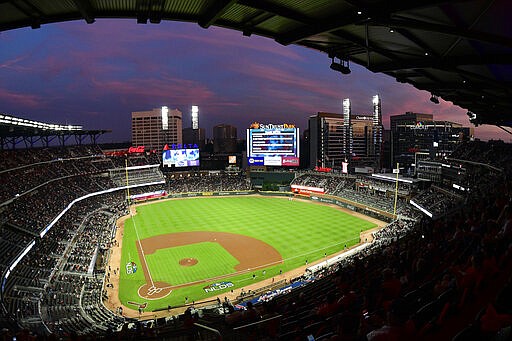 Ground crews prepare the field at Sun Trust Park, now known as Truist Park, ahead of Game 3 of Major League Baseball's National League Division Series between the Atlanta Braves and the Los Angeles Dodgers in Atlanta in this Oct. 7, 2018, file photo. (AP/John Amis)

The league had faced the unsettling prospect of marking the annual April 15 celebration of Jackie Robinson becoming the first modern Black player in the major leagues, and an All-Star week dedicated to former Atlanta Braves great Henry Aaron, while the state's voting law widely seen as targeting Black voters loomed.

"I have decided that the best way to demonstrate our values as a sport is by relocating this year's All-Star Game and MLB draft," baseball Commissioner Rob Manfred said in a statement. "Major League Baseball fundamentally supports voting rights for all Americans and opposes restrictions to the ballot box."

"Fair access to voting continues to have our game's unwavering support," Manfred said.

"Major League Baseball caved to fear, political opportunism and liberal lies," Kemp said in a statement. "Georgians -- and all Americans -- should fully understand what the MLB's knee-jerk decision means: cancel culture and woke political activists are coming for every aspect of your life, sports included."

The MLB had awarded the game to Atlanta and the Braves' Truist Park in May 2019, and it was scheduled for July 13 as part of baseball's midsummer break that includes the Futures Game on July 11 and the Home Run Derby the next night.

The push to move the game had gathered momentum after several large corporations -- notably Coca-Cola and Delta -- condemned the voting law and President Joe Biden said he would "strongly support" moving the event. Pressure also came from civil-rights groups and the Major League Baseball Players Association.

Manfred made the decision after discussions with the association, individual players and the Players Alliance, an organization of Black players formed after the death of George Floyd last year.

The announcement was issued eight days after Kemp signed the sweeping Republican-sponsored overhaul of state elections that includes new restrictions on voting by mail and greater legislative control over how elections are run.

Georgia companies and events have faced growing threats of boycotts from voting rights advocates who say local corporations should have done more to oppose the legislation before it was signed.

Coca-Cola and Delta sharply criticized the new legislation Wednesday, so infuriating Republican leaders that there was a brief attempt to rescind a lucrative tax break that benefited the airline. And David Ralston, the state House speaker, told reporters that he drank a Pepsi, an act of heresy in Coke-dominated Atlanta.

Some critics of the law increasingly have focused on the sporting industry, pushing the NCAA and the World Cup to forgo Georgia for future premier events.

The action is likely to put additional pressure on other leading organizations and corporations to consider pulling business out of Georgia, a move that both Republicans and Democrats in the state oppose despite fiercely disagreeing about the new voting law.

Baseball's decision arrives as other states are moving closer to passing laws that would further restrict voting.

Georgia Democrats had not called for a boycott of the game but were building pressure on the organization and other Georgia corporations to oppose the new voting law.

Atlanta Mayor Keisha Lance Bottoms predicted the MLB's decision is "likely the first of many dominoes to fall, until the unnecessary barriers put in place to restrict access to the ballot box are removed."

Manfred's announcement ended several years of planning by the Braves organization, who said Friday that it was "deeply disappointed" by the action.

"This was neither our decision nor our recommendation, and we are saddened that fans will not be able to see this event in our city," the Braves said in a statement. "The Braves organization will continue to stress the importance of equal voting opportunities, and we had hoped our city could use this event as a platform to enhance the discussion. ... Unfortunately, businesses, employees and fans in Georgia are the victims of this decision."

"I am disappointed that the game was moved from Georgia," said Democratic state Rep. Teri Anulewicz, who represents Smyrna and the ballpark area in the Legislature. "At the same time, I absolutely understand the disgust and frustration with our leadership in Georgia that ultimately led to this decision."

She had urged the All-Star Game to remain in Georgia and Friday urged other events not to abandon the city.

Stacey Abrams, voting-rights activist and former gubernatorial candidate, said she was disappointed in the MLB's decision but proud of its stance on voting rights. State Republicans, she said, "traded economic opportunity for suppression." She urged events and productions to "come and speak out or stay and fight."

"We are deeply saddened and very disappointed with the decision to move the (game) out of Georgia," Sharon Mason, Cobb County Chamber president and CEO, said Friday in a statement. "Our county, region and state were excited and ready to host fans ... with many events planned.

"This decision will have a negative impact on the frontline workers and local businesses located around Truist Park and our region that were looking forward to the economic boost from these events. It is important that we support our local businesses now more than ever."

Other sports have moved high-profile events because of social issues.

In the early 1990s, the NFL shifted the Super Bowl out of Arizona after the state failed to make Martin Luther King Jr. Day an official holiday.

The NBA moved the 2017 All-Star Game out of Charlotte, N.C., when the league took issue with a state law that cut anti-discrimination protection for gay and transgender people.

The NCAA for years didn't hold championships in states where the Confederate battle flag was officially recognized.

This year's All-Star Game will include honoring Aaron, the Braves' Hall of Famer and former career home run champion who died Jan. 22 at age 86.

"We will continue with our plans to celebrate the memory of Hank Aaron during this season's All-Star festivities," Manfred said. "In addition, MLB's planned investments to support local communities in Atlanta as part of our All-Star legacy projects will move forward. We are finalizing a new host city and details about these events will be announced shortly."

The MLB canceled last year's All-Star Game, which had been scheduled for Dodger Stadium in Los Angeles, because of the late and shortened season caused by the coronavirus pandemic. The 2022 game will be played at Dodger Stadium.

The MLB has awarded the 2026 All-Star Game to Philadelphia as part of the celebration of the 250th anniversary of the Declaration of Independence.

The 1972 All-Star Game was played at Atlanta Stadium (later renamed Atlanta-Fulton County Stadium), and the 2000 game was at Atlanta's Turner Field.

Georgia's new far-ranging election law includes a new ID requirement for mail-in votes, curbs the use of ballot drop boxes and gives the Republican-controlled Legislature more power over local elections officials. It also bans volunteers from handing out food and water to voters waiting in lines and expands weekend voting in some rural counties.

Kemp and other supporters say the overhaul will increase confidence in Georgia's voting system after former President Donald Trump falsely claimed he had won the election.

Election officials, including Republican Secretary of State Brad Raffensperger, say there's no evidence of widespread fraud and three recounts upheld the result. A spate of legal challenges by Trump supporters were tossed out of courts at every level.

Democrats and voting-rights advocates say the restrictions in the new law aim to suppress turnout from minority-group voters after November and January elections ended in GOP defeats in Georgia, once a reliably Republican state.

Information for this article was contributed by Ronald Blum of The Associated Press; by Reid J. Epstein and Nick Corasaniti of The New York Times; and by Tim Tucker, Greg Bluestein and Stephen Deere of The Atlanta Journal-Constitution (TNS). 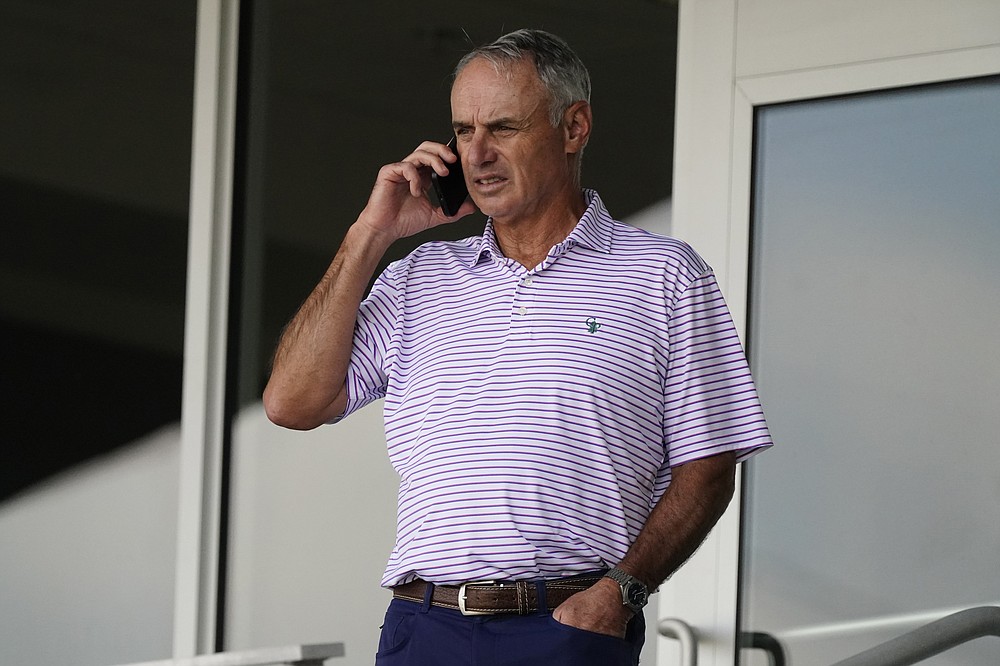