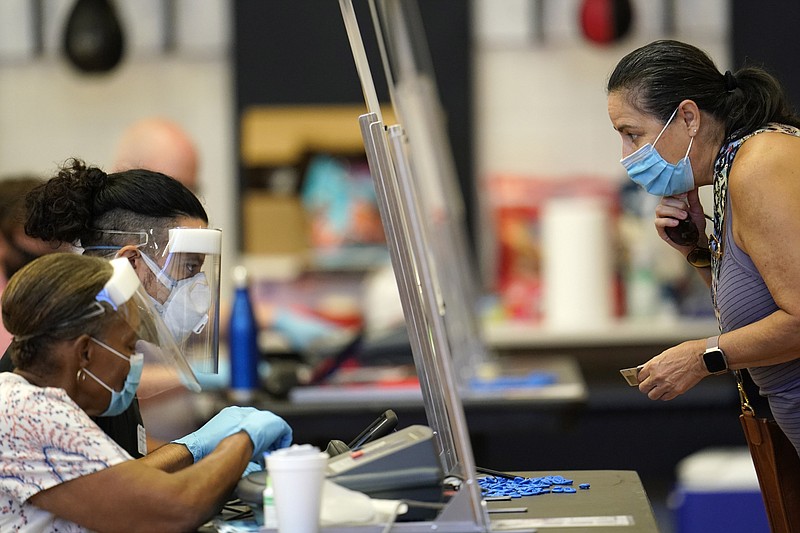 FILE - In this July 14, 2020 file photo, a voter, right, shows her identification to a Harris County election clerk before voting, in Houston. Texas Republicans advanced a slate of proposed new voting restrictions Thursday, April 1, 2021, that would reduce options to cast ballots, limit polling hours and hand more power to partisan poll watchers. All those efforts are rolled into a single bill that cleared the GOP-controlled state Senate — a key marker in a campaign by Republicans, including Gov. Greg Abbott, to impose new restrictive measures over elections in America's biggest red state. (AP Photo/David J. Phillip, File)

AUSTIN, Texas -- The ranks of big corporations now criticizing GOP voting bills spread to Texas as measures that would reduce options to cast ballots and limit polling hours advanced in the state Capitol.

American Airlines, which is based in Fort Worth, came out against what it said were restrictive voting measures that have a favorable path to reaching Republican Gov. Greg Abbott's desk in the coming weeks.

Public opposition from the airline came after a package of sweeping elections changes cleared the GOP-controlled Senate on Thursday -- a day after some of Georgia's most prominent corporate leaders came out publicly against a new election law after civil rights activists criticized their silence.

"To make American's stance clear: We are strongly opposed to this bill and others like it," the airline said in a statement.

Unlike in Georgia, the corporate criticism in Texas came before the voting measures have been signed into law. Corporate interests carry big clout in the Texas Capitol, but Abbott and other Republicans have given no indication of wavering in their pursuit of passing the measures before the session ends in May.

The passage of Senate Bill 7 was along party lines in a vote after midnight.

American Airlines' reaction to the bill advancing was slammed by Republican Lt. Gov. Dan Patrick, the powerful Senate leader. "Texans are fed up with corporations that don't share our values trying to dictate public policy," Patrick said in a statement.

House Republicans on Thursday also began efforts to move a similar bill to the floor, with nearly 200 people signed up to testify at a hearing.

Billionaire Michael Dell, whose tech company is headquartered in suburban Austin, tweeted his opposition to the bill as that hearing unfolded.

Critics of the Texas legislation say the efforts particularly target expanded access put in place during last year's election in Harris County, which is home to more than 2 million voters, controlled by Democrats and a key Texas battleground that includes Houston.

One measure would eliminate drive-thru voting, which more than 127,000 people around Houston used during early voting last year. More than half of those voters were Black, Hispanic or Asian, said Democratic Sen. Carol Alvarado of Houston.

"Hearing all of that, who are you really targeting when you're trying to get rid of drive-thru voting?" she said.

Republicans rejected accusations that the bill was designed to suppress turnout.

The voting packages in Texas mirror a nationwide campaign by Republicans after former President Donald Trump made false claims about election fraud.

In Texas, which already has some of the strictest voting laws in the U.S., the proposed legislation grants more power to partisan poll watchers and eliminates the option to cast a ballot via drive-thru. The bill also includes a provision requiring a doctor's note for people with disabilities who want to vote by mail, though Republicans signaled that language could change.

Trump won Texas but by fewer than 6 percentage points. It was the closest victory by any GOP presidential nominee in Texas since 1996, underscoring Republicans' loosening grip on the state.

After the Georgia bill was signed into law, some of the state's companies were roundly criticized, including by more than 70 Black corporate leaders who took out an advertisement in The New York Times urging corporate America to stand up forcefully on matters of racial justice.

"The entire rationale for this bill was based on a lie: that there was widespread voter fraud in Georgia in the 2020 elections. This is simply not true," Bastian wrote, referring to Trump's claims that he lost because of fraud.

Information for this article was contributed by Acacia Coronado and David Koenig of The Associated Press.