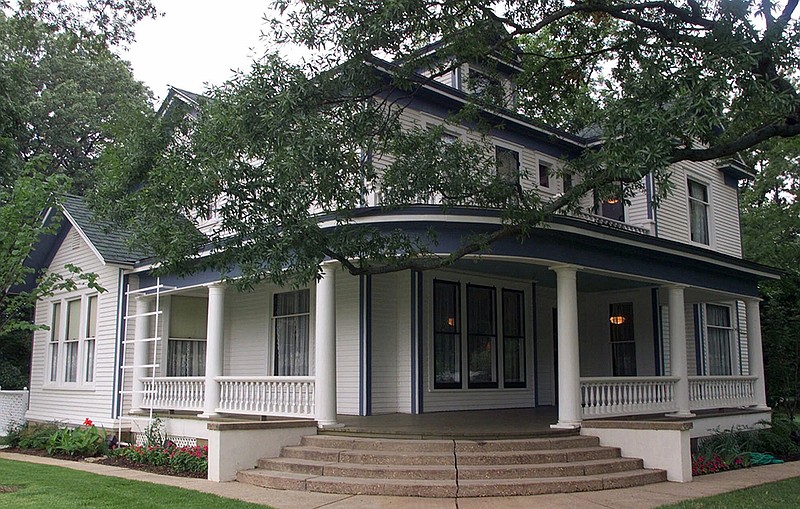 The Pfeiffer House in Piggott was often visited by author Ernest Hemingway and his second wife, Pauline Pfeiffer, whose family lived there. By many accounts, Hemingway liked Piggott, particularly during quail season, and he wrote much of “A Farewell to Arms” in the family hayloft. (AP file photo)

He'd rather be in Piggott than Paris.

Or so Ernest Hemingway wrote in a 1933 letter to Esquire magazine.

Paris was gloomy during his three-week stay that fall.

"Me, I like it better out on the ranch, or in Piggott, Arkansas, in the fall, or in Key West, and very much better, say, at the Dry Tortugas," he wrote.

Hemingway is the title and topic of a three-part, six-hour documentary film by Ken Burns and Lynn Novick. It will begin airing Monday on Arkansas PBS and other Public Broadcasting Service stations nationwide.

Hemingway is often considered the greatest American novelist, Burns said in a video about the making of his documentary.

Pretty much everybody has heard of Hemingway, the swashbuckling outdoorsman author, but many people may not know that he spent some time in Arkansas -- about six months total, estimates Ruth A. Hawkins, former executive director of Arkansas State University's Heritage Sites.

From 1927-40, Hemingway was married to Pauline Pfeiffer, whose parents lived in Piggott. Paul and Mary Pfeiffer moved from St. Louis to Piggott in 1913, shortly after Pauline graduated from high school.

In 1925, Hemingway and Pauline Pfeiffer met in Paris, where she was a fashion writer for Vogue magazine, and he was part of what came to be known as the Lost Generation of American expatriate writers.

Originally from Oak Park, Ill., Hemingway had done a six-month stint as a reporter at The Kansas City Star. And Pauline had graduated from the School of Journalism at the University of Missouri in Columbia.

Hemingway got along pretty well with his in-laws, said Robert W. Trogdon, a professor of English at Kent State University, who served as editor of three of the five books (so far) in Cambridge University's series "The Letters of Ernest Hemingway."

Hemingway complained that you couldn't get a drink in Piggott, but he often invited friends to come and hunt with him there, Trogdon said.

"In fact, his editor Max Perkins came out there in December 1932 to hunt ducks with him," Trogdon said. "He set one story 'A Day's Wait' in Piggott (not mentioned directly). He spent extended periods there while Pauline was recovering from giving birth to her sons: Patrick (1928) and Gregory (1931)."

Hemingway must have warmed up to Piggott by 1932. When he wrote Perkins from Piggott on May 31, 1928, he called it "a Christ offal place."

It was awful hot in Piggott that summer.

In July of 1928, Hemingway wrote Perkins saying "Am damned sick of the heat. Been over 90 degrees almost every day for nearly a month."

Years later, in a 1936 letter to the writer John Dos Passos, Hemingway called Piggott "the disease cultural center of America" because his son Gregory always got sick when he went there (whooping cough, measles, chickenpox, etc.).

Piggott became a base for the Hemingways, who were often traveling between Paris, Key West and Wyoming. They would often leave the kids with the grandparents in Piggott while going off on another adventure.

By many accounts, Hemingway liked Piggott, particularly during quail season. He had a few local hunting and poker-playing buddies.

But he also got some writing work done while he was in Arkansas.

Hemingway wrote a large portion of "A Farewell to Arms" in Piggott during the summer of 1928, Trogdon said. Hemingway dedicated the book to Pauline's uncle, Gus Pfeiffer, who provided the fledgling writer with considerable financial support.

But in Piggott, he was still best-known to the locals as Paul Pfeiffer's son-in-law.

Often bearded, Hemingway would wear shorts and sandals, which made him somewhat of an oddity in Piggott.

He would walk to the downtown square and go to Reve's Drug Store or Smitty's harness shop, which had a still in the back room, said Buddy Bradberry, a volunteer tour guide at the Hemingway-Pfeiffer Museum in Piggott, which is one of ASU's heritage sites.

After a car wreck out West in 1930, Hemingway was back in Piggott for the holidays to rest and recuperate.

He went for a walk one day. As he trudged up Cherry Street hill past the schoolyard, across the street from the Pfeiffer home, kids began to throw snowballs at him, Hawkins wrote in her book "Unbelievable Happiness and Final Sorrow: The Hemingway-Pfeiffer Marriage."

"He had a full scruffy beard," Hawkins said. "He had his arm in a sling. The kids thought he was one of the tramps from the rail station. A lot of people came up to the Pfeiffer home looking for handouts. They thought he just got off the train so they started pelting him with snowballs."

Hemingway hurried to the house and never quite forgot the incident, Hawkins said.

Bradberry said Hemingway normally got along well with the kids in Piggott. When it did snow there, which wasn't often, children would sled down schoolhouse hill, across the street from the Pfeiffer home.

"Ernest got great joy out of pulling the empty sleds back up the hill and giving them a shove to get them started back down the hill," Bradberry said.

Hemingway also let kids borrow his roller skates as long as they promised to be polite and return them to the nail in the barn breezeway wall.

The barn behind the Pfeiffer home is probably the most significant Hemingway site in Piggott.

Hemingway wrote in what had been the hayloft. Spaces between the boards provided some ventilation and a vantage point for kids to peek at the odd man in the Pfeiffer's barn -- a Lost Generation writer in captivity.

After a few years, Virginia Pfeiffer, Pauline's sister, decided to renovate the hayloft into a guest apartment with electricity, running water and a wood-burning stove to provide Hemingway with a more comfortable writer's nook.

One morning in December 1932, shortly after Virginia had completed the renovation, the barn caught fire.

Laud Payne, who for many years was editor of the local paper, saw the fire and raced to the barn to help Hemingway throw manuscripts and other items out the window.

In the fire, Hemingway lost guns, clothes, books and some manuscripts, Hawkins wrote.

"His most important papers and manuscripts survived although they were wet from the fire hoses," Hawkins wrote. "Payne helped lay them out to dry but recalled he never got so much as a 'thank you from Ernest.'"

When the movie version of "A Farewell to Arms" premiered in 1932, Hemingway was hunkered down in Piggott.

Initially, Hemingway was furious because he thought that Paramount would ruin the film with a happy ending in which the heroine doesn't die in childbirth.

After realizing that the movie hewed more closely to what he had written in the book, and after reading positive reviews from the premiere in New York City, Hemingway decided to go to the premiere in Piggott, Hawkins wrote, relaying a story that Virginia Pfeiffer told friends.

"The afternoon of the premiere, however, he went to the town square to hear all the buzz about the upcoming premiere from women gathered at the soda fountain at Reve's Drug Store," Hawkins wrote. "After he overheard two women expressing displeasure about 'Tarzan the Ape Man' being preempted for the special showing, Ernest became furious. He stormed up the hill to the Pfeiffer home and retreated to the barn with a bottle of scotch and got drunk. The family found him in no shape to go anywhere and went without him."

Hawkins said Hemingway was successful in part because of the financial assistance of the Pfeiffers, particularly Gus Pfeiffer, who gave Ernest and Pauline $25,000 (which is $500,000 in today's dollars) to go on safari in Africa. He also bought them a house in Key West.

The safari resulted in the book "Green Hills of Africa" and several short stories, including "The Snows of Kilimanjaro," Hawkins said.

"If it hadn't been for the Pfeiffers, he wouldn't have had many of the experiences that influenced his writings," she said.

Pauline Pfeiffer gave up a promising career as a journalist and served as an editor for her husband, Hawkins said.

Adam Long, the current executive director of ASU's Heritage Sites, said the number of visitors to the Hemingway-Pfeiffer Museum in Piggott increased by 10-fold between 2013 and 2018. He said about 30,000 people visited the museum in 2019, but numbers were down last year because of the pandemic. Long said he didn't know what caused the increase.

Michael Palin, the former Monty Python comedian, might have something to do with it. In 1999, the BBC aired a documentary series called "Hemingway Adventure" in which Palin traveled to places Hemingway lived or traveled.

But Palin's travel itinerary omitted Piggott, which was more of a base camp than a vacation destination for Hemingway.

Still, Hemingway fans find their way to Piggott. Many of them do so during a road trip that also includes another ASU heritage site, Johnny Cash's boyhood home in Dyess, 72 miles south of Piggott.

Long said many people who visit the museum in Piggott are more interested in Hemingway's life than his books.

ASU bought the former Pfeiffer house and barn in 1997, restored them and opened them as a museum in 1999. Long said the entire project cost about $1.5 million.

The museum provides a handy timeline to help people keep track of the comings and goings of Ernest and Pauline: hemingway.astate.edu/history/timeline.

After Ernest and Pauline divorced in 1940, Hemingway had two more wives before he died from a self-inflicted gunshot wound in 1961 in Ketchum, Idaho.

Pauline Pfeiffer died from acute shock in 1951 in Los Angeles.

Sometimes, people walk into the museum in Piggott and retell stories their parents told them about Hemingway's time in the town. But facts sometimes change as they filter down through generations.

Hemingway wrote thousands of letters, many of which have yet to be published.

So he may get the last word. 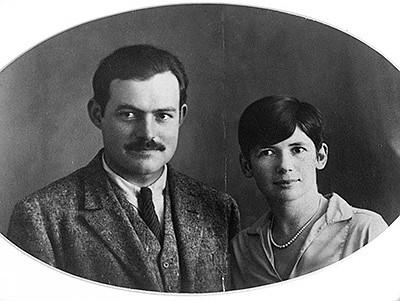 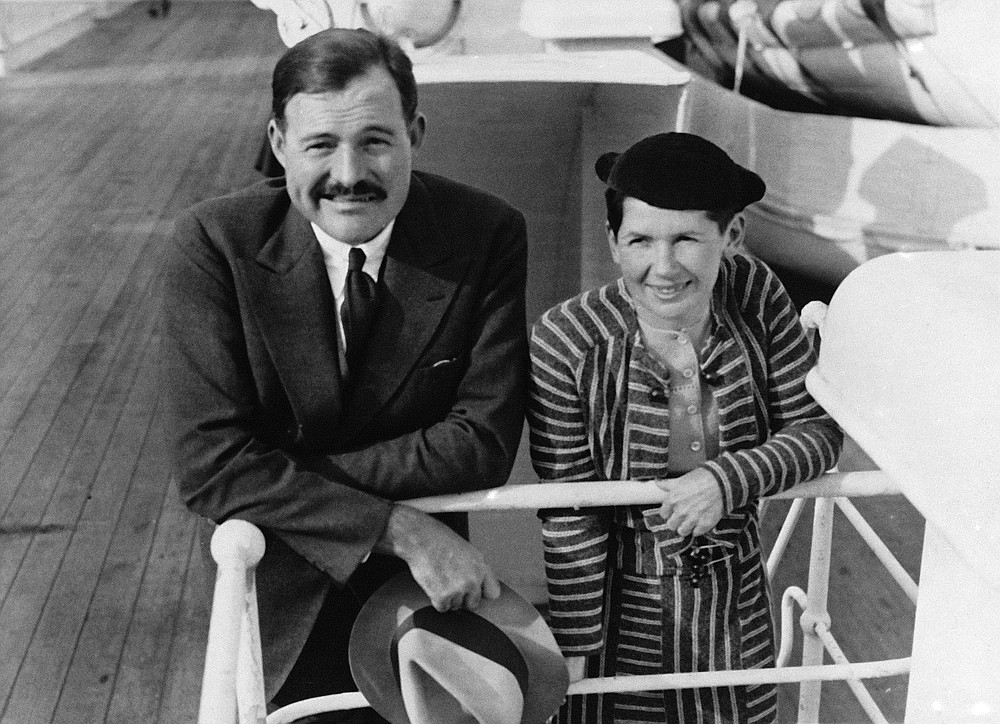 Ernest Hemingway and his wife, Pauline Pfeiffer, arrive in New York aboard the ocean liner Paris on April 3, 1934, after a three-month vacation in eastern Africa hunting lions. Pauline’s uncle, Gus Pfeiffer, paid for the safari, which inspired the book “Green Hills of Africa” and several short stories, including “The Snows of Kilimanjaro.” (AP file photo) 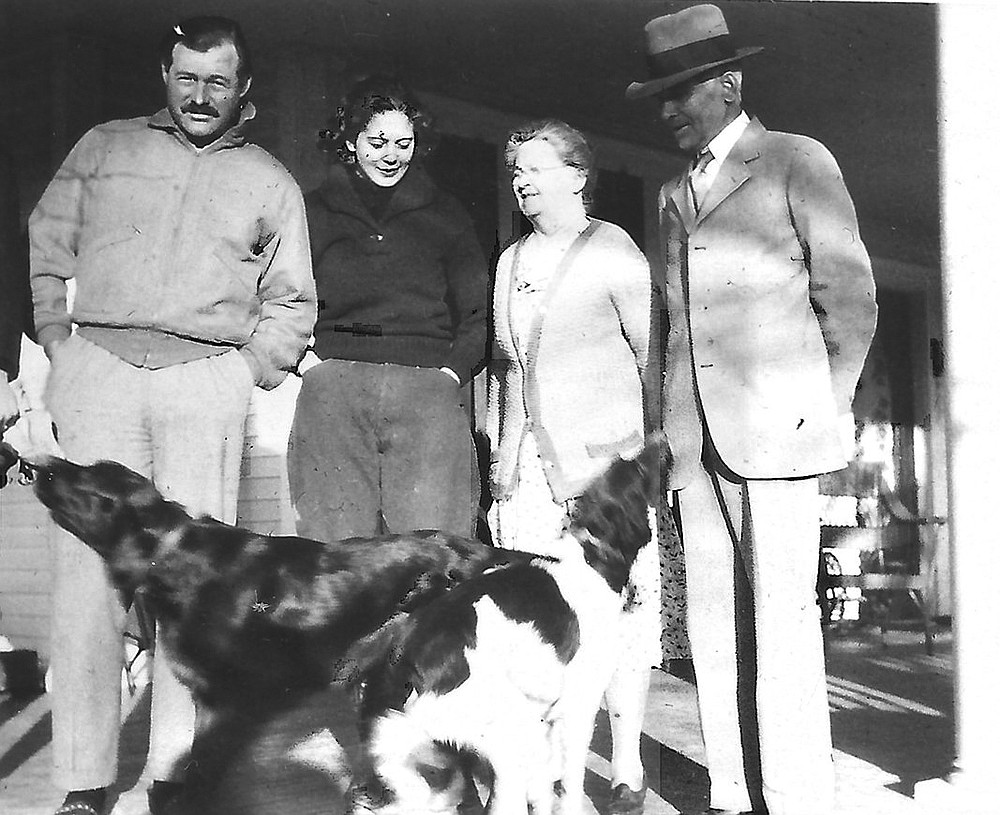 Ernest Hemingway stands on the front porch of his in-laws’ home in Piggott in 1932 with Pfeiffer cousin Barbara Peck (second from left) and Paul and Mary Pfeiffer, parents of Pauline Pfeiffer. Around Piggott, the famous writer was best-known to the locals as Paul Pfeiffer’s son-in-law. (Special to the Democrat-Gazette) 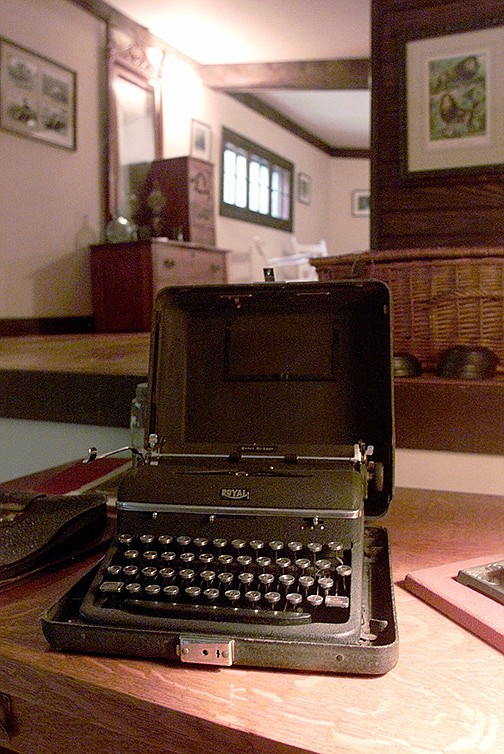 A 1930s-era typewriter sits on the desk used by Ernest Hemingway in a converted barn in Piggott. A fire in the now-restored barn in December 1932 destroyed some of Hemingway’s guns, clothes, books and manuscripts. (AP file photo)
ADVERTISEMENT