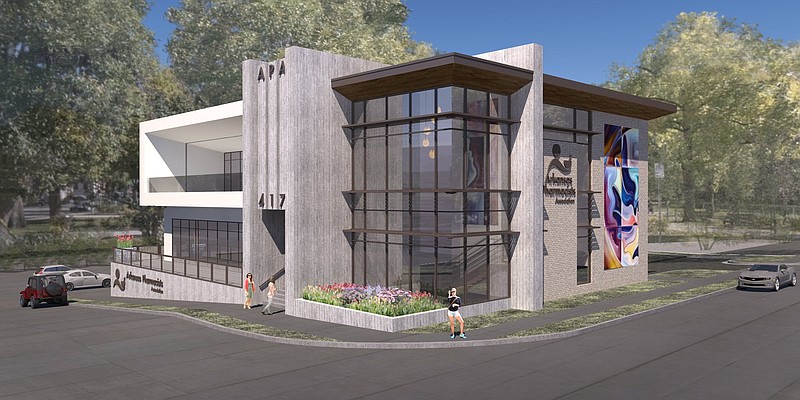 An artist rendering of the proposed new headquarters for the Arkansas Pharmacist Association in Little Rock. Courtesy of RPPY Architects.

A rock thrown during the civil unrest that enveloped downtown Little Rock last summer led to a fire that left the Arkansas Pharmacist Association's past, present and future in ashes.

The deliberately set fire caused more than $500,000 in damage to the association's main building on Victory Street, just a block from the state Capitol, and forced its leadership to assess what was next for the 139-year-old organization.

"It was probable arson," said John Vinson, the association's chief executive officer. "The Fire Department investigated and put out a report, but they did not find a person who started the fire or caused the fire. They were unable to solve that mystery."

All Vinson said he knows is that a large rock was thrown through the front window and a short time later the fire began with a piece of furniture in the corner where the rock was thrown.

"I believe it was intentionally set by someone who wanted to damage our building," he said. "And so does the Fire Department."

A second, smaller building on Capitol Avenue was undamaged and is being used by the association to hold Zoom sessions and one-on-one meetings. Staff members already were working from home part time during the pandemic so not having an office wasn't an inconvenience.

Dean Watts, a pharmacist from DeWitt who was the president of the nonprofit's board at the time, created the aptly named Phoenix Committee to evaluate what happened, what the association's needs were for the next 50 to 100 years, whether the building the association has called home for 34 years should be repaired or the property sold.

The committee recommended, and the board agreed, that the association should remain on Victory Street, given its role as an advocacy and lobbying organization for its 2,400 member pharmacists, pharmacy technicians and associate members. The prominent spot had served the organization well, the committee members agreed, and the property has a great view of the Capitol.

"I mean the Capitol is not going anywhere, right?" Vinson said. "It's a beautiful, historic building literally on the other side of a parking lot. We felt like that was one of our greatest assets.

"If we take that property and turn it into what we could envision for the next hundred years, that would be the ideal scenario."

That's what the association is trying to do, at a cost of $2.5 million to $3.5 million. Construction of a two-story building on the site of the existing building likely will begin this summer, according to Vinson.

The association retained architect Timothy Yelvington of the Little Rock firm of Roark Perkins Perry Yelvington Architects to develop a design that would meet the association's needs now and in the future.

The association also hired an owner manager -- Lisa Turpin of Colliers Arkansas -- to help it negotiate the path forward.

"We think they hit a home run," Vinson said of the resulting design. "We're very excited about the way it's played out, the space it would give us and having that front room view of the Capitol dome will really be a beautiful addition to the city of Little Rock."

The design, double the size of the existing buildings, features a second-floor covered 1,000-square-foot balcony on the building's west side with the view of the Capitol. The balcony takes its inspiration from the American Pharmacists Association headquarters on the National Mall in Washington, which has a view of the Lincoln Memorial and Washington Monument, Vinson said.

The plans won the approval of the Capitol Zoning District Commission, which regulates building specifications, such as height, around the Capitol building.

The next steps include completing the plans with a structural engineer, submitting them for bid to invited contractors and fundraising. Vinson said he expects that in addition to an insurance settlement and contributions, financing part of the cost likely will be part of the package.

"We haven't exactly gotten to the point of what the financing would look like," he said. "We will likely talk to various banks and internally with our board about how to finance that. Before we make that decision, we'd like to get the bids back to see exactly what the cost is."