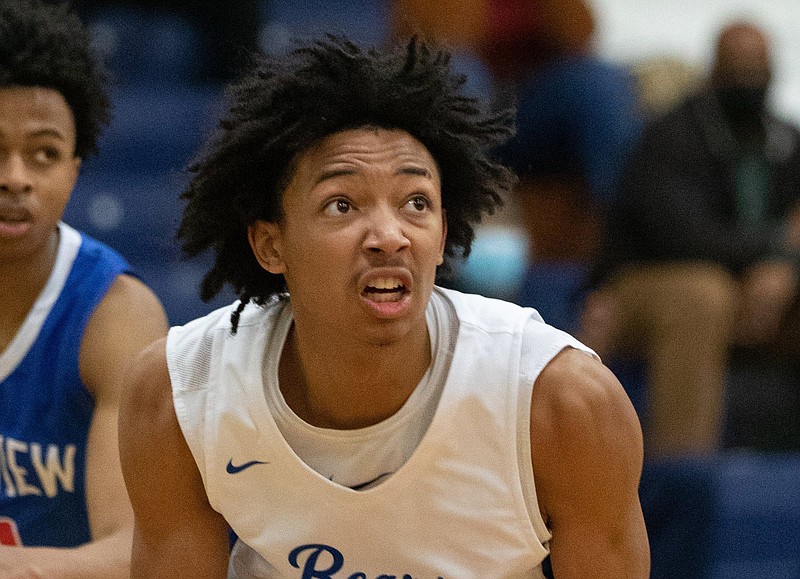 Sylvan Hills junior Nick Smith, who is rated as one of the nation’s top players for the 2022 recruiting class, averaged 25 points, 5 rebounds and 4 assists per game this season, despite facing double and triple teams throughout the season. (Arkansas Democrat-Gazette/Justin Cunningham)

There's no beating around the bush when Sylvan Hills Coach Kevin Davis says Nick Smith is worth the price of admission. It's a proclamation he stands behind.

Smith's performance the past two seasons doesn't leave much room for argument.

"Sometimes I find myself just sitting back and watching him do his thing," said Davis, who's been a coach for nearly three decades. "People think he's just a scorer, but we're talking about a kid who's become a complete player that makes plays for his teammates. Standing on that sideline, there were times where I shook my head and said to myself that I've got to go back and look at the video because what he just did, I don't know how he did it.

"And that's with a shot, a pass, deflection. He puts the work in on every aspect of his game, and he delivers."

Smith undoubtedly packaged everything in his arsenal and brought it with him nightly this season for Sylvan Hills. The 6-4, 170-pounder, who is the Arkansas Democrat-Gazette All-Arkansas Preps Boys Player of the Year this season, averaged 25 points, 5 rebounds and 4 assists per game for a Bears team that finished 24-4 and was on the cusp of playing for a state title.

The junior put together multiple 30-point efforts and had noteworthy game-winning shots, including a three-pointer with only a few seconds left to send Sylvan Hills past Little Rock Parkview on Feb. 26.

Smith regularly was double-teamed and occasionally stared down triple-team coverage, which allowed him to showcase his play-making ability.

"We faced a lot of adversity actually, and no one really knew about it," Smith said. "We had a lot of odds stacked against us, but I think we did well. The trust level came a long way because at the beginning of the season, we didn't have that same bond that we had at the end of it.

"Sometimes, though, things just don't go your way in games. But I still thought we had a good year, and if I had to grade us, I'd give us B-plus."

"He's going to get his," Parkview Coach Scotty Thurman said of Smith shortly after the Patriots beat the Bears 51-49 in the 5A-Central Conference tournament final last month. "You've got to try to make things tough for him, make him take and make tough shots."

Davis said it's Smith's ability to hit difficult baskets that makes him one of the nation's most coveted recruits in the Class of 2022.

"I've done this for 26 years, and his degree of difficulty on shots is something else," Davis said. "Scoring the ball is not easy, but for a kid like Nick, he makes some of the most difficult shots. This is a guy that can go get you a basket in the most unorthodox ways that you can imagine. And he finishes.

"He shot over 60% from the field, too. To go as fast as he goes and finish shots with such a delicate touch on the ball, whether he's got to use English on it or a soft touch. He's got the complete tool bag to be able to do those things."

Playing under strict covid-19 guidelines, the Bears had separate 11- and 12-game winning streaks and captured a regular-season league title. During the Class 5A state tournament, Smith had 20 points, 9 rebounds and 7 assists in a 76-68 first-round victory over West Memphis before duplicating that point output and providing the go-ahead basket with 42 seconds left in a 43-42 victory over Pine Bluff in the quarterfinals -- the same round the Bears lost in a year ago.

In the semifinals against conference rival Maumelle, Smith had 30 points, but it wasn't enough during a 70-64 loss.

"Things didn't fall for us," Smith said of that game. "But for us this year, we all realized how the game could get taken away from you quick because of covid. So we all put in extra time in the gym and just stuck with each other throughout the season, no matter what.

"Of course, we all wanted to win that state title, though, don't get me wrong."

That possibility exists next season, one in which Davis said he expects Smith to be a box-office attraction again.

"I talk to the whole team about being ready for big moments because they come at a little bit faster pace than your regular high school kid is accustomed to," Davis said. "The Bears, we're going to play fast, but when you have a player like Nick and drop him in our system, you're really going to get to see something special."

NOTEWORTHY Ranked No. 43 by ESPN and No. 29 by 247Sports nationally for the Class of 2022. … Has offers from schools such as Arkansas, North Carolina, Baylor, Kansas and Texas. … Followed up a 44-point game against Jacksonville on Feb. 2 with a 34-point, 8-rebound, 7-assist and 4-steal outing against Little Rock Christian three days later. … Averaged 21 points, 3 rebounds and 3 steals per game as a sophomore. … Was named the Arkansas Democrat-Gazette All-Arkansas Preps Underclassman of the Year last season. 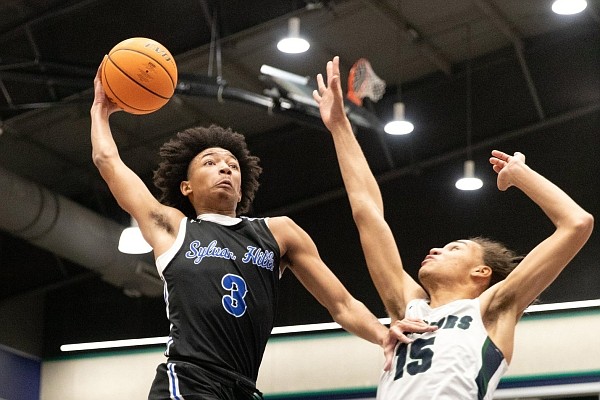