Francis, Wildcats not snowed under 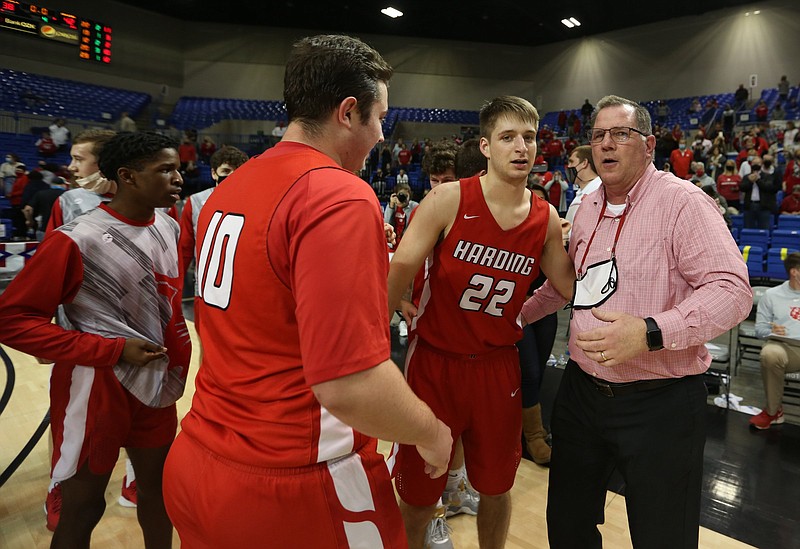 Late February's snowstorm hit every high school basketball team in the state in some way.

Games were postponed or canceled. Practices were lost. Time at the season's most critical juncture evaporated.

Brad Francis knows his Harding Academy team was far from the only one that felt the ramifications of the winter weather. But in a matter of a little more than 24 hours, the snow threatened to wipe away all the good of a 14-5 regular season.

The Wildcats, after losing back-to-back district tournament games to Clinton and Pangburn, had to play Manilla in a win-or-go-home game in the first round of the Class 3A Region 2 tournament.

And if beating a 20-6 team wasn't going to be hard enough, doing it on that team's home floor ratcheted up the pressure that much more.

"We approach each year with the goal of getting to state -- that's our goal and we talk about what's the easiest path we can take to get there," Francis said. "All of a sudden, we were not taking the easy path to get there. We were taking the hard path."

That hard path began with a 62-52 victory at Manilla and it ended 16 days later as Harding Academy lifted the Class 3A boys state title at Bank OZK Arena in Hot Springs. As much a credit as it is to the Wildcats' veterans -- 10 players were either seniors or juniors -- the run to a second state title in nine seasons likely doesn't come to fruition without Francis, the Arkansas Democrat-Gazette All-Arkansas Preps Boys Basketball Coach of the Year.

There are few as ingrained with the Searcy community as Francis. He was the girls basketball coach for seven years at Harding Academy -- taking the Lady Wildcats to the state championship game in 1991 -- before becoming the women's coach at Harding University.

He returned to Harding Academy and claimed a championship with the boys basketball team in 2013, one of only two basketball crowns for a school that has won eight football titles.

Yet championship thoughts weren't necessarily there for a team with 13 of its 17 players coming off a football season in which the Wildcats claimed yet another 3A title.

"When we won it in 2013, the expectations were probably a little bit higher than maybe they were with this group," Francis said. "When you look at what we lost, we lost a lot of size and a lot of scoring, so I think there were a lot of questions coming into this season.

"Again, I credit our seniors. I'm not sure they felt that way, but I think a lot of people did, especially from the outside."

The lack of early-season practice that comes with a deep football postseason run showed in the opening weeks. Harding Academy lost at Izard County and Little Rock Southwest on its way to a 4-4 start.

But narrow wins on last-second shots against Pangburn and Clinton gave Francis the belief his team would turn things on.

The Wildcats would lose just once more, save for those two district tournament defeats, getting revenge on a Newport team they lost to twice in their regional final. And the experience of tight games early on paid off -- Harding won all four of its state tournament games by eight or fewer points, coming back from down nine in the fourth quarter to knock off Mayflower in the title game.

"We're not real fancy in the way we do it," Francis said. "Just a lot of hustle plays and a lot of fundamentals and making some free throws at the end of the game -- just taking it one game at a time and next thing you know, there we are."