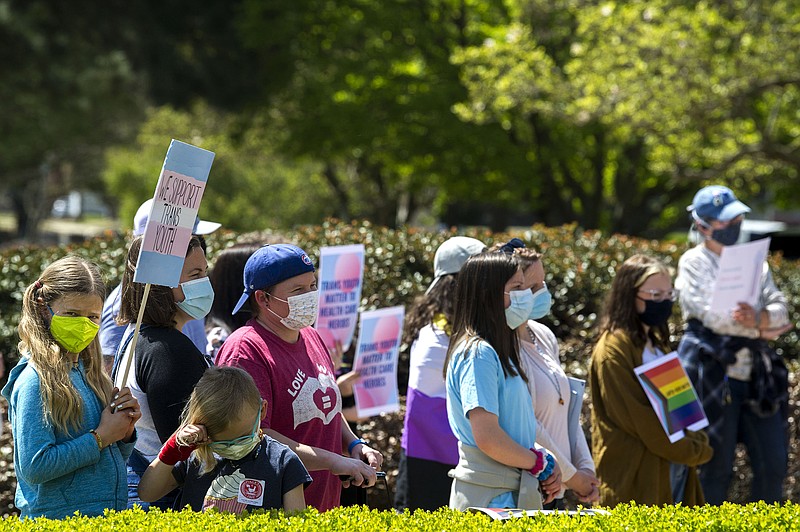 Protesters gather at the steps of the Arkansas State Capitol on Saturday, April 3, 2021 to call for Governor Hutchinson to veto HB1570, which they say would prohibit health care providers from providing or referring youth to evidence-based, gender-affirming health care services. See more photos at arkansasonline.com/44protest/ (Arkansas Democrat-Gazette/Stephen Swofford)

Arkansas is currently a scary state for her to live in, said Bee Golleher, a nonbinary 14-year-old from Benton.

But Bee felt "loved" Saturday at a gathering of about 200 people on the steps of the state Capitol, protesting a bill that would ban gender-affirming health care for transgender and nonbinary youths like Bee.

"It means a lot to me as a parent, especially since I have a trans child, to see so many [medical] professionals support trans youth," Leah Golleher said.

If Hutchinson signs House Bill 1570, which the state Legislature passed March 29, Arkansas would be the first state to prohibit doctors from providing health care to youths who do not identify with the gender they were assigned at birth.

Gender confirmation surgeries and hormone prescriptions would be illegal to provide to anyone younger than 18 in Arkansas, and doctors would face jail time for violating the law. More than a dozen other state legislatures are considering similar bills.

Hutchinson signed a bill March 25 that bans transgender female athletes from participating in girls' and women's sports. The governors of Tennessee and Mississippi have signed the same bans into law.

Health care professionals and transgender individuals stated repeatedly at the rally that gender-affirming health care saves lives and that House Bill 1570 is rooted in bigotry. Chad Rodgers, a gay pediatrician and an Arkansas native, noted that transgender youths have higher risks of drug use, suicidal thoughts and targets of violence.

"The simple act of calling someone by their preferred name, using their preferred pronouns, letting them dress [as] the gender they say they're most comfortable with reduces those risks," Rodgers said.

Carmen Angelica, a 24-year-old transgender woman who will graduate from nursing school in May, said she asked her doctor to prescribe her puberty blockers when she was 15, but the doctor "laughed it off." She was not able to start transitioning until she was 18.

"Families of transgender youth and [health care] providers are making informed decisions about what's best for them in evidence-based practice," Angelica said. "These decisions are not based in politically correct pretense or fantasy. It is the evidence, and it is the reality."

Arkansas Children's Hospital is home to the Gender Spectrum Clinic, which specializes in treating transgender and nonbinary children with individualized gender-affirming health care plans. Michele Hutchison, a pediatric endocrinologist who co-founded the clinic, said she has a simple question for anyone who doubts whether trans identities are real.

"Would you go through puberty twice?" she asked the crowd.

Michele Hutchison said she had a meeting and an in-depth conversation with the governor on Wednesday, in which he listened and asked "very good, insightful" questions, leaving her "cautiously optimistic" that he might not sign the bill. The governor has not publicly stated whether he supports the bill.

"Whatever his decision is, I feel that he's definitely put a lot of thought into it," Michele Hutchison told the Arkansas Democrat-Gazette after the rally.

John Landosky of Little Rock held up a sign that read "Legislating Brain Drain," and he told the Democrat-Gazette that he and his wife, a pediatrician, took their 6-year-old twins to the rally as a lesson in standing up for what is right.

Elizabeth Henry-McKeever, a priest at St. Michael's Episcopal Church in Little Rock, attended the rally with her 4-year-old son, James, and held a sign that read "This pastor stands with trans kids."

"Our tradition teaches that everyone is beloved in the eyes of God, and we believe part of that belovedness is all people having access to their basic needs, which includes appropriate health care," Henry-McKeever said.

Bee expressed appreciation for the people of all ages attending the rally, and Bee's parents said it was good to see an in-person expression of support for transgender youths in Arkansas instead of just in social media posts.

"It's starting to create a safe place in a state that doesn't feel very safe right now," Bee said.