Going to Europe this summer? Here are options 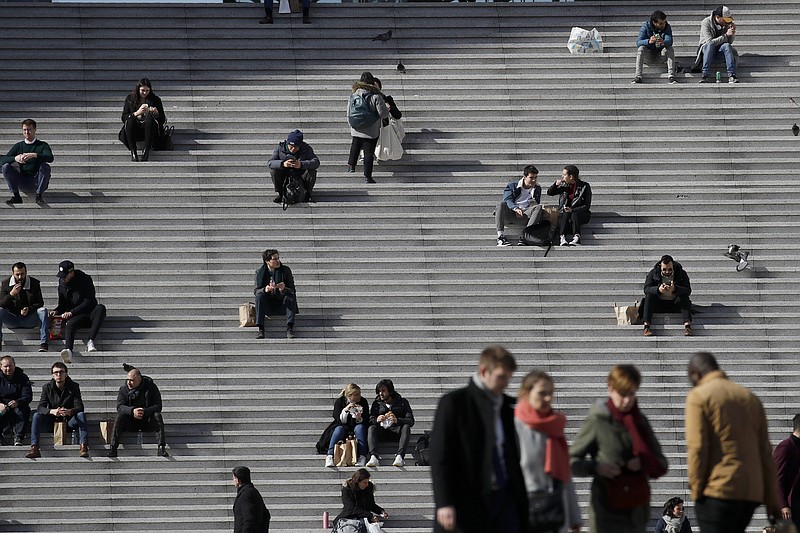 People walk and take a rest at the business district of La Defense outside Paris on March 12, 2020. Some European countries have started to welcome vaccinated travelers, including American tourists; others are making preparations to ease restrictions in time for the summer season. But France, along with Belgium and Portugal, has reintroduced measures that restrict nonessential travel. (AP/Christophe Ena)

With the number of people in the United States vaccinated against the coronavirus climbing, Americans are starting to explore their prospects for international travel this summer, a season when Europe is traditionally a big draw.

Most of Europe has been off-limits to most U.S. citizens for more than a year, and the continent is currently grappling with a third wave of coronavirus infections and a surge in new, more contagious variants, making it unclear when its borders will reopen. But some European countries have started to welcome vaccinated travelers, including American tourists, and others are making preparations to ease restrictions in time for the summer season.

Vaccine and health certificates that would help speed travel are under development, which could make it easier for tourism to restart. The 27 member countries of the European Union have endorsed the idea of a vaccine certificate. While individual European countries will still set their own rules, the initiative is expected to establish a coordinated approach across the continent.

"Finally, we have a tangible solution to coordinating and harmonizing travel measures," said Eduardo Santander, chief executive officer of the European Travel Commission, an association of national tourism organizations based in Brussels. "I think other countries like the U.S. will also come up with their own technological solutions that will be compatible, and after a period of trials this summer, a global standard will be established."

In the United States, the Centers for Disease Control and Prevention is still recommending against travel — even for those vaccinated — citing the risks of catching and spreading the virus while away from home. And ultimately, the course of the virus will determine what travel looks like across the world. But here is what we know about how European countries are preparing to restart tourism.

Q: I want to go to Europe this summer. Who will let me in?

A: Last summer, when the United States reported more coronavirus infections and deaths than any other country, Americans were barred from entering the European bloc for vacation.

There have been a few exceptions: Turkey has been letting U.S. citizens enter if they produce evidence of a negative covid-19 polymerase chain reaction (PCR) test before departure, as has Croatia and several countries that are not members of the European Union, including Albania and Armenia.

As the number of cases has risen in Europe and vaccinations have been sluggish, several EU countries have gone back into lockdown. France, Belgium and Portugal have reintroduced stringent measures that restrict nonessential travel even from within the bloc and within what is known as the Schengen Zone, which includes nonmember countries that allow free movement across their borders.

"Right now, in some European countries, it might feel like you are in the middle of a storm, which is how we felt in the [United Kingdom] a couple of months ago," said Gloria Guevara Manzo, CEO and president of the World Travel & Tourism Council, a forum that works with governments to raise awareness about the travel industry.

"But I think once we accelerate the vaccination rollout while applying strong safety protocols and testing, then by the summer we will be in a situation where European countries will be able to open up around the same time," she added.

But that is likely to be for travel within Europe rather than between Europe and the United States.

"The current focus is on opening up internal markets within the EU and U.K. and then, depending on reciprocity agreements, more countries will be included," said Eric Dresin, secretary-general of the European Travel Agents' and Tour Operators' Association. "But right now, we are not talking about Americans visiting Europe."

American travelers do have some options, though: Having brought the virus under control, Iceland is allowing all vaccinated travelers — including those from the United States — to enter without being subject to covid-19 testing or quarantine measures.

Greece, one of the most popular European summer destinations for Americans, announced in March that it would reopen for all tourists in mid-May, as long as they show proof of vaccination, antibodies or a negative covid-19 test result before traveling. All visitors will be subject to random testing upon arrival.

Turkey said it would not require international travelers to be vaccinated this summer and will reevaluate testing policies after April 15.

Other European countries such as Slovenia and Estonia are letting in vaccinated tourists, but not those from the United States.

Spain, which relies heavily on tourism for its economy, said it would reopen to international visitors in the spring, once between 30% and 40% of its adult population are vaccinated. Portugal is also hoping to reopen its borders by May, but it is not yet clear whether Americans will be allowed in.

Q: What about Britain?

A: Americans were never barred from entering the United Kingdom, which left the EU last year during the pandemic, and can visit today but face strict testing and quarantine requirements. In England, where a 10-day quarantine is required, the time can be reduced if a person presents a negative covid-19 PCR test on day five.

Most of Britain is under strict lockdown, and while a stay-at-home order was lifted Monday, most shops, restaurants and pubs will stay closed until at least mid-April. Scotland has started to ease restrictions and will continue to do so in phases.

Domestic tourism and indoor dining are not expected to resume until May 17 at the earliest. In anticipation of restrictions being lifted, several cruise lines have announced "staycation sailings" around the British Isles starting in June.

Many Britons traveled last summer when the virus seemed to have ebbed, and a recent study found that they brought a significant number of infections back into the United Kingdom. A ban on British travel abroad for leisure was enacted Jan. 4 and was expected to expire in May, but the government introduced legislation last week that lays down the legal framework to extend the restrictions until the end of June.

It is not clear when exactly the United Kingdom will lift its quarantine requirements for more tourism, but Visit Britain forecasts a slow recovery that will start toward late summer.

Q: Will I need proof that I am vaccinated to enter Europe?

A: Earlier last month, the European Commission proposed a digital travel certificate that would prove that a person has been vaccinated, received a negative covid-19 test result or recovered after contracting the virus.

To travel to the EU, you will have to tick one of the three boxes.

The document, known as a Digital Green Certificate, would allow EU residents and their family members to travel freely within the bloc's member states. The commission is also working to coordinate with the World Health Organization to ensure that the certificates are compatible with systems in countries outside Europe.

The documents would be free and available in digital or paper format, and if approved by the European Parliament, the bloc plans to roll them out within three months.

Non-European Union nationals will be able to request a Digital Green Certificate from the member country they plan to visit. The rules for proof of vaccinations will be the same as for EU nationals: Vaccines that the bloc has authorized will be accepted, and individual member states will be able to decide whether to accept others.

"The Digital Green Certificate will not be a precondition to free movement, and it will not discriminate in any way," said Didier Reynders, the bloc's top official for justice. "A common EU approach will not only help us to gradually restore free movement within the EU and avoid fragmentation. It is also a chance to influence global standards and lead by example based on our European values like data protection."

Q: If I do go, what happens when I return to the United States?

A: Currently, all airline passengers age 2 and older traveling to the United States must provide a negative covid-19 viral test (nucleic-acid amplification test [NAAT] or antigen test) taken within three calendar days of travel. States have different quarantine requirements, so travelers should check what their state requires before booking a vacation abroad.