Hidden Gems: In times that try readers' souls, comedy can be the best relief 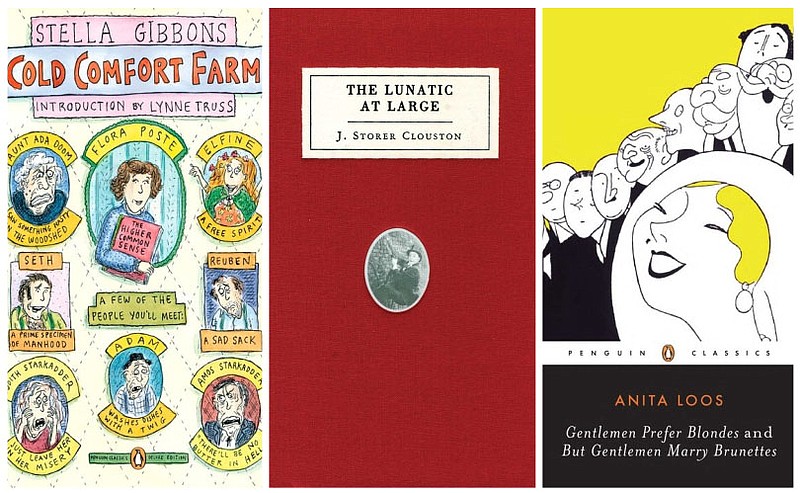 I suppose that every generation feels, at some point, that "these are the times that try men's souls." Certainly, the past year alone has assailed each of us with the fear of covid infection, loneliness, the death of loved ones and sickening instances of racial and ethnic injustice. To these can be added climate disasters, humanitarian crises, terrifying gun atrocities and our nation's increasing political discord. All are deeply serious matters, most needing energetic attention right now.

Yet knowing this, even the most activist among us will occasionally grow weary from the daily onslaught of angst. Is there no refuge, however temporary, from our brutal zeitgeist? Far too rarely does contemporary fiction and nonfiction provide the needed escape, regularly being gloomy, earnest and replete with finger-pointing and breast-beating.

At the risk of sounding unduly flippant, I want to put in a good word for books that contribute to what Samuel Johnson called "the gaiety of nations" and "the public stock of harmless pleasure." I'm talking about wholly frivolous comic fiction.

For many readers, the first and foremost proponent of the subgenre is P.G. Wodehouse, whose accounts of upper-class twits effervesce with smile-inducing similes: "She came leaping towards me, like Lady Macbeth coming to get first-hand news from the guest-room." Almost as well known among connoisseurs are E.F. Benson's Mapp and Lucia novels -- starting with "Queen Lucia" -- and such humorous masterpieces as Jerome K. Jerome's "Three Men in a Boat (To Say Nothing of the Dog)," Anita Loos's "Intimate Diary of a Professional Lady," the immortal "Gentlemen Prefer Blondes" and Stella Gibbons's "Cold Comfort Farm," which features, among its many other pleasures, old Ada Doom's eerie, never-explained catchphrase: "I saw something nasty in the woodshed." Still, there are many other, less familiar examples of delightfully inconsequential fiction, and one of the best is "The Lunatic at Large," by the prolific J. Storer Clouston. It's a treat.

First published in 1899, but now available in a modern edition (McSweeney's/The Collins Library), "The Lunatic at Large" opens at Clankwood, which "bore the enviable reputation of containing the best-bred lunatics in England." One night, under mysterious circumstances, a new inmate, apparently named Francis Beveridge, is delivered to the asylum. Though suffering from amnesia, he turns out to be unflappably polite, irresistibly charming and quite frisky with the nurses. Think of Peter O'Toole in the film "My Favorite Year."

Inevitably, Beveridge -- who clearly isn't deranged or in any way threatening -- escapes from Clankwood and makes his way to London, where he shaves off his beard and mustache and assumes the new last name of Bunker. In need of funds, he rapidly ingratiates himself with a visiting German aristocrat, the rich, kindly and naive Baron Rudolf von Blitzenberg, whose titles include that of "hereditary carpet-beater to the Bavarian Court."

The lonely Baron yearns for excitement, and this his imaginative companion readily provides, one madcap or mildly risque escapade following another, culminating in the German being mistaken for a bomb-throwing anarchist. At this point, the two friends quickly repair to the holiday resort of St. Egbert's-on-Sea.

There the Baron meets and falls in love with the beautiful Lady Alicia, which causes some temporary difficulties since she had earlier assisted the erstwhile Beveridge with breaking out of Clankwood. Aiming to advance his friend's suit, Bunker suggests that the infatuated nobleman pretend to fall seriously ill. During a sickroom visit by Alicia and her mother, Lady Grillyer, the latter suspiciously demands, "'What is the matter with the Baron?'

"Mr. Bunker saw that there was nothing for it but heroic measures.

"'The dog was destroyed at once,' he replied, with intense gravity. 'It is therefore impossible to say exactly what is the matter.'

"'The dog!' cried the two ladies together.

Needless to say, such a smooth operator is never at a loss, even when he finally regains his memory and discovers his true identity.

Because Clouston's book so enchanted me, I quickly acquired battered copies of its first three sequels, "Count Bunker" (1905), "The Lunatic At Large Again" (1922) and "The Lunatic Still At Large" (1924). Here's a teaser for "Count Bunker."

Five years have passed, and a somewhat plumper Baron von Blitzenberg returns to London as an attache to the German Embassy. While happy in his marriage to Alicia, the Baron sighs for a little more fun in his life. He consequently dines secretly with his old friend Bunker and, through that trickster's baleful influence, soon finds himself in a Scottish castle, passing himself off as its new laird, Lord Tulliwuddle. What of his Teutonic accent? A fashionable affectation, honoring the royal family's German origins.

Before long, the Baron, assisted by "Count Bunker," must confront not only the spectral Wraith of the Tulliwuddles but also the double temptation of a romantic highland beauty and an alluring American heiress. Meanwhile, back in London, the formidable Lady Grillyer arrives for a visit with her daughter. As Clouston reminds us, "this paragon among mothers and peeresses was a lady of majestic port, whose ascendant expression and commanding voice were commonly held to typify all that is best in the feudal system; or, in other words, to indicate that her opinion had never been contradicted in her life." When Alicia explains that the Baron is away on a secret diplomatic mission, Lady Grillyer quickly concludes that something fishy is going on.

I'll stop there. Rest assured, however, that Clouston unites all his characters in a frantic, Keystone Kops-like finale, with marriage vows intact and no hearts broken. On his last page, his two scapegrace heroes duly toast each other and "a creed even merrier than Socialism, more convivial than Total Abstinence, and more perfectly designed for human needs than Esperanto -- the gospel of 'Cheer up.'" These days, we can all drink to that.

‘The Lunatic at Large’