Kemp continues to grow into her role at Morrilton 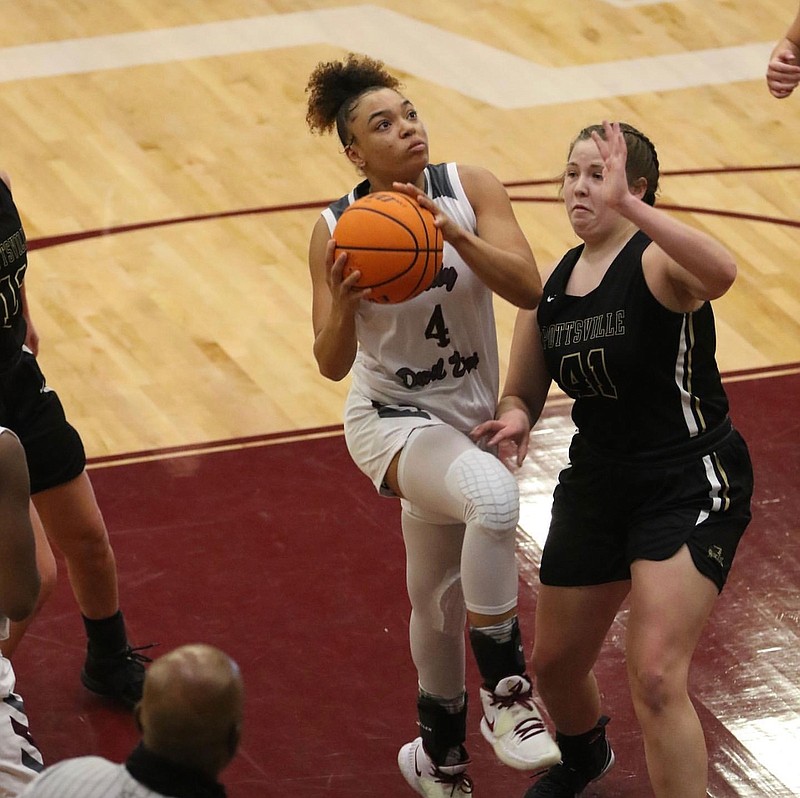 Morrilton sophomore Cheyanne Kemp had to take over at point guard full time for a period during the season, which helped her game, according to her coach. (Photo courtesy of Cheyanne Kemp)

It's hard to lack confidence when you average 18 points per game for a state semifinalist. It's even more difficult when you're drawing attention from major conference college programs such as North Carolina, Arkansas, Oklahoma and Vanderbilt.

Rewind to this time last year, and that was not Cheyanne Kemp.

She was a freshman last season on a Morrilton girls basketball team that failed to make the Class 4A state tournament, a new face afraid to step on toes and be the point guard that the Lady Devil Dogs needed.

Now Kemp is an all-conference, all-state and all-state tournament honoree with plenty more awards expected to come her way over the next two seasons at Morrilton.

The latest is the Arkansas Democrat-Gazette All-Arkansas Preps Girls Underclassman of the Year.

"It's overwhelming [to be honored] because you just go out and play the game," Kemp said. "You really don't expect to get that much exposure, so it's both rewarding and overwhelming at the same time."

Kemp's coach, Carin McNabb, said she expected the transition to the high school level to take some time. She'd watched Kemp dominate, particularly offensively, at the junior high level, but figuring out when to lean on certain elements of her game a year ago didn't come naturally for Kemp.

Things became a bit clearer this season when junior Grace Brown missed four games due to covid-19. Kemp, who had split time with Brown as the Lady Devil Dogs' point guard, was thrust into the role in the middle of the season. Morrilton closed the season with 19 consecutive victories before losing in the Class 4A state semifinals to eventual champion Harrison.

"It really helped her grow and understand a little bit more about the game of basketball," McNabb said of Kemp's time strictly running point. "She had to be the one that facilitated the offense and scored, and that's tough for a point guard sometimes.

"We talked a lot more about this situation and that situation, so she grew just basketball IQ-wise having to play just point guard those two weeks and now she's comfortable playing either spot."

Morrilton didn't need Kemp on a nightly basis, but in big spots the sophomore was there to remind folks of the player she's becoming.

In the Lady Devils Dogs' final game of the season, Kemp scored 25 of Morrilton's 48 points.

"This year I had to have confidence," she said. "At the end of last year when we started our playoff run, my teammates would get a little nervous and they would look to me to score the ball and I didn't have the confidence. But this year, I feel like I did a better job of trusting my teammates trusting [in] me, and it gave me the confidence to take that next step."

Despite in-state scholarship offers from the University of Central Arkansas and Arkansas State University, she'll have a chance to gain significant exposure over the summer when she plays for Mavs Elite -- a program that has recently featured names such as Conway's Jordan Danberry (Mississippi State), North Little Rock's Kennady Tucker (North Carolina) and Little Rock Central's Kiara Williams (University of Arkansas).

But Kemp said the goal of a state title trumps any individual accolades. Morrilton will return three starters next season, including its soon-to-be junior point guard.

"She's got to get more comfortable with being a vocal leader," McNabb said. "She's such a nice kid -- everybody likes her, she's got a great personality. She's not yet comfortable to where she's telling people where to be.

"She's working hard on the defensive [end], she can guard when she wants to. For me, for her, for us in the future, she's got to continue to get better at realizing when to shoot the three, when to drive, when to pull up at the rim, and be more fluid and confident in all three of those aspects of her game."

Kemp at a glance