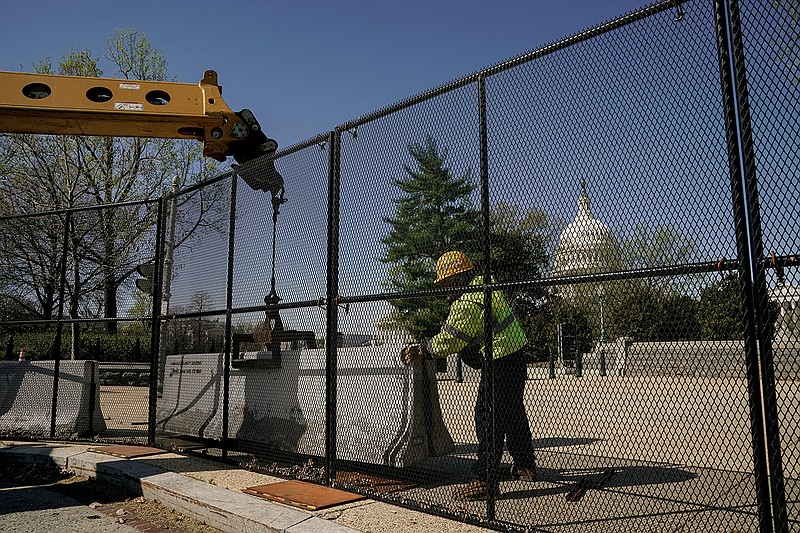 Cement barriers are installed in front of security fencing around the U.S. Capitol on Saturday as Capitol police struggle to find the best way to protect the building and those who use it. (The New York Times/Amr Alfiky)

WASHINGTON -- The man who rammed a car into two officers at a barricade outside the U.S. Capitol, killing one of them before he was shot to death by police, had been suffering from delusions, paranoia and suicidal thoughts, a U.S. official told The Associated Press on Saturday.

The attacker's family, meanwhile, expressed condolences and said he "was not a terrorist by any means." In a statement issued Saturday, the family said he appeared to have been suffering from "depression and potential mental illness."

Video of the Friday afternoon attack shows the driver emerging from the crashed car with a knife in his hand and starting to run at the pair of officers, Capitol Police acting Chief Yogananda Pittman told reporters. Police shot the man, 25-year-old Noah Green, who died at a hospital.

Investigators are increasingly focused on Green's mental health as they work to identify a motive for the attack, said the U.S. official, who was not authorized to speak publicly about an ongoing investigation and spoke to the AP on condition of anonymity. The official said investigators had talked to Green's relatives, who spoke of his increasingly delusional thoughts.

In online posts that have since been removed, Green described being under government thought control and said he was being watched. He described himself as a follower of the Nation of Islam and its longtime leader, Louis Farrakhan, and spoke of going through a difficult time when he leaned on his faith. Some of the messages were captured by the group SITE, which tracks online activity.

[Video not showing up above? Click here to watch » https://www.youtube.com/watch?v=hvwWcHRnCsQ]

It was the second line-of-duty death this year for the Capitol Police, which is still struggling to heal from the January insurrection. The Friday attack underscored that the building and campus -- and the officers tasked with protecting them -- remain potential targets for violence.

Police identified the slain officer as William "Billy" Evans, an 18-year veteran who was a member of the department's first responders unit. According to a neighbor, he was the father of two children.

His family has asked for privacy to mourn, and memorial or funeral plans have not been announced.

The other officer suffered injuries not believed to be life-threatening and was hospitalized Friday.

House Speaker Nancy Pelosi, D-Calif., hailed Evans as a "martyr for our democracy," while Senate Majority Leader Charles Schumer, D-N.Y., said he was "heartbroken." Pelosi and Schumer both spoke with members of Evans' family Friday.

President Joe Biden said in a statement that he and his wife were heartbroken to learn of the attack and expressed condolences to Evans' family. He directed that flags at the White House be lowered to half-staff.

On Saturday, the Capitol Police said on Twitter that the department "is deeply grateful for the support we've received from around the world. We wish we could respond to each one of you. Please know your sympathy is appreciated beyond words."

Green's relatives said in the statement Saturday that they "feel great sympathy for the officer whose life was taken and the other injured during these events." They said they "were just as taken aback as the rest of the nation from this horrific event."

On Friday, Brendan Green told The Washington Post that his brother, who had been a defensive back on the Christopher Newport University football team, had slid into deep paranoia. Noah Green's family and friends said that he blamed people he knew for drugging him with Xanax and that he later became addicted.

In the statement Saturday, Green's family described him as a "strong man, a college graduate, an upcoming finance guru, a beloved friend, son, brother and uncle and athlete of the community."

The relatives said Green had been studying for a master's degree in business administration and was "growing into a very established man of society."

After graduating from college, the family said, "he began to experience hardships among his peers" that may have stemmed from repeated head trauma during his years of playing football.

The family did not elaborate on any injuries Green may have suffered or say whether he had been in medical care or had any diagnoses.

They said Green had a strong, supporting family and that he probably "fell ill to the multitude of problematic situations that surround us in today's society."

The latest deadly breach of the Capitol's perimeter could delay the gradual reopening of the building's grounds to the public just as lawmakers were looking at a return to more normal security measures after the January insurrection.

Friday's crash and shooting happened at a security checkpoint near the Capitol that is typically used by senators and staff members on weekdays, though most were away during the current recess. The attack occurred about 100 yards from the entrance to the building on the Senate side of the Capitol.

The area was locked down for hours Friday but has since reopened, and National Guard troops stood outside the building Saturday.

The attack came less than two weeks after the Capitol Police removed an outer fence that had temporarily cut off a wide swath of the area to cars and pedestrians, blocking major traffic arteries that cross the city.

Police have left intact a second ring of fencing around the inner perimeter of the Capitol as they struggle to figure out how to best protect the building and those who work in it. That tall, dark fencing -- parts of it covered in razor wire until recently -- is still a stark symbol of the fear that many in the Capitol felt after the mob laid siege three months ago.

Lawmakers have almost universally loathed the fencing, saying the seat of American democracy was meant to be open to the people, even if there was always going to be a threat.

But after Friday's attack, some said they needed to proceed with caution.

"It's an eyesore," Democratic Rep. Tim Ryan of Ohio said of the fencing. "Nobody wants that there. But the question is, is the environment safe enough to be able to take it down? In the meantime, maybe that fence can prevent some of these things from happening."

Ryan, chairman of a House spending committee that oversees security and the Capitol, stressed that no decisions had been made and that lawmakers would be "reviewing everything" after the latest incident. His committee and others are looking at not only the fence but also the staffing, structure and intelligence capabilities of the Capitol Police.

"The scab got ripped off again here today," Ryan said. "So we've got to figure this out."

Ryan said his committee was doing extensive research and even had a recent call with Israeli security officials to learn how they keep their government secure.

"We've got to figure out what the sweet spot is with the security," he said.

Schumer said in a statement Saturday that Evans' death "has only added to the need to address security at the Capitol in a comprehensive way" after the January breach. Along with Ryan's House panel, two Senate committees have been looking into what changes need to be made.

"This may just cause everybody to pump the brakes a bit on taking the fence down entirely because of the sense of security that it provides us," said Democratic Rep. Jennifer Wexton of Virginia, another member of the spending panel that oversees the legislative branch.

As a lawmaker who represents the suburbs of Washington, Wexton said, she wants to see the Capitol open to visitors again. While the indoor parts of the building have been closed to the public for the past year because of the coronavirus pandemic, the plazas, roads and sidewalks that surround the Capitol were cut off only after the riot, keeping the public completely away from the area.

"I would like to see it come down at the earliest possible moment," Wexton said of the fencing.

While lawmakers were initially supportive of the fencing to secure the area and of the thousands of National Guard troops sent to the Capitol to back up the overwhelmed police force, they soon said they were ready for a drawdown.

Security officials, though, say the Capitol cannot return to what had been the status quo. Pittman, the police chief, in February told lawmakers that "the Capitol's security infrastructure must change." 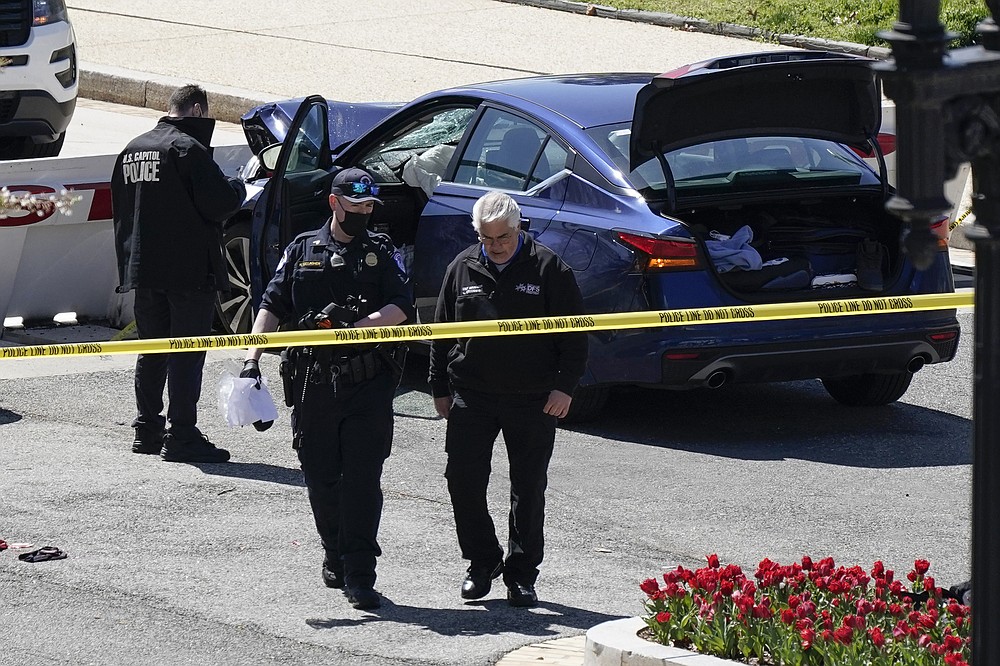 U.S. Capitol Police officers near a car that crashed into a barrier on Capitol Hill in Washington, Friday, April 2, 2021. (AP Photo/J. Scott Applewhite) 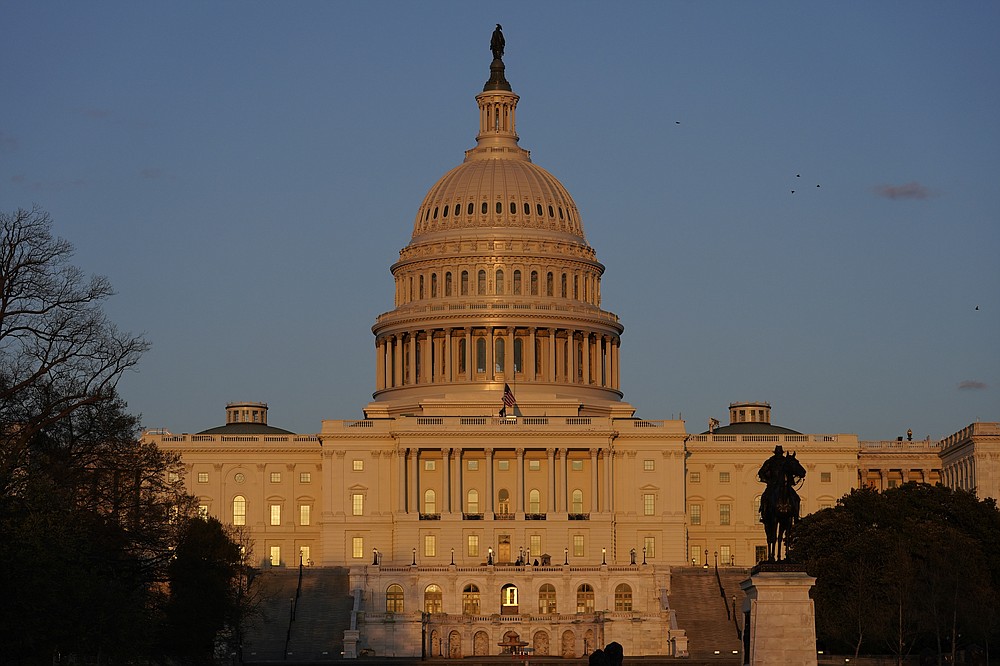 The American flag at the U.S. Capitol flies at half-staff in honor of Capitol Police officer William Evans who was killed after a man rammed a car into two officers at a barricade outside the U.S. Capitol in Washington, Friday, April 2, 2021. (AP Photo/Alex Brandon) 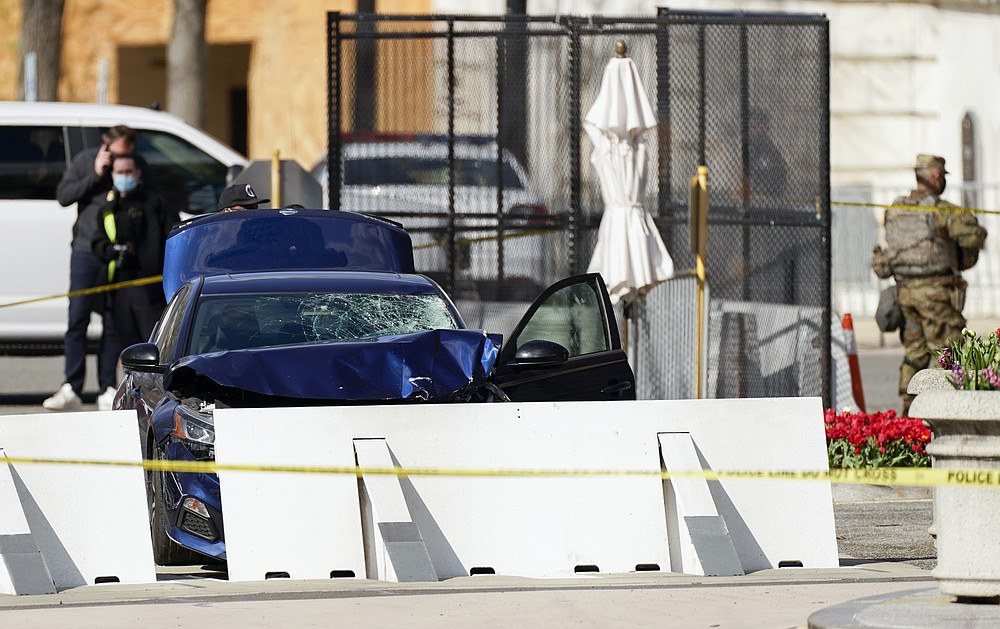 The car that crashed into a barrier on Capitol Hill is seen near the Senate side of the U.S. Capitol in Washington, Friday, April 2, 2021. (AP Photo/Carolyn Kaster) 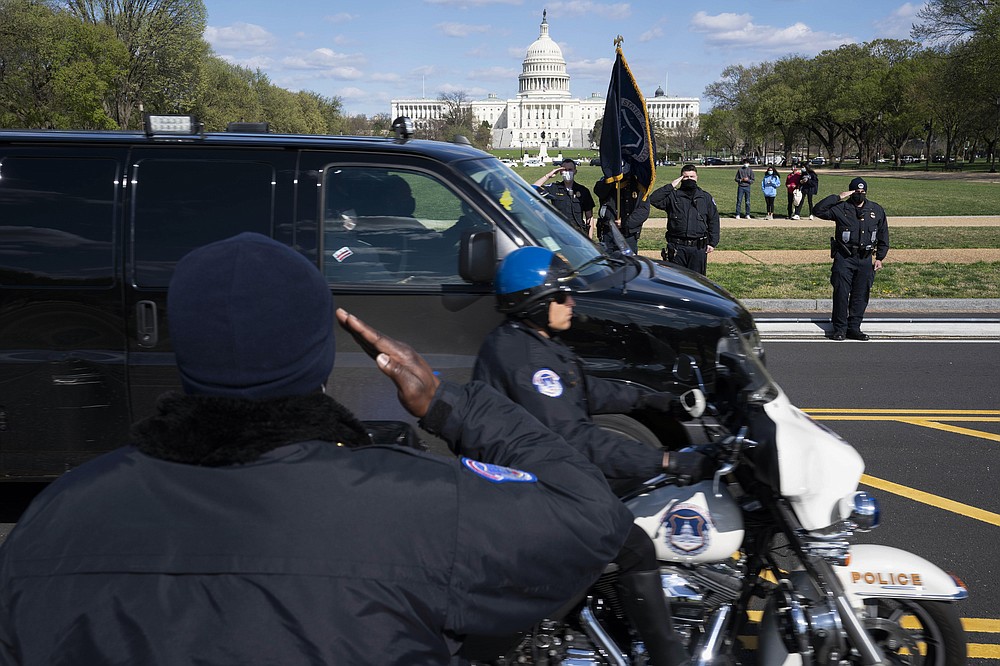 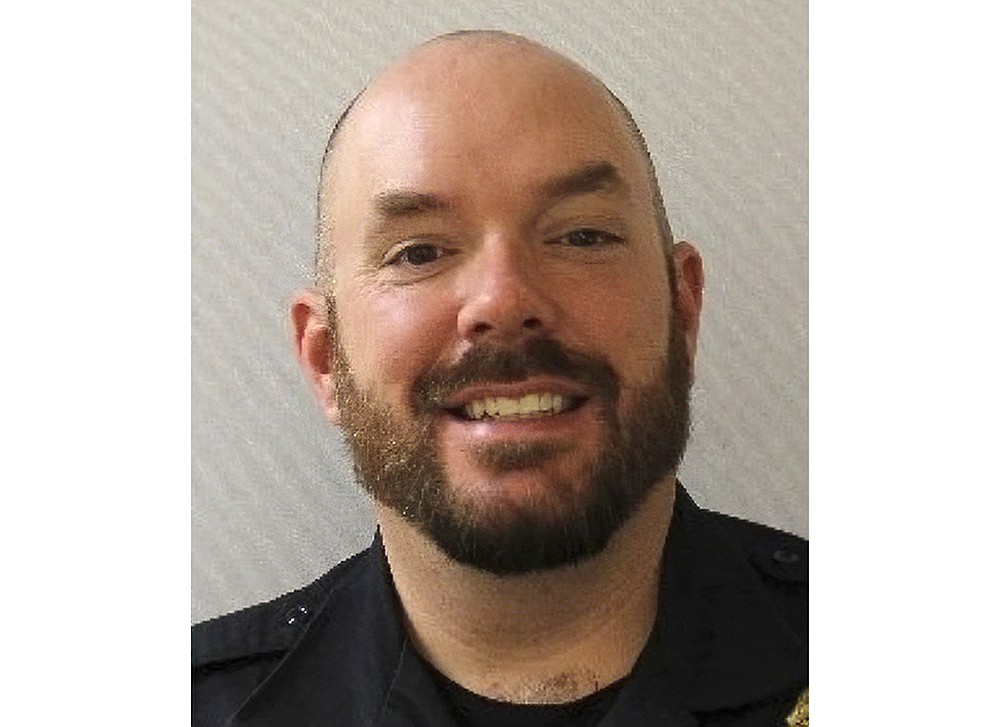 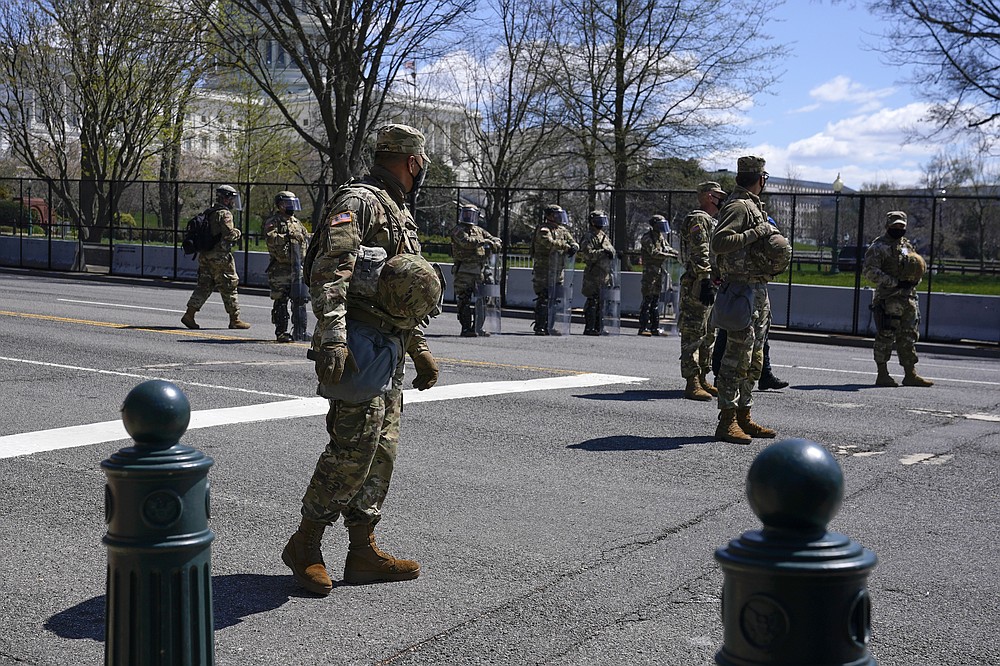 Troops stand guard near the scene of a car that crashed into a barrier on Capitol Hill in Washington, Friday, April 2, 2021. (AP Photo/Patrick Semansky) 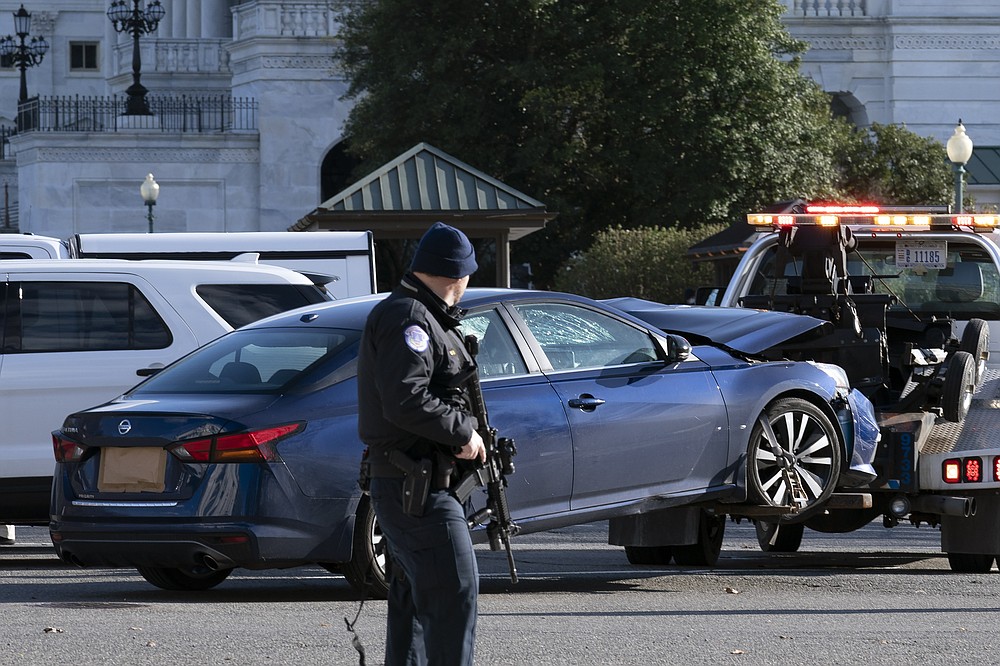 Authorities tow a car after a man rammed it into a barricade on Capitol Hill in Washington, Friday, April 2, 2021. (AP Photo/Jose Luis Magana) 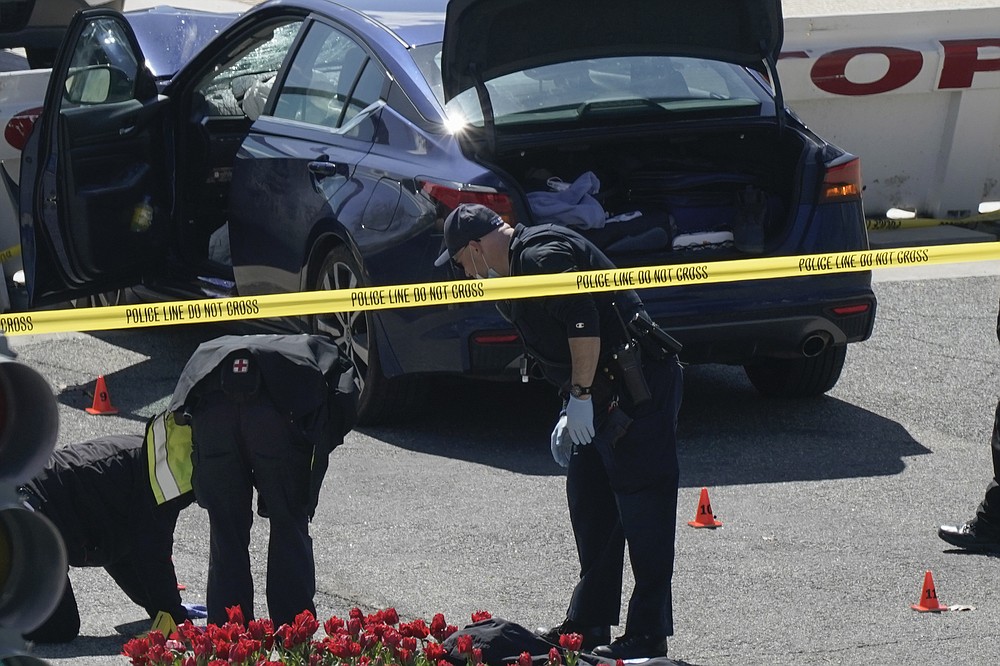 U.S. Capitol Police officers investigate near a car that crashed into a barrier on Capitol Hill near the Senate side fo the U.S. Capitol in Washington, Friday, April 2, 2021. (AP Photo/J. Scott Applewhite) 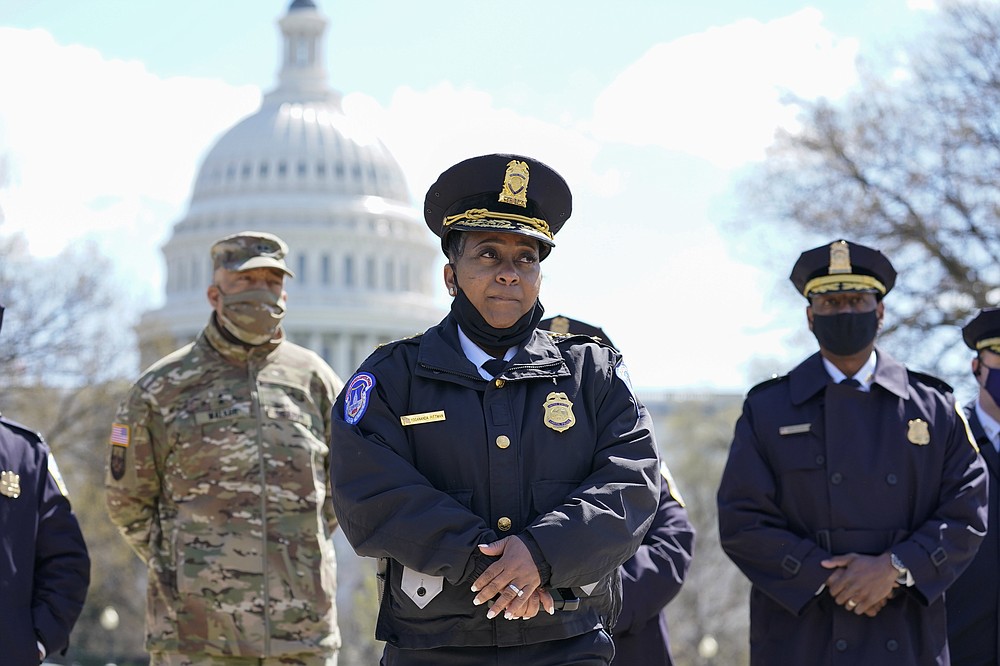 Acting chief of the U.S. Capitol Police Yogananda Pittman listens during a news conference after a car crashed into a barrier on Capitol Hill near the Senate side of the U.S. Capitol in Washington, Friday, April 2, 2021.(AP Photo/Alex Brandon)
ADVERTISEMENT