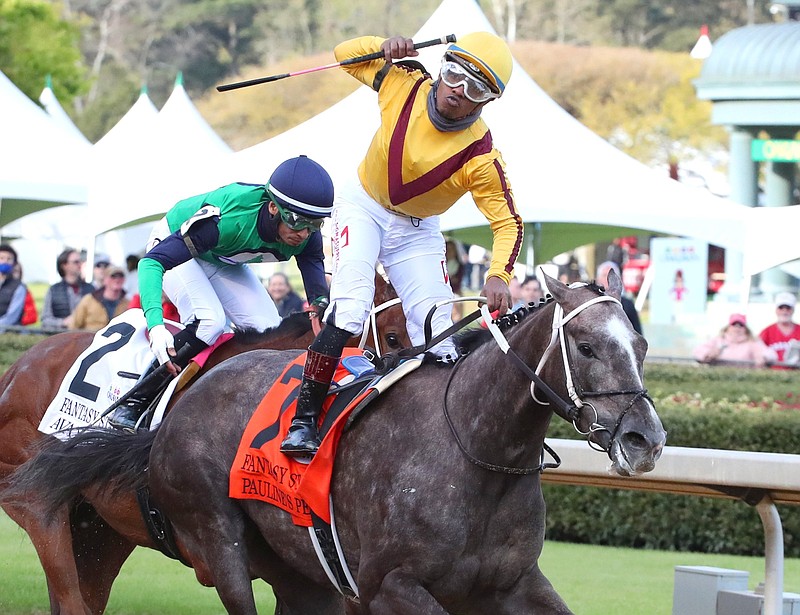 Jockey Ricardo Santana Jr. (right) celebrates as he crosses the finish line to win the Fantasy Stakes by 1 length aboard Pauline’s Pearl on Saturday at Oaklawn Racing Casino Resort in Hot Springs. Ava’s Grace, ridden by Ramon Vazquez, was second. (The Sentinel-Record/Richard Rasmussen)

HOT SPRINGS -- Pace helped, as did a barn full of celebrated connections on opening day of Oaklawn's Racing Festival of the South.

Ava's Grace led from the gate, but 4-5 favorite Pauline's Pearl had a head in front at the top the stretch and inched away from the persistence of the pace-setter to win the Grade III $600,000 Fantasy Stakes for 3-year-old fillies by 1 length. The 1 1/16-mile race was run in 1:43.64 before an estimated crowd of 5,000 at Oaklawn Racing Casino Resort on Saturday

Ava's Grace, off at 8-1 in the field of six, finished second, three-quarters a length in front of Coach in third. Take Charge Lorin finished fourth, 5 1/4 lengths behind the winner.

Sun Path, the 2-1 morning-line second-choice, awoke Saturday morning with a fever and was scratched.

"Ricardo used some of her away from there, made sure they were going along," Asmussen said. "We did not want to be a victim of what appeared on paper could be a paceless race. He said they were going good in front of her. He said she was carrying him beautifully, and he was very confident with where he was at."

With the win, Pauline's Pearl earned 100 of the 170 available Kentucky Oaks points to assure herself a place in the 14-stall Oaks starting gate at Churchill Downs in Louisville, Ky., on April 30.

Ava's Grace, ridden by Ramon Vazquez and trained by Robertino Diodoro, had never raced beyond 6 1/2 furlongs but showed her one-turn talent from the start. She led through the first quarter-mile in 23.11 and the half in 46.86.

The ease of her Honeybee lead, established with a first quarter-mile of 24.25, turned Will's Secret uncatchable in the stretch.

"The winner was able to go really, really slow," Sun Path jockey Joe Talamo said. "That was a pretty pedestrian pace that we were following. That didn't really help."

Will's Secret finished third in the six-filly Grade I Ashland Stakes at Keeneland on Saturday, and she has earned an Oaks start.

Ava's Grace offered speed to the Fantasy and also showed she has the potential to carry it through the wire of a graded-stakes route.

"She ran a great race," Vazquez said. "She had never run long before. She tried hard. She got a little bit tired. She's a nice filly."

After three-quarters passed in 1:11.84, Pauline's Pearl pulled in front. As Ava's Grace pushed her through the stretch, Coach -- trained by Brad Cox and ridden by Fernando De La Cruz -- passed Take Charge Lorin to move into third as they turned for home.

Santana rode four winners from Asmussen's barn to start the Festival, but none were more meaningful than Pauline's Pearl.

"We had a good trip," Santana said. "Everything worked out. She broke to run, settled down pretty well, and I thank God for the victory today. I think she has a great future."

Abrogate is trained by Asmussen and was ridden by Santana.

"She showed the quality she has under very good conditions," Asmussen said. "She's a very good filly, and we see good things in her future."

Joyful Cadence, trained by John Ortiz and ridden by David Cabrera, finished second, a half-length behind the winner and another half-length in front of third-place Windmill, the 4-5 favorite.