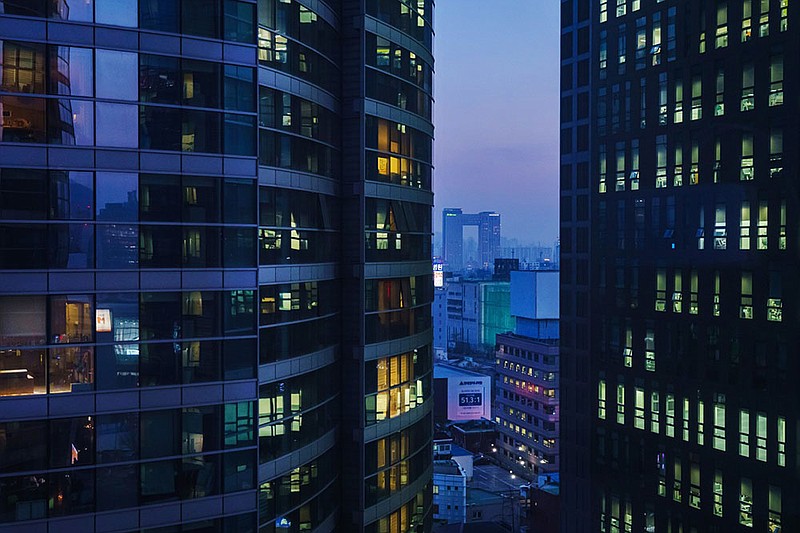 Apartment buildings in Seoul light up in the evening as people get home from work. The South Korean capital’s 10 million people are packed into a density that is 60% higher than New York City. (Los Angeles Times/TNS/Marcus Yam)

Before the rubber mallet, ear-splitting music, songs with obscene lyrics or the bass speaker affixed to his ceiling, Victor Park tried a gentle, neighborly request with a smile.

The family upstairs from his 11th-floor apartment had children who stomped above him well into the night. He asked if they could keep it down. But his repeated phone calls and pleas to apartment management went nowhere. He suffered heart palpitations and a perpetual sense of panic from the relentless pounding invading his home.

So he took matters into his own hands -- an eye for an eye, a tooth for a tooth, unbearable noise for unbearable noise. He thumped his ceiling with a rubber mallet, and the war between floors began.

"It's a pain that goes on 24 hours a day, a situation you can't escape," said Park, a 36-year-old delivery worker. "People don't change. They only come to their senses when you do the same to them."

The coronavirus pandemic kept people around the world in their homes for unprecedented stretches. In South Korea, where more than two-thirds of the population lives in apartment buildings, that has meant enduring noise thundering from someone else's feet. Even with lockdowns less extensive than in other countries, children and parents in South Korea worked and schooled at home for months. Shuttered gyms, cafes and senior centers offered no refuge, making life in the capital, Seoul, with 10 million people packed in at a density 60% higher than in New York City, feel even more crowded than usual.

That proximity has amplified a long-festering menace of urban living that in previous years has driven people so mad in South Korea that disputes over noise have led to stabbings, arson and in one case, a deliberate gas explosion.

Complaints to a government-run, inter-floor noise dispute resolution center soared by more than 60% in 2020 compared with the year before, according to the Korea Environment Corp. But the center has a monthslong backlog and neither its mediators nor the police can offer much recourse beyond measuring decibels and urging neighbors to be more considerate of one another.

When consideration fails, many sleep-deprived South Korean urban dwellers give their upstairs neighbors a creative earful of their own cacophony. Tapping a broom on the ceiling? Please. That's way too tame when one seeks "inter-floor noise revenge."

Unleashing a wall of sound against one's noisy neighbors is how loudspeakers designed to be installed on the ceiling are advertised online. YouTube has loops of "defense" sounds to blast on such speakers, including bouncing a golf ball at the ceiling, death metal, jackhammering and eight straight hours of drumming. On one internet forum dedicated to noise problems, with more than 58,000 members, tips are shared for revenge using massage guns to pummel the ceiling, slamming the door or playing ghost sounds through the vents.

"At the end of the day, noise is about emotions," said Lee Seung-tae, an attorney specializing in housing and urban issues. "Noise made by your loved ones wouldn't bother you."

Noises from her upstairs neighbors gave Lim Bo-mi so much anxiety that last summer she started putting in ear plugs every day at 10 p.m. and got a prescription for sleeping pills.

Her hours as a merchandizer for an interior design firm were cut during the pandemic, meaning she spent two extra hours a day in her studio apartment. She asked her landlord for help and repeatedly tried talking to her upstairs neighbor. Her pleas were ignored.

"They told me I was too sensitive, and they did nothing wrong," said Lim, 30. "They were so inconsiderate."

After eight months of bearing it, she bought a $2 rubber mallet and took to retaliating every time she heard loud noises. She's also discovered that setting her phone to vibrate and putting it against the wall quiets her neighbors. But the reprieve has been temporary, and she's now looking to break her lease and move elsewhere.

Yoo, a self-employed 40-year-old, also started out with a rubber mallet. When that only seemed to worsen the abuse from above, he escalated to a Bluetooth speaker in the bathroom vent, before buying a specialized woofer for revenge noise.

"At the end of the day, it's about the people," said Yoo, who declined to give his full name for fear of being fined for excessive retaliation. "They're only thinking of themselves, and they can't place themselves in your shoes. ... If they get a taste of it, they'll look back and how they've behaved."

Lee, the attorney, dissuades potential clients from taking disputes to court. Such cases are tough to prove and even if they're successful, the damages of a few hundred dollars are not enough to cover legal fees. He faced yearslong tensions with his upstairs neighbors, who had three children. He resolved the situation not through a lawsuit or revenge, but moving from the 13th floor to a 30th-floor penthouse a few buildings down.

"Your home needs to be a place of rest and comfort, but it becomes a source of stress," he said. "So many people tell me they end up feeling homicidal."

Seo Byeong-ryang, a manager at the noise dispute resolution center, said when engineers measure the noise at the complainant's home, it exceeds the legal threshold only about 7% of the time. Many people, once they learn more about their neighbor's life circumstances or patterns, become more understanding, he said.

That's what he tries to do when his upstairs neighbors seem to use their massage chairs at 11 p.m. or midnight -- thinking, they must've had a long, hard day at work -- or when they sound like they're pounding garlic at 7 a.m. -- they must be in a rush to get somewhere. He hopes his downstairs neighbors, who have cursed at his wife complaining about the noise his two sons make, afford him the same courtesy.

"I'm a perpetrator and I'm a victim," he said. "You can't help it in a communal living situation."

Park, the delivery worker, felt his neighbors deserved no such understanding. After years of tensions, he did away with the rubber mallet and bought a $150 revenge speaker that came with a spring-loaded pole to wedge it against the ceiling. He blasted music from a Dutch compilation called "This is Terror," and a song filled with dirty double-entendres that no mother would want her children hearing.

"It was war," he said. "I consider it justified self-defense."

For a month, he used the speaker only when his neighbors were being loud. When that didn't seem to abate the problem, he started leaving it on 24 hours a day. After a couple of months, the family moved out.

An online post about the type of speaker Park used noted the reviewer was suffering from a neighbor's dogs barking in the middle of the night. The reviewer found comfort in scrolling through the more than 2,000 reviews, half of which were posted since the pandemic.

"I realized there are so many others like me. The universality of the tragedy has been a consolation," the reviewer wrote. "It's saved me from the powerlessness of being unable to do anything."

Then came the warning to neighbors who brushed off complaints: "It's your turn now."