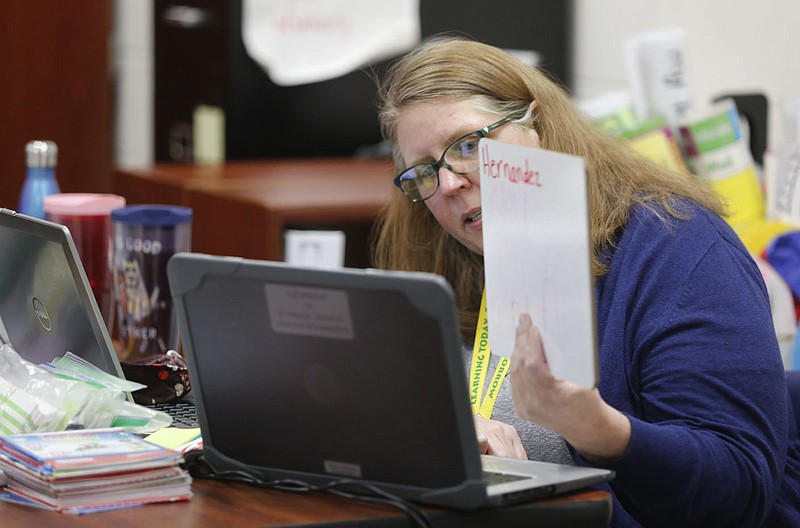 Mary Kate Wimberly, a tutor with the Migrant Education Program, works Wednesday, February 24, 2021, with on letters and the spelling of the last name of a kindergarten student through a video platform from her room at Monitor Elementary School in Springdale. Check out nwadg.com/photos for a photo gallery. (NWA Democrat-Gazette/David Gottschalk)

The Springdale School District serves more migrant students than any other district in Arkansas and is working to make sure their education isn't hindered by their parents' pursuit of employment, according to district staff members.

Tapia was once enrolled in the program as a migrant student as well. She moved from California to Springdale in 1996 when her parents came to the region in search of work, she said.

"They picked strawberries, they picked grapes, vegetables, you name it," she said.

Transitioning to a new region can be particularly hard for migrant students, Tapia said.

Mar Na, 18, is a senior at Springdale High who moved from Dallas to Springdale in 2019 when her father was hired to debone chicken at a local plant.

"It's challenging, because you find the path that you planned out perfectly is kind of disrupted," Na said of moving as a migrant student. She said she came to the United States from Thailand in 2009 and has moved from Houston to Dallas to Arkansas.

Program tutors have made a significant difference in helping her succeed in school and adjust to Northwest Arkansas, she said.

"When I first came here, I was a shy person and I didn't understand the English language at all," she said. "As time went by, I started to understand."

"When you're arriving at a new place, you kind of feel lost and distant from everyone else," she said. "You kind of need someone to talk to, someone to rely on."

The program supports the whole student and works to meet scholastic, social, emotional and personal needs, Galvez said. In addition to tutoring, program administrators ensure students have school supplies, food, health care and clothing so they can better succeed in school.

It's difficult for students to focus in class if their basic needs aren't met, Galvez said, adding many of the program's participants are low income.

"The migrant program is such a lifesaver," Tapia said. "Not only do they help with tutoring, it helps to connect them with resources in the community."

Springdale has the highest migrant student population in the state, followed by Berryville at 110, Fayetteville at 101 and Green Forest with 93, he said.

Most school districts in the state participate in the program, he said, noting Arkansas has about 5,700 migrant students overall. More than 215,000 students participated in the program nationally in 2018, according to the federal program.

"You migrate for work. An immigrant leaves their country to go to a new country to establish themselves," she said. "I feel like that's where we lose a lot of our families."

An element of fear sometimes exists for immigrant families who may not be U.S. citizens, she said.

"Regardless of their immigration status, they're still our student, so we're going to help them," Tapia said of eligible students.

"The hardest part is getting them identified. Then, services provided are outlined by the grant," she said.

School registrars and program recruiters work together to identify families who qualify for the program, Galvez said.

Many program participants face educational gaps that can hinder their performance in school, Wimberly said.

"I spend a lot of time playing catch up on skills they missed because they've been on the move," Wimberly said. "For some kids, I'm just trying to help them keep up, because maybe they're not even used to being in school and they have trouble managing time or getting work done or don't understand the basic skills."

Tutors met with youth one-on-one in schools and through home visits prior to the pandemic, but are limited to working with students virtually at this time, Wimberly said.

"It's hard not being right next to somebody helping them out," she said. "That is something new I've had to adapt to."

Helping students graduate from high school is also a significant aspect of the program, Warren said. The average graduation rate for Arkansas migrant students was 83% for the 2019-20 school year, he said. The overall rate of Arkansas public high school students graduating four years after entering ninth grade was 88.8% that year, according to the state.

The U.S. Department of Education estimates as many as 50% of migrant students fail to graduate high school.

Students qualify to participate in the program for three years, Galvez said. The participation time frame resets when students move to a new district, she said.

"We have families who are constantly re-qualifying because they do temporary work most of time," she said.

"Anybody who's ever been a migrant is eligible for the college scholarship," Wimberly said.

Na graduates this year and said she hopes to take advantage of program scholarships to begin her studies in biochemistry at Houston Community College and to enter the medical field. 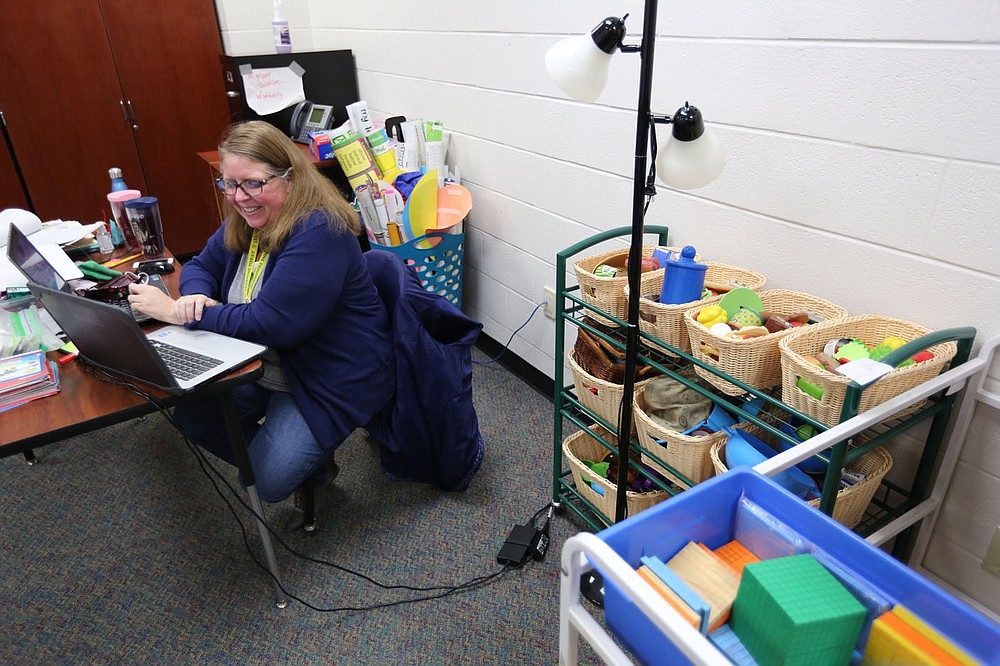 Mary Kate Wimberly, a tutor with the Migrant Education Program, works Wednesday, February 24, 2021, with on letters and the spelling of the last name of a kindergarten student through a video platform from her room at Monitor Elementary School in Springdale. Check out nwadg.com/photos for a photo gallery. (NWA Democrat-Gazette/David Gottschalk)
More News

Additional information on the Migrant Education Program is available online at https://results.ed.gov/about .