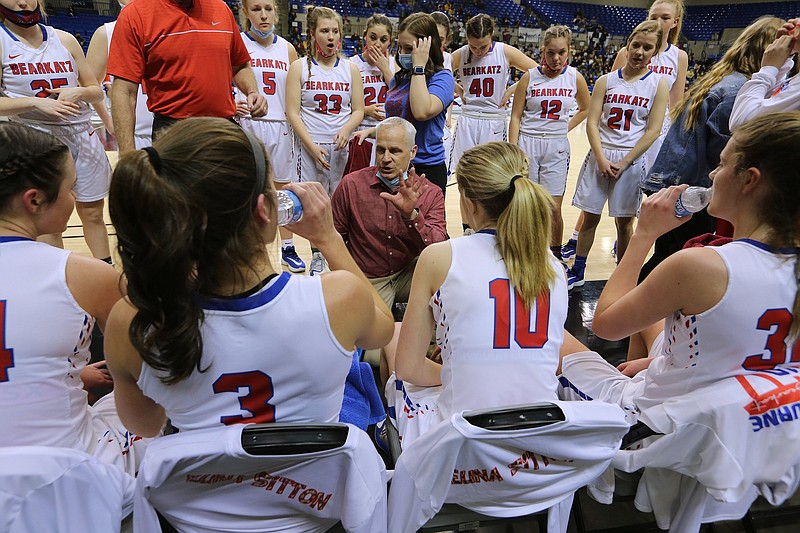 Eric Teague is 96-7 over the past three seasons at Melbourne, winning three Class 2A state titles. (Arkansas Democrat-Gazette/Thomas Metthe)

A little duress wasn't enough to stop Melbourne from completing the Class 2A three-peat so many figured the Lady Bearkatz would get.

That's not to say the Melbourne ship sailed smoothly from start to finish.

According to Coach Eric Teague, there were moments of distress that weighed heavily on his group, some of which sprang from home.

"Our community put a lot of pressure on us," Teague said. "The biggest things that they were saying was state tournament, state tournament or state championship. And it didn't seem like there was a lot of excitement for some of our games this year just because everyone expected us to win and win by a lot.

"Now none of that was done intentionally or on purpose or anything like that because when you've had some success, those kinds of expectations come. It was probably a little unfair to the kids, but you have to go through a little pressure, little stuff to reach your goals most of the time."

Melbourne lived up to the expectations under the leadership of Teague, who earned the Arkansas Democrat-Gazette All-Arkansas Girls Basketball Coach of the Year.

In his seventh season as coach, Teague guided his team to a 32-1 record while playing a tough schedule for a Class 2A team. The Lady Bearkatz won their final 31 games, beat 13 teams that reached their respective state tournaments and knocked off the eventual champions from Arkansas' two highest classifications -- Fort Smith Northside and Jonesboro. Of Melbourne's 32 victories, only seven were by six points or less.

Teague said there were times when the team didn't always see eye to eye, which may have caused its level of play to dip during some games.

"Talking about the pressure and then with teenage girls, there was a little confliction between our younger kids and older kids after one of our games," he said. "Everybody says an ugly win is still a win. But for us, it wasn't a good win. It's probably strange for people to say, but there are some wins that just aren't good wins. And for me, I challenged them really, really hard after that win."

The game Teague alluded to was against the team Melbourne faced more than any other this season -- Salem. On Jan. 28, the Lady Bearkatz had to fight for a 47-42 home victory, which effectively wrapped up the 2A-2 Conference title.

"It just wasn't a good game for us," he said. "We weren't sharing the ball, either, and our offense wasn't flowing very well. Our older kids just said that it was time to step up, show our maturity, listen to our coach and trust each other while having fun.

"That's when I think things turned around a bit for us. We started averaging 12-13 assists, even had a game where we had 19 assists. When I saw that turnaround in them, especially on offense, and the maturity of our older kids, I knew we were probably going to be in pretty good shape."

After that victory over Salem, Melbourne won its final 14 games by an average of 30.3 points per game. The Lady Bearkatz capped off the year by beating Salem 55-34 to notch their third state championship in a row.

Melbourne should be in good shape next season, which will almost certainly bring an additional set of expectations. The Lady Bearkatz will lose a handful of seniors, namely title-game starters Josie Roark and Kylee Humphries, and Williams Baptist signee Kiley Webb, who was forced to sit out the final game because of an injury. Teague will have second-team All-Arkansas Preps performer and University of Arkansas commitment Jenna Lawrence back, as well as Tennessee-Martin pledge Kenley McCarn.

"We should be pretty solid," Teague said. "But I have to say that this year was a special year. It just seemed like with covid and everything, with all the expectations, it was almost overwhelming.

"It was a strange season, and everybody was taken out of their comfort zone. But these kids got through it all. Every challenge that was thrown at them, they were able to overcome it."

Teague at a glance

NOTEWORTHY Has gone 96-7 in his past three seasons. … Captured the past three state championships at Melbourne (the school has won four overall). … Won at least 27 games in each of the past four seasons with the Lady ’Katz.