Described as a Renaissance woman, Joanna Seibert set her sights on pediatrics; a car crash and alcoholism altered her path and brought her closer to God by Rachel O'Neal | April 4, 2021 at 8:38 a.m. 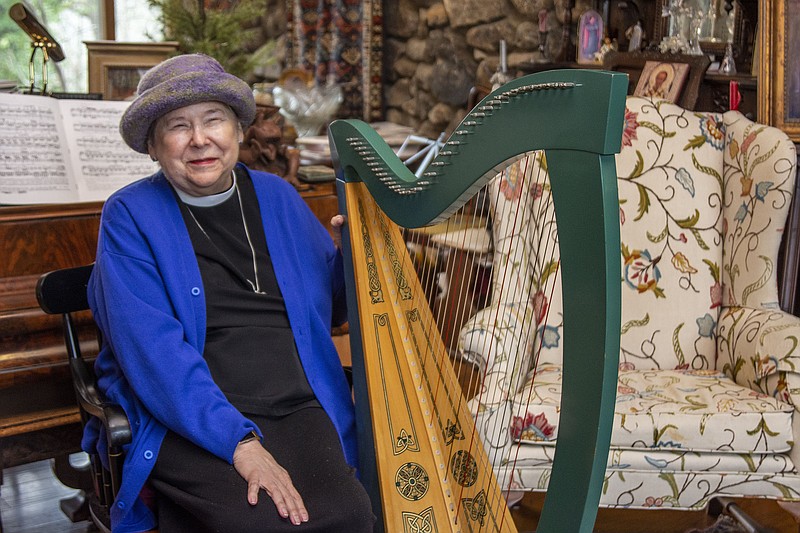 Joanna Seibert on 03/05/2021 a her home for High Profile Cover.(Arkansas Democrat-Gazette/Cary Jenkins)

After spending decades healing the body, Joanna Seibert turned her attention to healing the soul.

Moving to Arkansas in 1976, Seibert became the first trained pediatric radiologist in the state. Before that, she was the first woman on the faculty at the University of Iowa. In 2001, she became an ordained deacon in the Episcopal Church and has served four congregations.

"I would see patients and their parents and I wanted to do something more than just heal them physically," Seibert says. "I wanted to have the chance to heal them spiritually and mostly just to let them know that God loves them."

Even though she retired from medicine in 2015, her work as a physician continues to be honored. In April 2022 in Denver, she is scheduled to receive the Gold Medal from the Society for Pediatric Radiology, the organization's most prestigious honor. The award ceremony was originally scheduled for October in Rome but was delayed because of covid-19.

Her journey toward becoming a healer of body and soul has had many twists. She went through a divorce, was involved in a horrendous car crash and suffered from alcohol abuse. But each challenge led her to the path she is on now.

Seibert grew up in West Point, Va., a small town about 40 miles east of Richmond. From her house, she could gaze across the York River and see the land where one of her grandfathers farmed.

Her father, Bud Johnson, was a forester who eventually became a lobbyist for the pulp and paper industry. Her mother, Florence, was a homemaker, raising Seibert and her younger brother, Jim. Seibert's maternal grandparents -- Annie and Joe Whaley -- lived a block away and played a big role in her life. Her name is a combination of their names.

"The thing about being a grandparent is you can give unconditional love and that is what they did," she says. "They loved me no matter what I did. They just loved being with me and they made me feel like I was loved and I was loved by God."

"I tell people I was kind of a Metho-Baptist," she chuckles.

She married her boyfriend between her junior and senior year of college. Her husband wanted to go to optometry school and the couple moved to Memphis.

"I'd always planned to become a medical technologist. I didn't even think about becoming a doctor. Women just didn't do that," she says. "I worked as a medical technologist between my junior and senior year in college and I realized I have all the education that pre-med doctors do, but I'll just be running the tests and they'll be the ones taking care of the patients."

She applied and was accepted at the University of Tennessee College of Medicine. She was one of eight women in the class.

A few years into medical school, Seibert's marriage ended in divorce. Then came the accident. As a busy med student, her biggest indulgence was having her hair styled on Friday afternoons. One day, she was leaving the salon in her red Volkswagen Beetle when a drunken driver in a Cadillac slammed into her.

Both of her ankles were fractured and a knee and her back were injured. She still walks with a cane and sometimes a walker.

"I had to sit out of school for six months. They weren't even sure that I was going to walk again; it was that serious of an accident," she says. When she was able to return, she met her second husband, Robert Seibert.

"I would not have met him if it hadn't been for that accident. I am still suffering from some of these injuries -- some of the consequences of them. But I never regret it."

Six months behind, Seibert found herself the only female in that class. She planned to become a pediatrician, but after the wreck she realized she needed to change course, because she couldn't walk for long periods of time. She spent some time in radiology and set her sights on becoming a pediatric radiologist.

Joanna and Robert met while working in the night obstetrics department. She says the hours were filled with "long stretches of nothing to do and seconds of extreme terror." The couple had plenty of time to talk. They married after both completed their medical internships. At that time, all male physicians were required to enter the military under the Berry Plan. Their first child, also named Robert, was born while Joanna's husband was in Vietnam.

After her son was born, Seibert started her residency in radiology. In 1972, the Seiberts moved to Iowa and he was accepted into the University of Iowa's ear, nose and throat program while she finished her pediatric radiology training and accepted a position as head of the pediatric radiology department.

Both of the Seiberts were recruited by Arkansas Children's Hospital and decided to move their growing family to the Natural State in 1976. Her in-laws lived in Memphis and were available to help with their three children -- sons Robert and John, and daughter Joanna, who inherited her mother's name.

"This was when Arkansas Children's Hospital was becoming a pediatric hospital. Before, it had just been a hospital for polio victims and children with disabilities," Seibert says. "It was exciting to be right on the ground floor of a developing children's hospital."

During her almost 40-year career at Children's Hospital, Seibert pioneered research on the utilization of Doppler sonography to evaluate cerebral blood flow in children with sickle cell anemia to predict the risk of stroke.

She is also the author of more than 100 peer-reviewed papers on pediatric radiology, several textbooks and numerous scientific book chapters. Every other year, Children's Hospital gives the Joanna and Robert Seibert Award to a physician who embodies the teamwork of his or her practice.

"Dr. Joanna Seibert is one of those giants in medicine who broke the glass ceiling here in Arkansas. As the state's first pediatric radiologist, she led with a quiet compassion, rooted in her deeply held spirituality. She is a Renaissance woman of thought, work, art, spirituality and life. We are fortunate to have the opportunity to follow her example," says Marcy Doderer, president and chief executive officer of Arkansas Children's Hospital.

But the pressure of working 10- to 12-hour days got to Seibert. Once she returned home, she found herself drinking two glasses of wine before dinner, two glasses with dinner and two glasses after dinner.

"For the years that I was drinking, I was not as present to my family and to my husband," she says. "Then I would start all over the next day. That was kind of my life for a while."

She has been in recovery for 30 years. Part of the process is making amends to people who were affected.

"A big part of my amends were to my children, and I was at lunch with my middle son John and I said 'I am so sorry I wasn't there for you for several years and this is what is on my mind all of the time.' His answer was 'Mom, it's never too late to change.'"

John followed in his parent's footsteps and is an ear, nose and throat doctor in Tennessee. Robert is an archivist at the Clinton Presidential Center and lives across the street from his parents; and daughter Joanna is a teacher and writer who lives near Petit Jean Mountain.

Part of Seibert's ministry through the Episcopal Church is helping people in alcohol and substance abuse recovery. "I do think it is important to let people know that the church really cares about them and it is not a moral failure. It is a disease."

Both Seibert and her husband became Episcopalians when they were in medical school. Both were young divorcees and she was the only person in her family who had been divorced. "There's something about that that makes you feel like there is something wrong with you," she says. The dean of the Episcopal Church in Memphis where they attended offered the spiritual guidance she was looking for.

In Little Rock, the Seiberts joined St. Mark's Episcopal Church and became very involved. In the early 1990s, they helped establish St. Margaret's Episcopal Church. Around that time, Seibert overheard a friend talking about a school for deacons. "And [all] of a sudden I thought, 'That's for me; that's what I want to do.'" She was ordained in 2001.

The Rev. Danny Schieffler, rector of St. Mark's Episcopal Church, says Seibert is a "true Renaissance woman, but you would never know it. She just lives it."

"Part of her strength and power in her ministry is because she is open about her vulnerabilities and struggles and she is very relatable when she is teaching and preaching," he says. "You know it is coming from her heart."

Now she is contemplating writing a book based on letters she received from her grandfather, Joe Whaley. He wrote to her once or twice a week when she was in college and med school.

Seibert says she knew her grandfather did not approve of her smoking. His mother had died of tuberculous when he was 4. She had her last cigarette on Dec. 7, 1979, the day of his funeral.

She's now transcribing his typed letters into a digital format and is pondering how she can honor him with a book.

She kept them all these years because "that's how much he meant to me." She added he was "the person who taught me the most about unconditional love."

When Seibert's daughter, Joanna, was in elementary school, she saw a TV commercial featuring a person playing the harp and wanted to learn to play one. After a year of talking about it, the Seiberts rented a harp and Seibert and her daughter started taking lessons. Daughter Joanna did not keep up with the lessons, but Seibert did.

She still tries to play the harp each day.

"You put the harp right up against your body and so you can feel the music in your body," she says. "It's another way of feeling the music."

The Rev. Henry Hudson, former dean of Trinity Episcopal Cathedral, says Seibert is "one of the stars of my life. She has meant so much to me for so many years and [so much] to the church and to the community."

Hudson says Seibert's voice is "incredibly soft. It's musical." When she preaches, the congregation must listen closely to hear what she is saying. When she visits the sick, her gentle spirit puts the family "immediately at ease," he says.

Seibert likes to arrive at church before the 7:30 a.m. services and play her harp -- something that long-term members initially didn't think was a good idea. But their minds were quickly changed, he says.

"It's so magical and wonderful and it really brought the whole congregation together and set the tone for the service," Hudson says.

When asked how she prefers to be addressed -- doctor or deacon -- Seibert is quick to respond "please just call me Joanna."

"I try not to be something that I am not. I try to be the person God created. I've had so many amazing things happen in my life. My husband and I have been married for 52 years this year. It's been an amazing marriage. I don't deserve it, but I'll take it."