Tigers’ operator a smooth one 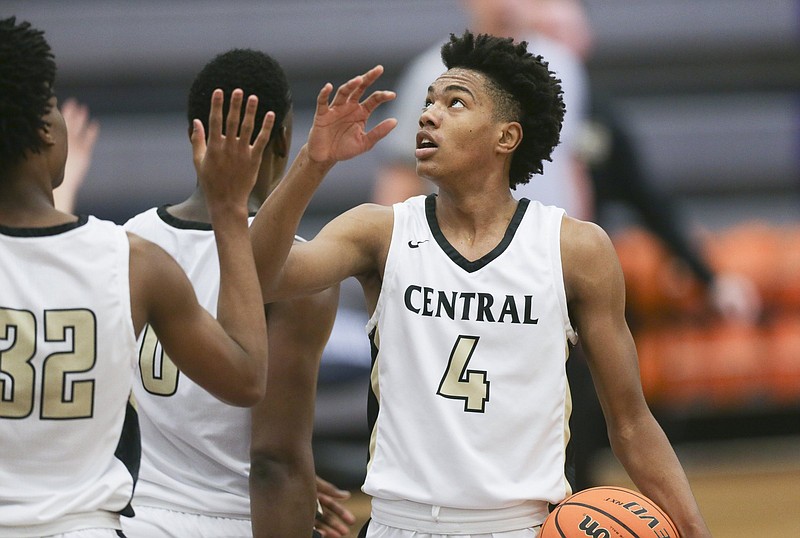 During the fourth quarter of a late-season home game against Bryant, a small contingent of Little Rock Central supporters sitting in the top left corner of an unreserved section of Boone-Fitzpatrick Fieldhouse began singing “Smooth Operator” — a mid-1980s hit by songstress Sade — after Bryson Warren nailed an 8-footer that all but locked up a 56-43 Tigers’ victory.

What was apparent to those fans at that moment is the same thing that’s been obvious to many of the teams that the sophomore this season.

“He’s about as smooth as they come,” North Little Rock Coach Johnny Rice said when describing Warren’s play two days before his Charging Wildcats played the Tigers for the Class 6A title. “He can handle the ball or shoot it off the dribble, can change directions. He can make it look easy at times.” It was the simplistic way Warren operated that helped make Central a Class 6A powerhouse. It’s also one of the reasons he was selected the Arkansas Democrat-Gazette All-Arkansas Preps Boys Underclassman of the Year.

The 6-2 guard averaged 26.5 points, 4 assists and 3 steals per game in leading the Tigers to one of their best seasons in recent memory. Central finished 23-5, which was its best record since going 24-5 in 2008, and won a conference championship for the first time in 14 years. The Tigers also clinched a berth in the state championship game for the second year in a row, a first for the school since 2001-02.

The likelihood of Central having a stout season was high from the start, especially with three starters back from a team that was crowned co-champion in 2019-20. But Coach Brian Ross had an influx of talent transfer in during the offseason, including Warren. So figuring out a way to get his returners to mesh with Warren, former Baptist Prep stud Hudson Likens and freshman forward Annor Boateng was somewhat of a chore.

“It was everybody on the team trying to figure out how to play with each other,” Ross said. “[Warren], the returning guys, Hudson and Annor playing big roles. It was literally like a whole new team almost, so it was about finding that chemistry on the court.

“It probably took longer than normal because we didn’t have a team camp last summer, and our practices weren’t even normal until early September. But once it started clicking, it really clicked.” Ross said the team’s growth was evident after a quarter of the season had passed, particularly Warren’s ascension. He went from being a shooter who could consistently get to the basket to being a facilitator and running the team at times.

Warren scored 32 points in his first game with the Tigers to lead them to a 67-62 victory over Jacksonville. He continued to have impressive showings throughout the nonconference schedule, scoring 36 points in a victory over Bentonville West on Dec. 29 and 29 points against Hot Springs less than 24 hours later.

He was especially good in 6A-Central action. He averaged 29 points in two conference battles against North Little Rock, and 23 points in two victories over Bryant. Central’s 13-1 league mark was its best since 1999. The Tigers also had a stretch where they went 18-1 before losing to the Charging Wildcats for the state championship.

“That would’ve been the icing on the cake if we had won,” Warren said. “But I had to learn how to just keep playing when teams started sending traps and triple teams. Playing against box-and-ones and knowing when and how to get open, those situations helped me a lot. I know I’ve still got a lot to work on, and that’s what I’m going to be doing a lot of this summer.

“Just work on every aspect of my game. I know I’ve got to get quicker, faster, stronger because I know I’m going to see those triple and double teams next year.” Ross isn’t too concerned with what Warren will be doing over the next five months. He’s got a pretty good idea already.

“We were sitting the other day talking about next season, and I told the guys that our most improved player will probably be Bryson,” Ross said. “He’s got all of that talent, but he’s going to keep working harder than anyone else. His work ethic is as good as any player I’ve ever coached, and I’ve coached a lot of hard-working guys.

“His demeanor is so calm, too. I couldn’t tell you how many times I went into the locker room, looked at the stats and then asked my assistants, ‘Did he really have 21 points?’ He’s so smooth with it that you don’t notice that he’s doing what he’s doing sometimes until you realize he’s hit eight shots in a row.”

Warren at a glance

NOTEWORTHY Shot 58% from the field, including 48% from beyond the three-point line. ... Was named the 6A-Central Conference Player of the Year. ... Selected to the All-Arkansas Preps Underclassman team as a freshman. ... Ranked as the No. 11 point guard for the Class of 2023 by ESPN. ... Holds scholarship offers from schools including Arkansas, Georgetown, Oklahoma State and Texas A&M.