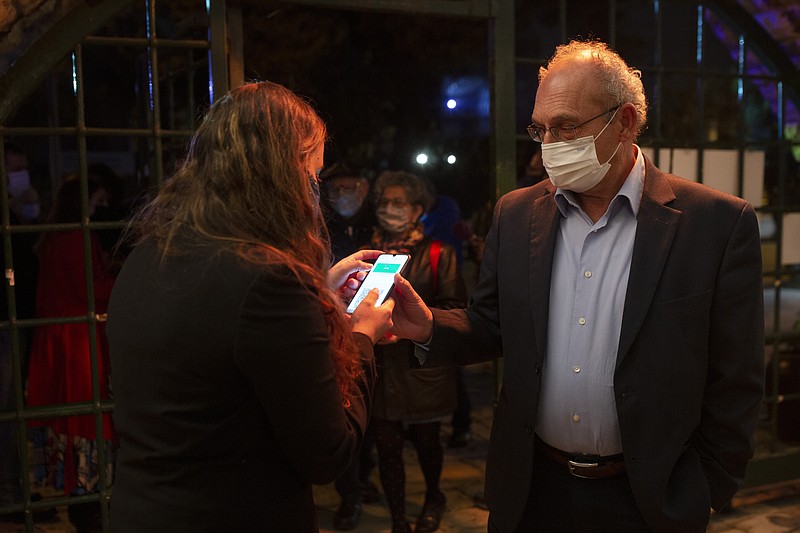 FILE - In this Tuesday, Feb. 23, 2021, file photo, a man presents his "green passport," proof that he is vaccinated against the coronavirus, on opening night at the Khan Theater for a performance where all guests were required to show proof of vaccination or full recovery from the virus, in Jerusalem. Vaccine passports are being developed in the U.S. to verify COVID-19 immunization status and allow inoculated people to more freely travel, shop and dine. (AP Photo/Maya Alleruzzo, File)

They currently exist only in New York, but GOP lawmakers in a handful of states have put out legislative proposals to ban their use.

The argument over whether passports are a sensible response to the pandemic or represent governmental overreach echoes the disputes over the past year about masks, shutdown orders and the vaccines.

Vaccine passports are typically handled through an app with a code that verifies whether someone has been vaccinated or recently tested negative for the virus. They are in use in Israel and under development in parts of Europe, as they are seen as a way to safely help rebuild the pandemic-devastated travel industry.

They are intended to allow businesses to more safely open as the vaccine drive gains momentum, and they mirror measures already in place for schools and overseas travel that require proof of immunization against various diseases.

But lawmakers around the country are taking a stand against the idea. GOP senators in Pennsylvania are drawing up legislation that would prohibit vaccine passports, also known as health certificates or travel passes, from being used to bar people from routine activities.

"We have constitutional rights and health privacy laws for a reason," said Pennsylvania House Majority Leader Kerry Benninghoff, a Republican. "They should not cease to exist in a time of crisis. These passports may start with covid-19, but where will they end?"

Benninghoff said last week that his concern was "using taxpayer money to generate a system that will now be, possibly, in the hands of mega-tech organizations who've already had problems with getting hacked and security issues."

A Democratic colleague, Rep. Chris Rabb, said he sees value in vaccine passports if they are implemented carefully.

"There's a role for using technology and other means to confirm people's statuses," Rabb said. "But we do have concerns around privacy, surveillance and inequitable access."

Republican legislators in other states have been drafting proposals to ban or limit vaccine passports. A bill introduced in the Arkansas Legislature on Wednesday would prevent government officials from requiring vaccine passports for any reason and would ban their use as a condition of "entry, travel, education, employment or services."

However, President Joe Biden's administration has largely taken a hands-off approach toward passports.

At a news conference last week, Andy Slavitt, acting administrator of the Centers for Medicare and Medicaid Services, said he considered them a project for the private sector, not the government.

He said the government is considering federal guidelines to steer the process surrounding vaccine passports. Among its concerns: that not everyone who would need a passport has a smartphone; that passports should be free and in multiple languages; and that private health information must be protected.

Anderson noted the Vaccination Credential Initiative is not making recommendations on how -- or even if -- organizations choose to use the certifications.

In Montana, GOP lawmakers last week voted along party lines to advance a pair of bills that would ban discrimination based on vaccine status or possession of an immunity passport, and to prohibit using vaccine status or passports to obtain certain benefits and services.

A freshman Republican state lawmaker in Ohio spoke out about the concept, saying more restrictions or mandates are not the answer to every covid-19 problem.

"Ohioans are encouraged to take the covid-19 vaccine for the health and well-being of themselves and others," Rep. Al Cutrona said. "However, a vaccine should not be mandated or required by our government for our people to integrate back to a sense of normalcy."

Florida Gov. Ron DeSantis, a Republican, on Friday issued an executive order that said no governmental entity can issue a vaccine passport, and businesses in that state can't require them. He said he expected the Legislature to pass a similar law.

His order said that requiring "so-called COVID-19 vaccine passports for taking part in everyday life -- such as attending a sporting event, patronizing a restaurant, or going to a movie theater -- would create two classes of citizens."

U.S. Rep. Marjorie Taylor Greene, R-Georgia, who has embraced and promoted a variety of far-right political positions, told her supporters on Facebook last week that "something called a vaccine passport" was a form of "corporate communism" and part of a Democratic effort to control people's lives.

And a GOP lawmaker in Louisiana has teed up a bill intended to keep the state from including any vaccination information on the state driver's license or to make issuance of a license subject to vaccine status.

In New York, a government-sponsored vaccine passport called the Excelsior Pass is being introduced. A smartphone app, it shows whether someone has been vaccinated or recently tested negative.

Democratic Gov. Andrew Cuomo touted the idea as letting an event-venue usher, for example, use a smartphone to scan a concertgoer's code.

New York officials have not released details about how the app will work, access someone's vaccination or testing status or protect a user's name, date of birth or the location where the person's code was scanned. The app's privacy policy says data will be "maintained in a secure manner" and won't be used for sales or marketing purposes or shared with a third party. But some privacy experts say the public needs more specifics to ensure that information is protected.

Albert Fox Cahn, founder and executive director of the Surveillance Technology Oversight Project at the Urban Justice Center, a New York-based civil-rights and privacy group, warned that the app creates a new layer of surveillance without sufficient details about how it collects data or protects privacy.

"We basically only have screenshots of the user interface and not much more," Cahn said of Excelsior Pass.

In Germany, the president said the country is enduring a "crisis of trust" and urged people to "pull together" as they weather a second Easter amid pandemic restrictions and dissatisfaction over the government's response.

In an address broadcast Saturday, Frank-Walter Steinmeier conceded that "there were mistakes" regarding testing, digital solutions and vaccinations.

"Trust -- in a democracy it rests on a very fragile understanding between citizens and the state. 'You, state, do your part; I, citizen, do mine,'" he said. "I know that you, the citizens, are doing your part in this historic crisis. You have done much, and you have gone without much."

"Your expectation for those in government is, 'Get it together.'"

Steinmeier said the country had swung from self-satisfaction over lower infection numbers in the early stage of the pandemic to excessive pessimism today.

He urged Germans to "pull together" and put aside "constant indignation over others or over people in high places." He said that vaccine deliveries will increase sharply in the coming weeks, that Europe is building up its production capacities and that general practitioners will join the vaccination effort in addition to large vaccine centers.

"The truth is, we're not world champion, but we're not a failure either," he said.

Germany, along with the European Union as a whole, has lagged behind the U.S. and the U.K. in the speed of its vaccination effort amid slower procurement of vaccines and complaints about excessive bureaucracy and paperwork.

Britain's medicines regulator, meanwhile, is urging people to continue receiving the AstraZeneca vaccine despite revealing that seven people in the U.K. have died from blood clots after getting the shots.

The Medicines and Healthcare Regulatory Agency said it wasn't clear whether the shots are causing the clots, adding that its "rigorous review into the U.K. reports of rare and specific types of blood clots is ongoing."

Though the agency said late Friday that seven people had died as a result of blood clots, it didn't disclose any information about their ages or health conditions.

In total, the agency said it had identified 30 cases of rare blood-clot events out of 18.1 million AstraZeneca doses administered through March 24. The risk associated with this type of blood clot is "very small," it added.

"The benefits of covid-19 vaccine AstraZeneca in preventing covid-19 infection and its complications continue to outweigh any risks, and the public should continue to get their vaccine when invited to do so," said Dr. June Raine, the agency's chief executive.

Concerns over the AstraZeneca vaccine have prompted some countries -- including Canada, France, Germany and the Netherlands -- to restrict its use to older people.

The U.K. is particularly reliant on the AstraZeneca vaccine, which was developed by scientists at the University of Oxford.

Figures on Saturday showed that the U.K. had given a first dose of vaccine to 31.4 million people, or around 46% of its population, a much higher rate than the rest of Europe.

In Canada, several provinces are imposing new restrictions on social gatherings and businesses in a bid to blunt a resurgence of the coronavirus that is hitting more young people with severe illness than before and is straining some health care systems.

Infectious-disease experts say the resurgence is being fueled in part by pandemic fatigue, the premature easing of restrictions and the spread of more transmissible and dangerous variants, particularly the B.1.1.7 variant first identified in Britain. They say a bumpy vaccine rollout is not helping.

"We're very concerned with the variants becoming an increasing proportion of cases," Howard Njoo, Canada's deputy chief public health officer, said Thursday, imploring Canadians not to gather in person with those who live in other households.

Coronavirus cases and hospitalizations had fallen sharply and plateaued after peaking in January, but the trend has reversed, even as vaccinations roll out. The number of variant cases in the country Wednesday was 70% higher than the previous week. British Columbia recorded its highest number of daily cases last week. Ontario has never had more coronavirus patients in intensive care.

Across the country, public health officials and infectious-disease experts are reporting that the patients who are hospitalized with more severe illness are younger than during previous surges. Generally, they are under 60.

"As the new variants spread, you will see that covid-19 is killing faster and younger," Adalsteinn Brown, co-chairman of a panel of scientists advising Ontario Premier Doug Ford, said Thursday as he unveiled new modeling for the province. "It's spreading far more quickly than it was before, and we cannot vaccinate quickly enough to break this third wave."

Alyson Kelvin, a virologist at the University of Saskatchewan's Vaccine Infectious Disease Organization, said the young could be replacing the old in hospitals because many of the elderly who once were the most vulnerable have been vaccinated, because the young are essential workers and because the variants are causing more severe illness.

"The variants are playing by different rules," she said. 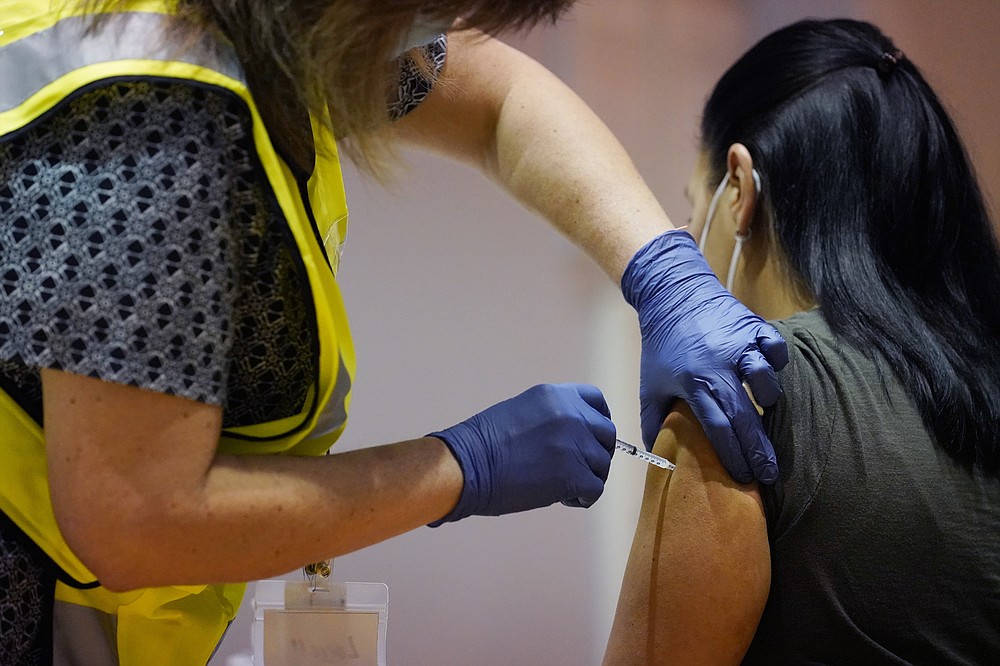 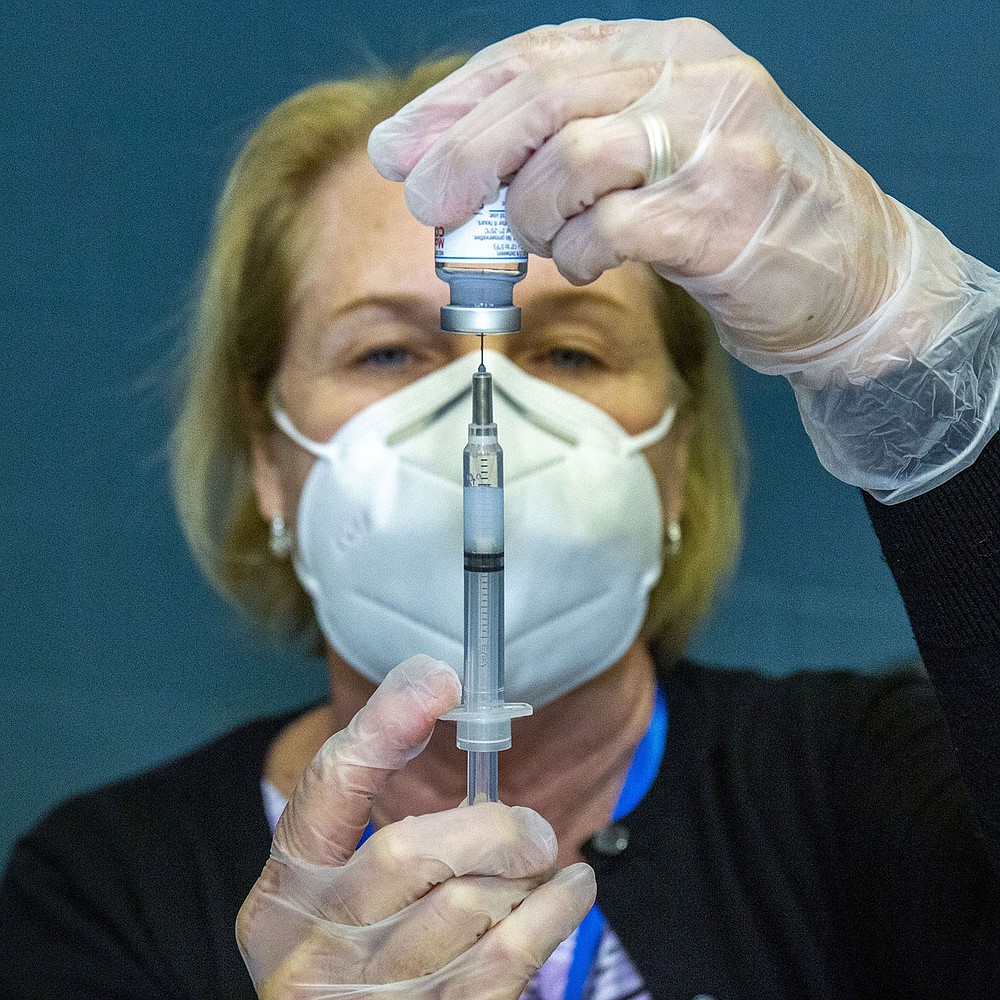 Gail Henschke fills a syringe with the Moderna covid-19 vaccine Saturday as people line up for shots at a LeSean McCoy Foundation- hosted vaccination clinic in the Camp Curtin YMCA in Harrisburg, Pa. More photos at arkansasonline.com/44covid19/. (AP/The Patriot-News/Mark Pynes) 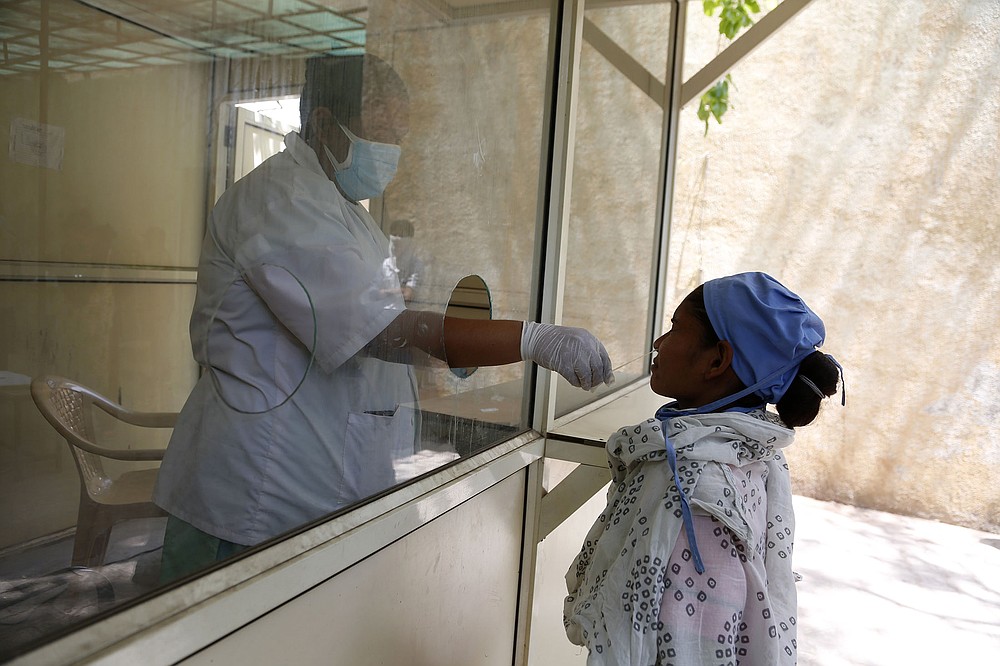 A health worker takes a swab sample to test for the coronavirus Saturday outside a shopping mall in Mumbai, India. (AP/Rajanish Kakade) 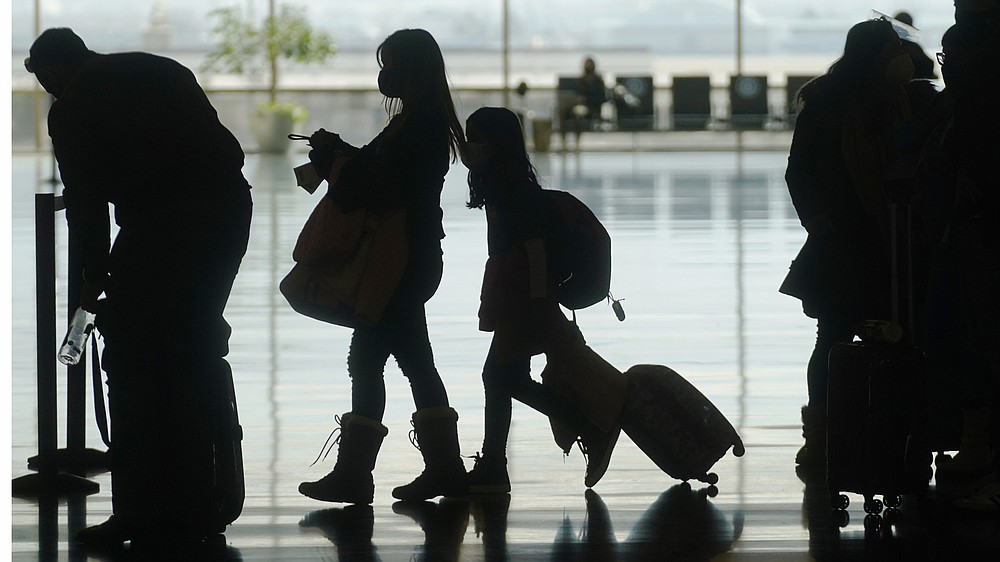 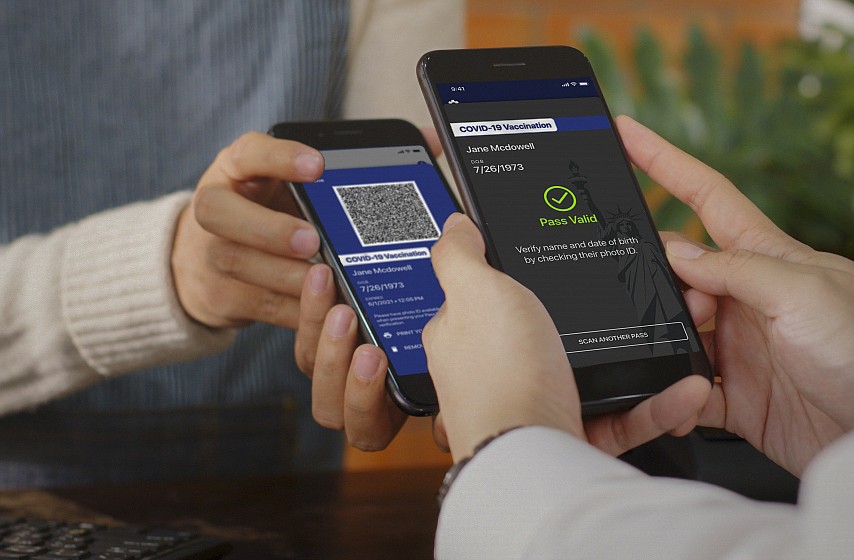 FILE - In this undated photo, provided by NY Governor's Press Office on Saturday March 27, 2021, is the new "Excelsior Pass" app, a digital pass that people can download to show proof of vaccination or a negative COVID-19 test. Vaccine passports being developed to verify COVID-19 immunization status and allow inoculated people to more freely travel, shop and dine have become the latest flash point in America’s perpetual political wars, with Republicans portraying them as a heavy-handed intrusion into personal freedom and private health choices. (NY Governor's Press Office via AP, File)
ADVERTISEMENT