We want our friends back! (but which ones?) 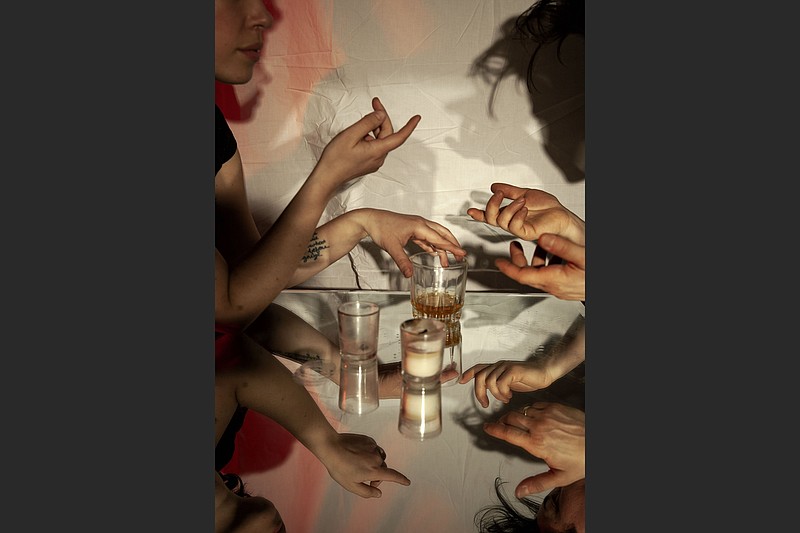 Friends talk over drinks in Brooklyn on March 19. How much do you miss the friends you hung out with, pre-pandemic? It depends on the friends, obviously. (The New York Times/Jeanette Spicer)

It's not like 2020 was a year without friends. We raised a toast on Zoom birthday parties, organized trivia nights on Google Meet and spent more time than ever waiting in lines, a great place to make new friends.

I mean, I made one, even. His name is Josh, and he is a writer who lives in my neighborhood. For years he remained at that cool-guy-I-should-definitely-get-to-know-better status. Life gets in the way.

Life changed last March. With our families thrown together into a pod, Josh became a lifeline to sanity as other friends disappeared. We grilled burgers in 35-degree weather and fretted about politics while our children played hide-and-seek. Crisis created a closeness.

But spending all that time with Josh also made me realize how much the rest of my social life had winnowed. Many friends vanished into pods of their own. Our mutual friend, Jay, who introduced me to Josh, was home in Connecticut for the duration. I still have the gift-wrapped bottle of whiskey I bought for his 40th birthday, in February 2020.

My friends in Los Angeles? Well, they stayed in Los Angeles. My college friends? Our last group hang was March 11, 2020, a steak dinner in Tribeca. We got word that the NBA pulled the plug on the season while we were enjoying our oysters.

Gone was the Tuesday poker night we were trying to get off the ground (someone still owes me $14). Gone were the dinner parties with the couples we saw quarterly. Gone were seemingly half the parent friends from our sons' schools.

Doesn't everyone have stories like that? For many of us the pandemic was a great social winnowing, a paring down of our widest circles of friends to a skeleton crew of essentials — those who happened to be proximate, available and in our circle of trust.

Everyone else? Well, they were all on hold until "all this is over," to cite a tired phrase. With Americans receiving more than 2 million vaccine doses daily, that day could be nearing. The common assumption is that we are counting the minutes until we get back out there, to hurtle into jubilant mobs like Carnival revelers. The high-decibel house parties. The sweaty dance floors. Elbowing for drinks in a packed-to-the-rafters-bar. In short: people!

And for many, that is unquestionably true. Maybe not everybody. A year is a long time. People aged, people moved. People got married, people got divorced. People changed, people died. Along the way, the social webs that connected us were stretched to the limit.

"Everyone has changed the way they interact," said Rebecca G. Adams, a professor of sociology and gerontology at the University of North Carolina at Greensboro who studies peer networks. Over the past year, she said, we stopped exploring, often limiting our rare encounters to tiny groups of trusted intimates. We didn't get new ones.

"If you can't go out to public places," Adams said, "you're not picking up new casual friends, and the casual friends you already have are just going to drift off your radar. We don't know what the lasting effect of these social disruptions will be."

We're about to find out. It's only reasonable to wonder if we will be able to revive all those friendships that spent a year on hold — and if we even want to.

Think back to the fantastical Neverland of 2019. Think of the parties you went to, the picnics, the club nights. Where are all of those people now? How much do you miss them?

Friends generally fall into tiers, like those old food-pyramid posters in the school cafeteria, except in this case, the tiny triangle at the pinnacle is where the good stuff is — your best friends who provide the most nourishment. The broad base of the pyramid represents the acquaintances, the kinda-friends, the friends of friends and amiable whoevers that, like cupcakes or pigs in a blanket, are great to sample at a party, but do not make a full meal.

Such loose acquaintances can be categorized as "weak tie" relationships, to summon a term coined by the Stanford University sociologist Mark Granovetter in the 1970s, as Amanda Mull wrote in The Atlantic in January. They were also the first to go during the pandemic, as shops, restaurants and offices closed.

Mull eulogized these almost-friends who were suddenly absent from her life: "the guy who's always at the gym at the same time as you; the barista who starts making your usual order while you're still at the back of the line."

While these people may not make it onto your phone, they matter in sum, Adams said. She feels it in her own life. As a music fan, she misses the dancing crowds that used to pack into the clubs of Greensboro. She will venture back at some point. The scene will be different.

If the friendly barista is gone, another will likely take her place.

But what about second- and third-tier friends, the people you're still formal enough to email with, but not text? The too-candid colleague you would gossip with over drinks before she got laid off during the pandemic; the parents you lingered to talk to at school drop-off; the hilarious fashion victim who tagged along to clubs before decamping to Miami?

"Casual friendships are based primarily on proximity and convenience, rather than a true connection," said Irene S. Levine, a former professor of psychiatry at the New York University school of medicine who writes about friendship. "They are linked to a situation."

The very concept of proximity seems laughable. According to one research firm, Unacast, which analyzed GPS data from millions of cellphones, Americans gathered in groups 80% less than we did before the pandemic.

The pandemic pods that so many of us created may have been a factor. By definition, joining a pod means seeing few people outside of it. And once inside, the pod can become faintly cultlike, with us-against-the-world overtones. You develop in-jokes and a shared language. Everyone else is outside the circle of trust. How careful are they? Are they safe to hang out with?

Shana Beal, a communications director at a technology nonprofit who lives in Greenbrae, Calif., saw her social circle shrink to a precious few when she was vacationing with her family and two others at a snowbound house in Lake Tahoe at the start of the pandemic.

Once back home, the "Coronavirus Crew," as the women dubbed themselves, spent the following months texting multiple times a day: "Do we need to wipe down our groceries?" "My husband and I are fighting again, I want to scream."

"I was in a tailspin, panicking, doom-scrolling, working, parenting, exploding inside," Beal, 40, said. "Knowing I had these two women there whenever I needed them made it all bearable."

But they were also all she had. Even now, there are no play dates, happy hours or dinners with other friends. "It's just this group and our family," she said. "They get me. They've seen the bad and the ugly."

The omnipresent smartphones and laptops that hold distant friends together also, paradoxically, may have helped pull them apart. Some of this was just a numbers game. How many people you can fit onto a group text without it turning into chaos. Five? Seven? Not everyone will make the cut.

But what about our closest friends? Wall Street types often talk about a "flight to quality," the tendency of investors to abandon riskier, less established stocks for blue chips during a crisis. The same might be said about friendships during the pandemic, as we winnowed our portfolio of friends down to known quantities.

Personal tragedy, in a year full of them, sometimes had the same effect.

"I always kept my wider web around me as a safety net, just in case," said Amy Lin, 31, a schoolteacher in Calgary, Canada. In August, she lost her husband to a non-covid-related illness. "Everything you had so carefully laid out disappears," she said, "and that grief just screams at you, 'You are alone!'"

In the month following her loss, Lin, said, "I had to make very specific choices about who I spent time with, and the people that I did spend time with have had to carry a really big weight in terms of my grief."

That included a best friend who drove three hours to pick her up at the hospital where her husband died. And the friends who walked with her in freezing temperatures when she needed to talk. She learned she didn't need that large acquaintance safety net.

"I don't know if I would have found this kind of radical friendship without these harrowing circumstances," she said. "My best friends just so completely showed up."

BACK TO THE FUTURE

And now it's spring. The weather is brightening; restaurants, bars and stadiums are refilling; and covid rates have plummeted nationally. Time to get the old gang back together, right?

For plenty of people, sure. But it's not always as simple as that.

"We're approaching an ending, and when people approach endings, they tend to savor instead of explore," said Laura L. Carstensen, a psychology professor at Stanford University who founded a center on longevity. Faced with the closing of a chapter, we tend to "focus on known people, known prospects, not on the expansive, the new. They're not thinking, 'Let's go try out new things.'"

College students and young single adults, Carstensen said, are most likely to slip back into pre-pandemic mode, collecting friends in bulk to maximize their opportunities to pursue mates, build careers and find their place in the world. Judging by the spring breakers flooding Florida beaches, not to mention the 20-somethings crowding maskless into underground parties, many seem plenty ready.

Others learned to appreciate the simple calm of it all.

"There was finally permission from the culture at large that you don't have to show up at everything," said Lisa Cochran, 39, a stay-at-home mother who works part time at her husband's plumbing company in Fairfax, Va. "There's a freedom there."

Even extroverts learned lessons in pulling back.

LaTonya Yvette, 31, a hairdresser in Brooklyn, used to hold giant parties. The din, dozens of people shouting to be heard over the next person. The shared energy from bodies familiar and not, packed tightly. But she has come to savor the intimate friendships that blossomed the past year, including one with a neighbor who sang with her on her stoop every night at 7 p.m. during the darkest days last spring.

"I'm so thankful to have more emotional space," Yvette said. "I don't see that changing. I don't necessarily want it to."