Arkansas scoured for hidden caves and secrets within 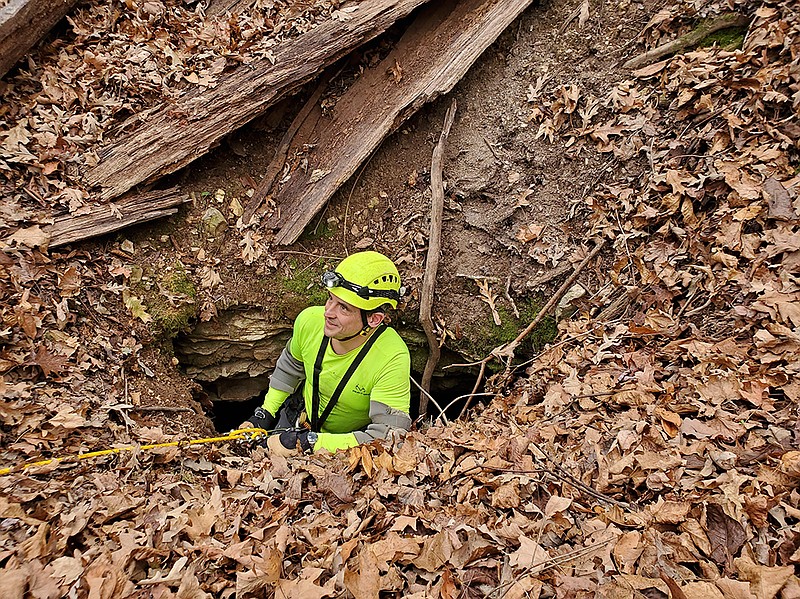 HELL CREEK -- Much of the Natural State has yet to be discovered -- at least below the surface -- but the Arkansas Natural Heritage Commission has partnered with the Cave Research Foundation to create a more-complete map and biological inventory of these dark but life-filled worlds.

Since last spring, crews of commission staffers and foundation volunteers have gathered data from 32 caves -- 22 of which were previously undocumented. Some of Arkansas' thousands of caves are home to threatened or endangered species, with a few found at only one or two sites.

"Knowing what you have is important to managing it well," foundation Vice President Kayla Sapkota said as she trekked through the Hell Creek Natural Area near Mountain View searching for undiscovered caves one day last month. "You could kill an entire population and that's the only place that population is in the whole world."

The information gathered on these expeditions will help inform land management and acquisition decisions, said Heritage Commission ecologist Theo Witsell, chief of research at the agency. The commission protects about 70,548 acres with the acquisition of the 636.3-acre tract added to the Warren Prairie Natural Area in South Arkansas in December.

"At Natural Heritage Commission, we are especially concerned with things that are rare and especially high-quality. I like to sum up what we do as we identify and protect the last of the least and the best of the rest," Witsell said. "Our mission is to protect those places or species so they can be here into the future. It just so happens that there are a lot of really rare animals found in caves."

The Cave Research Foundation offers the use of high-tech equipment, personnel training and its database to groups such as the Heritage Commission, helping it further its mission to preserve the state's natural diversity.

The foundation grew out of efforts of explorers working in the Mammoth Cave area of Kentucky in the late 1940s -- a project still going on to this day, Sapkota said. As knowledge of the cave system grew, they began recruiting a team of mostly self-funded explorers and researchers to expand their efforts to areas around the county.

Before heading out, Sapkota and Emily Roberts, a land management specialist with the Heritage Commission, consulted an image made by light detection and ranging, or LiDAR, to get an idea of where to look. LiDAR is a remote-sensing technique that uses laser light to record the surface of the Earth. Heritage Commission staff will also look at old maps and records for any notations as well as records from other agencies such as the U.S. Fish and Wildlife Service and The Nature Conservancy.

While making their way through some of 261 acres, Roberts and Sapkota kept an eye out for exposed rock, especially limestone, which is a good sign when ridgewalking, or manually searching for caves.

"That might not be anything, but it's worth checking. Sometimes you don't know until you walk right up on it," Sapkota said. "It's kind of like an Easter egg hunt for adults."

Sometimes all signs lead to a cave and others just a large depression in the ground. When they do find a new cave, they will use the DistoX digital survey instrument to take precise measurements that will be used to draw a map. Without this technology, the team would need to measure the cave manually.

Four bats on the federal endangered species list are found in Arkansas caves. The Ozark big-eared bat, gray bat and Indiana bat are listed as endangered, and the northern long-eared bat is listed as threatened.

With the exception of some tourist destinations, most of the state's caves managed by federal and state agencies have been closed or restricted to the public for more than a decade because of white-nose syndrome. This fungal disease is deadly to bats and can spread fungal spores on clothing and gear. Covid-19 has caused further cave shutdowns, Roberts and Sapkota said.

The crews make sure that anything brought in is decontaminated from cave to cave.

"We try to gate off the largest, most important caves systems that have endangered species in them, but that's part of why this work is so important to us, to discover anything else we need to protect," Roberts said. The gates also protect against other human-caused disturbances and vandalism.

Some of the caves they find are only small tunnel-like "cavelets" that can take less than an hour to map, though larger formations can contain several rooms that can take several days to document. Foundation volunteers have taught Heritage Commission staffers like Roberts how to use rappelling gear needed to explore these larger caves.

Roberts said she had fun with naming a few of the previously undocumented caves she helped to find. One she named is a smaller cave at Hell Creek.

"It has a small tunnel access. We had someone with us and that was the first access we saw, so he squeezed and shimmied through it. He made it look easy, but it was a tight fit," she said, "And then, right around the corner was a larger entrance, so we named it 'Trick Cave.'"

Six caves have been discovered and documented at Hell Creek, Sapkota said. The most well-known is Hell Creek Cave, which the creek flows through, eventually flowing into the White River. It is also home to the extremely rare Hell Creek Cave Crayfish.

This colorless, 3-inch crayfish has been found only in two caves and a spring: Hell Creek Cave and Nesbitt Spring Cave (discovered in 2002) in Stone County and Yellville Spring (discovered in 2010) in Marion County, according to the Fish and Wildlife Service.

The state has more than 60 species of crayfish, 13 of which are found only in Arkansas. Three are cave dwellers, said Dustin Lynch, aquatic ecologist with the Heritage Commission.

"These crayfish are living in areas where there's very little to eat, and they don't seem to move around a lot. We don't really know how long they live; some people think they live a really long time," Lynch said. "It's just hard to study them because of where they are."

Information like this gathered by the Heritage Commission and the Cave Research Foundation is used in larger research projects as well as environmental reviews that can help determine where new infrastructure, like roads or plumbing, is built or isn't. Endangered species and groundwater protections are factors in these reviews, said Justin Stroman, an environmental coordination biologist with the Arkansas Game and Fish Commission who writes environmental reviews.

Sometimes it's a matter of mitigation to stay in line with Clean Water Act requirements, he said. For example, a recent review Stroman did led to the Highway Department purchasing property just outside of Cave Springs to help conserve the rare Ozark cave fish and to offset impacts from bridge and road development in the area, he said.

"My interest is twofold -- both the cave critters themselves and also what impacts our developments have on the cave resources," Stroman said. "Caves are very unique ecosystems. In some of these are extremely localized, specialized creatures. They are unique to the natural heritage of Arkansas."

Sapkota said she thinks there are still plenty of caves left to find and document and probably plenty more for the next generation. Recreational caving is more difficult these days, but Sapkota said the foundation welcomes volunteers from various walks of life, as long as they're willing to learn and abide by the rules.

"We want to make sure it's someone who is focused on conservation and preservation," she said. "It's a good way to be contributing towards science and doing something worthwhile, I think."