Love and loss in a video game? The innovative and weird ‘It Takes Two’ covers both by Todd Martens and Christopher Price, Los Angeles Times (TNS) | April 5, 2021 at 1:49 a.m. 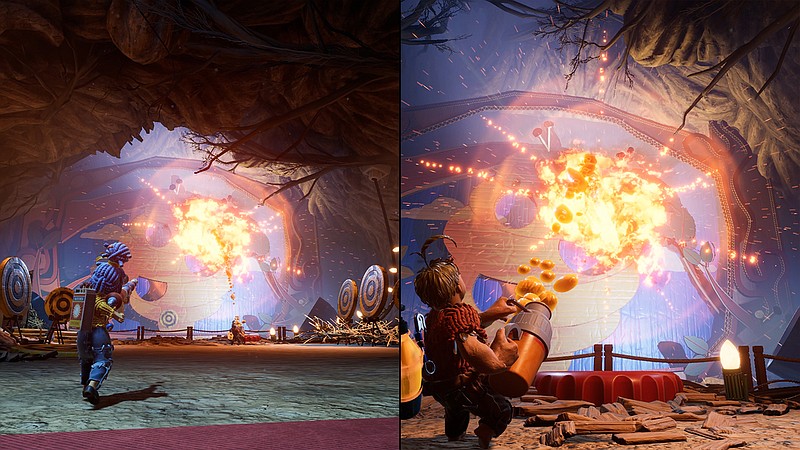 Two players cooperate and compete in split screen during "It Takes Two," a video game that grapples with serious themes about relationships, including divorce. (TNS/Electronic Arts)

Give this to "It Takes Two": It shows that movie and TV clichés — say, a couple that's a soon-to-be ex-couple working together -- translate surprisingly well to video games. But that's largely because this is a pop culture arena where such topics have yet to be regularly explored. Even when "It Takes Two" inspires a raised eyebrow, it does so with a divorce-themed story that's rare for slick run-and-jump puzzle games.

It's also arriving after a year of pandemic social distancing, in a moment in which we've learned that games can connect us. "It Takes Two" wants to bring us together by raising questions on how we fall apart.

Here, a young girl's imagination and desire for her parents to stay together transform Mom and Pop — May and Cody — into clay-like toys, forcing them to explore their home and their yard "Honey, I Shrunk the Kids"-style.

In line with the game's setup, "It Takes Two" is two-player only, either online or in person, and the bulk of the action takes place via a split screen. At least in its first few hours, "It Takes Two" seems like a rare work aimed primarily at parents — and perhaps some older teenagers — as it attempts to explore how couples drift apart and the powers that can hold people together. Its heavy emphasis on divorce could be best suited for older children.

As a character-focused, two-player game, the Hazelight Studios title makes a strong effort to match gameplay with personality. It immediately gives players roles and assigns them characters with a history (May or Cody). But it also adds an edge of competitiveness to what is otherwise a cooperative game as it aims to lighten the tension of a bickering couple with outlandish scenes and characters (an angry vacuum cleaner, a scientifically advanced squirrel community).

My colleague Chris Price and I have yet to finish "It Takes Two," the latest from developer Josef Fares ("Brothers: A Tale of Two Sons," "A Way Out"). But we spent pretty much an entire Sunday with the game, which came out March 25 for PlayStation and Xbox consoles as well as PCs.

I prefer light challenges and story-driven games that ask big questions. Price leans toward painstakingly difficult role-playing games where losing — a lot — is inevitable. What follows is our conversation about the game, edited for brevity.

MARTENS: Chris, I know you regularly play online with friends and I know you gravitate toward more competitive games than I generally do, so I'm curious, what were your initial impressions of a cooperative game like "It Takes Two"?

PRICE: It's funny, Todd, it wasn't until I started playing "It Takes Two" that I realized the vast majority of my favorite games that offer "co-op" actually don't mandate cooperation. Although I love every title in the "Soulsborne" series, "Grand Theft Auto Online" and more, players can usually get away with playing alone or summoning help to do all of the heavy lifting.

It was neat to experience a title specifically designed to foster genuine cooperation. Whether you're fighting a boss or walking through the different — and aesthetically pleasing — levels, each player is relying on the other to move forward.

When losing, when a character "dies," the game is also extremely forgiving. A simple misstep off a ledge is punishable by only a seconds-long respawn at the same place rather than complete removal from the session, and that's bound to relieve more novice players. Even the boss fights remove any potential for advanced players to blame others for letting the entire team down, as the battle continues — as long as one player can stay alive until the other returns to action.

"It Takes Two" is designed in a way that you both either sink or swim — nothing in between. 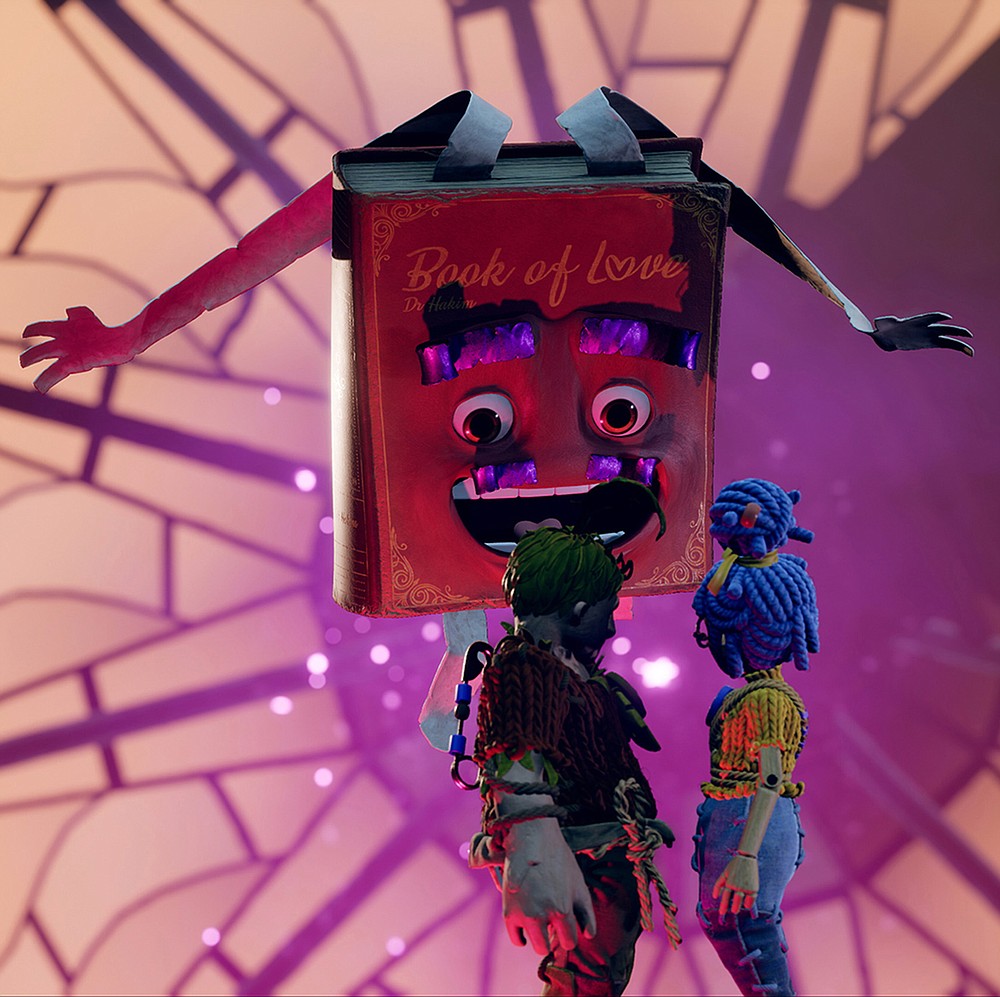 The weird Book of Love is a problem in "It Takes Two" is a video game that grapples with serious themes about relationships, including divorce. (TNS/Electronic Arts)

MARTENS: If I had a significant other, I would absolutely want to play "It Takes Two" with them. I like the way it sort of brings up little moments in a relationship and how a forgotten and old vacuum can not just be a massive monster we maneuver inside — one in which two characters are running, jumping and gliding through coils — but also a metaphor for how we move on, what we leave behind and how we forget that comfort almost always trumps whatever is new.

As someone who is relatively shy, playing games is my favorite way to get to know a new partner and I like the way that "It Takes Two" nudges toward bigger ideas. It doesn't linger on them and wants to fall back on humor, but for me it worked, as it is raising questions.

Beyond the story, though, I was also surprised at just how difficult it was. While we were able to best a number of bosses, I was getting pretty stressed with the battle with the giant beetle. I should say, for those with bug phobias, of which I am one, the insects are pretty cartoonish and there's some clever animation in the way hornets will take on World War I flying ace formations.

And that world inside the tree was pretty massive, going from homey places with squirrels to more militarized sections and on to one area in which we were kind of floating through space.

I really enjoyed those fantasy elements, how suddenly turning on a light revealed an ocean with jellyfish in a suburban backyard completely out of view of any grownups. I like that sort of magical thinking when it comes to mundane surroundings, even if we struggled mightily to fly a toy plane. And yet, as difficult as it was for us to balance the plane, I admit I was laughing. If I had been playing solo, struggling to balance a toy plane for 30 minutes, I probably would have given up in frustration.

I think that's my main takeaway. "It Takes Two" really shows the joy of playing together when you're not in a pure competitive mode.

PRICE: I usually start new games at the hardest difficulty possible, and the fun I extract from the experience comes from piecing together the storyline while clearing every obstacle the developers can throw at us.

For the controller-breaking challenge-seekers who may sometimes forget that games are supposed to be fun, "It Takes Two" definitely offers a reprieve from stress-filled battles and "You Died" statements running across your screen every few minutes.

I should also emphasize, though, while I wouldn't consider it stressful, it's certainly not easy. I remember questioning a few times what age group it was geared toward because of the complexity of some puzzles.

While I believe kids are probably smarter than all of us and can figure out elaborate puzzles in which a hammer and a nail must be used to construct pathways around giant tool kits, some of the themes are heavy and involve destruction of mementos and the need to wrangle tears from a child.

Mom and Dad are clearly, in nontoy form, overwhelmed and exhausted. I went in thinking it would be a family game and now I'm less sure.

PRICE: And yet "It Takes Two" as a whole has got me thinking that perhaps not every game has to be high pressure and induce rage quitting.

I am curious as to how the story will be resolved, though. A divorcing husband and wife unwittingly working to save their marriage is unfamiliar territory for game protagonists, which I thought was refreshingly creative from a storytelling standpoint. But whether they gently land their plane hand-in-hand into the credits or crash outside the generic "happily ever after" box will ultimately determine how memorable the story is.

As much as we'll always have great respect for the classics, it's clear today's consumer base also hungers for storylines that go deeper than the usual "damsel in distress" and revenge tropes, opening scenes that essentially served as an excuse for the game that would follow.

Oddly, I was thinking about "The Last of Us: Part II" while playing. While that game did carry some elements of revenge, its refusal to be cliché in its conclusion initially shocked and disappointed some fans, including myself, who've grown to expect cookie-cutter, warm resolutions. And it wasn't until my second play-through, after I shed my expectation that games should always be an escape from reality as opposed to possibly being as jarringly realistic as life itself, that I gladly set it atop my shelf of favorites.

After all, aren't storylines that are the most realistic and relatable sometimes the most memorable? None of this is to say the two shouldn't end up happy and in love in the end. But I think a narrative that somehow concludes as creatively as it began could leave a more lasting impression.

MARTENS: The game is walking a balance in its first half between "stay together for the kid" and actually attempting to explore why Mom and Dad stopped talking to each other.

Discussing that while battling vengeful toy plushies isn't easy. Some emotions may get the short-shrift or be handled a bit messily, but I guess I'm a little forgiving of that. When it comes to love and romance, that's life — minus the angry stuffed animals.