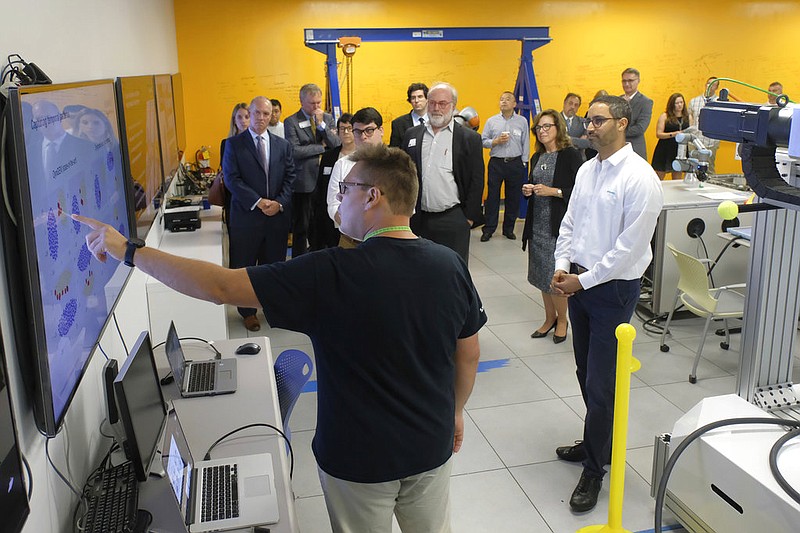 A new University of Arkansas System initiative aims to match Little Rock workers displaced by the pandemic with job training opportunities from colleges around the state.

The effort involves making available training programs now offered at all seven UA System community colleges and the University of Arkansas at Monticello. It is being funded by a $900,000, three-year federal grant.

The program's first months will involve gathering data from employers, asking, "What are the acute skill sets that you need that you can hire right now?" said Chris Thomason, vice president for planning and development for the UA System.

Industry responses will then be matched by bringing relevant training programs from around the state to the Little Rock workers, Thomason said. This would eliminate a worker's concerns about traveling for training while providing hands-on learning opportunities, he said.

The project involves helping workers like those in the tourism and hospitality industries hit hard by the pandemic, Thomason said.

"A lot of those folks have still not been re-employed," Thomason said.

Data from the U.S. Bureau of Labor Statistics shows that the number of people employed in nonfarm work in the Little Rock metropolitan area has increased since April 2020, but employment remains below pre-pandemic levels.

The Little Rock metro area, which includes North Little Rock and Conway, had 350,300 nonfarm workers in February, according to the most recent federal data, which is considered preliminary. A year earlier -- before covid-19 emerged in Arkansas -- there were 366,300 workers, a year-over-year employment decline of about 4.3%.

It's unclear how statewide health directives dropped in late February by Gov. Asa Hutchinson might have affected employment. Among these directives, converted to guidance on Feb. 26, were requirements for restaurants and event venues to keep 6 feet of distance between patrons. Statewide, the number of new daily coronavirus infections has also plunged since February, a change that could be affecting economic behavior.

Thomason said the training likely would result in workers receiving credentials such as a certificate of proficiency.

"We are confident, based upon the design, that the cost of training is going to be significantly less than what you would normally expect," Thomason said. He said that about $495,000 from the grant will be used to cover training and development expenses.

The grant, from the U.S. Department of Commerce's Economic Development Administration, is funded through the federal Coronavirus Aid, Relief, and Economic Security (CARES) Act, according to the UA System.

UA System campuses and the University of Arkansas at Little Rock are contributing another $225,000 that's considered the local investment portion of the federal grant, with the UALR portion coming from the waiver of indirect costs related to the involvement of the campus' Arkansas Economic Development Institute.

Existing data sources, such as the U.S. Bureau of Labor Statistics, are used by the institute, but Youngquist said it will be important to gather local data.

Youngquist and Thomason described data as at the heart of the project, with the grant being used to create the UA System Workforce Response and Training Center.

"The data is going to tell us," Thomason said when asked about the number of people expected to take part in the training.

"This is really the first time you see all of the training assets of all of the [UA System] schools right together under one training umbrella," Thomason said.

He said that while Little Rock workers will be aided in the grant's second phase, by year three he expects to have a model that can be used in other parts of the state. Economic development officers could then say to potential employers that training is available in the region, even if a particular program is based at a college elsewhere in the state, Thomason said.

"That's the beauty of this model, is it brings all those training programs available and makes them available statewide, at a much more cost-effective manner and at lighting speed," Thomason said.