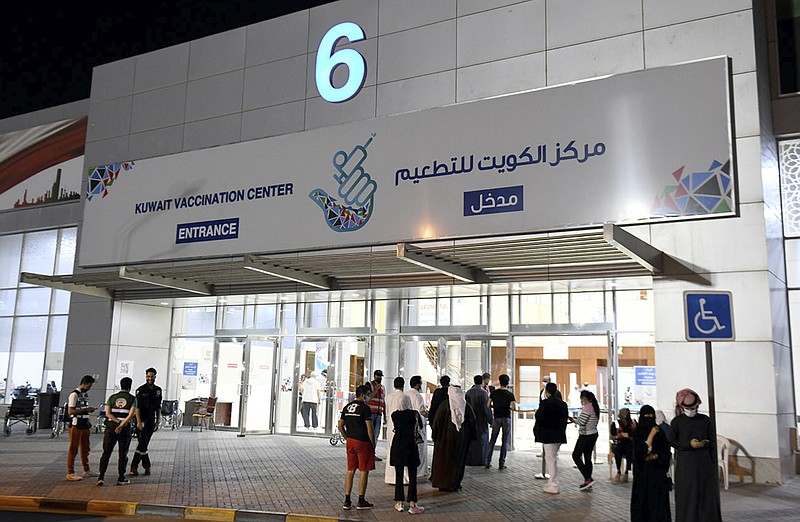 In this Friday, March 12, 2021 photo released by Kuwait News Agency, KUNA, people enter Kuwait Vaccination Centre to get the vaccine in Kuwait. In the tiny, oil-rich sheikhdom of Kuwait, the foreigners who power the country's economy, serve its society and make up 70% of its population are struggling to get COVID-19 vaccines. (KUNA via AP)

DUBAI, United Arab Emirates -- In the tiny, oil-rich sheikhdom of Kuwait, the foreigners who power the country's economy, serve its society and make up 70% of its population are struggling to get coronavirus vaccines.

Unlike other Gulf Arab states that have administered doses to masses of foreign workers in a race to reach herd immunity, Kuwait has come under fire for vaccinating its own people first.

That leaves legions of laborers from Asia, Africa and elsewhere, who clean Kuwaiti nationals' homes, care for their children, drive their cars and bag their groceries, still waiting for their first doses, despite bearing the brunt of the pandemic.

"The only people I've seen at the vaccination center were Kuwaiti," said a 27-year-old Kuwaiti doctor, who like most people interviewed for this story spoke on condition of anonymity for fear of government reprisals. "Kuwait has a citizens-first policy for everything, including when it comes to public health."

Kuwaiti authorities did not respond to repeated requests for comment on their vaccination strategy.

When Kuwait's vaccination registration site went live in December, authorities declared that health care workers, older adults and those with underlying conditions would be first in line. As weeks ticked by, however, it became increasingly clear that the lion's share of doses was going to Kuwaitis, regardless of their age or health. Initially, even some expat medical workers said they couldn't get appointments.

Kuwait's labor system, which links migrants' residency status to their jobs and gives employers outsized power, prevails across the Gulf Arab states. But hostility toward migrants has burned hotter in Kuwait. The legacy of the 1991 Gulf War, which triggered mass deportations of Palestinian, Jordanian and Yemeni workers whose leaders had supported Iraq in the conflict, fueled anxiety about the need for self-reliance in Kuwait that endures today -- even as Southeast Asian laborers rushed to fill the void.

A 30-year-old Indian woman who has spent her whole life in Kuwait watched her Instagram feed fill with celebratory photos of Kuwaiti teenagers getting the jab. Her father, a 62-year-old diabetic with high blood pressure, could not -- like the rest of her relatives living there.

"All the Kuwaitis I know are vaccinated," she said. "It's more than just annoying, it's a realization that no, this is not cool, there is no way to feel like I belong here anymore."

Kuwait has vaccinated its citizens at a rate six times that of noncitizens, the Health Ministry revealed earlier this year. At the time, despite some 238,000 foreigners registering online to book an appointment, only 18,000 of them -- mostly doctors, nurses and well-connected workers in state oil companies -- were actually called in to receive the vaccine. Meanwhile, some 119,000 Kuwaitis were vaccinated.

With vaccine information available only in English or Arabic, advocates say that locks out scores of low-wage laborers from Southeast Asia who speak neither language.

The disparity set off a roiling debate on social media, with users decrying what they called the latest instance of xenophobia in Kuwait. They say the pandemic has magnified resentment of migrant workers, deepened social divides and hardened the government's resolve to protect its own people first. Medical professionals warned that Kuwait's inoculation hierarchy damages public health.

With pressure mounting on the Health Ministry, barriers eased in recent weeks, with a growing number of foreign residents 65 and older reporting they were able to get vaccinated. Still, most expats insist the inequality in access remains striking.

"We are waiting and waiting for the call," said a 55-year-old house cleaner from Sri Lanka. "The moment I get the call, I will go. I need the vaccine to be safe."

The government has not released a demographic breakdown of vaccinated foreigners vs. Kuwaitis since the outrage over the inequality erupted in mid-February, only overall vaccination statistics. As of last week, 500,000 people have received at least one dose of either the Pfizer-BioNTech or the Oxford-AstraZeneca vaccine, according to health authorities.

Even as the bulk of frontline workers in grocery stores and cafes remains unvaccinated, Kuwait is making plans to reopen society for the inoculated. Those who can prove they got the jab will be able to attend schools in the fall, go to cinemas in the spring and skip quarantine after flying into the country, the government announced.

Foreign workers in Kuwait have felt this frustration before. When the pandemic first struck, lawmakers, talk show hosts and prominent actresses blamed migrants for the virus's spread.

As the coronavirus ripped through crowded districts and dormitories where many foreigners live, authorities imposed targeted lockdowns and published surging virus counts with a breakdown of nationalities. When infections among Kuwaitis rose, the government stopped releasing demographic data.

"It's easy for migrants to be seen as the root of all problems in Kuwait," said Rohan Advani, a researcher of sociology at the University of California, Los Angeles. "Citizens don't have political or economic power, so when they don't like what's happening to their country, blaming foreigners becomes the main outlet."

Despite Kuwait's outspoken parliament, final power rests with the ruling emir. Kuwaiti citizens, who are guaranteed spots on the public payroll and reap the benefits of a cradle-to-grave welfare state, increasingly have clamored for policies that limit the flow of migrants.

Earlier this year, the government banned the renewal of visas for expats older than 60 without college degrees, effectively expelling an estimated 70,000 people, including many who have lived in Kuwait for decades.

"This discrimination is not new for us. The pandemic has just highlighted the worst of it," said a 30-year-old Lebanese woman who grew up in Kuwait and whose older relatives are still waiting for vaccines.

"But this is life and death," she said. "I never really thought it would reach this point." 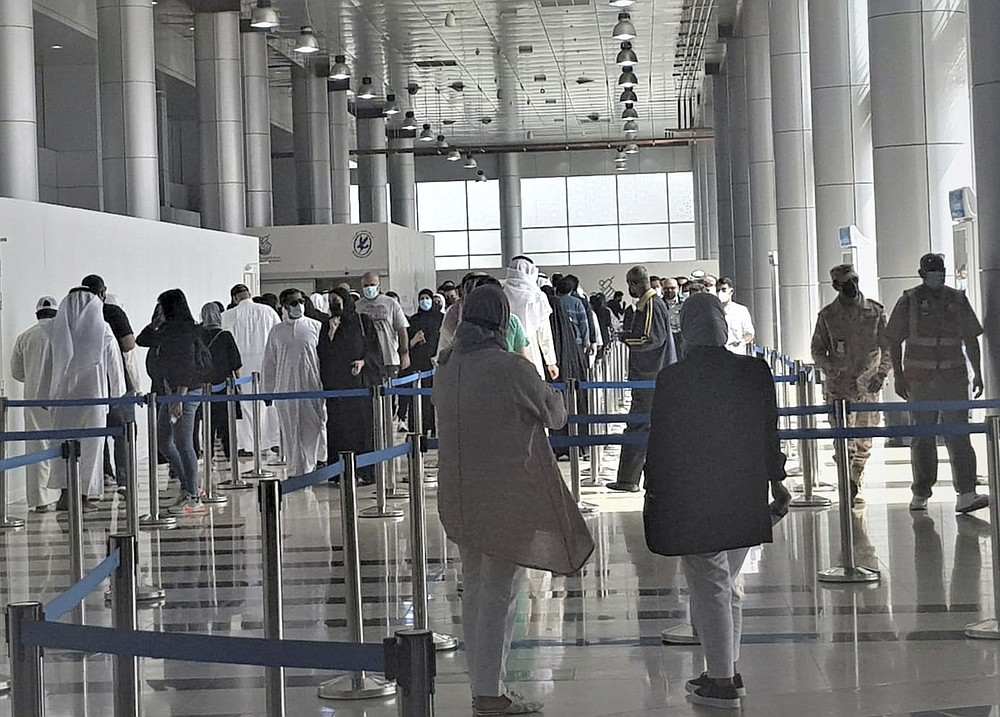 In this Friday, March 12, 2021 photo released by Kuwait News Agency, KUNA, people stand in line at Kuwait Vaccination Centre to get the vaccine in Kuwait. In the tiny, oil-rich sheikhdom of Kuwait, the foreigners who power the country's economy, serve its society and make up 70% of its population are struggling to get COVID-19 vaccines. (KUNA via AP)
ADVERTISEMENT