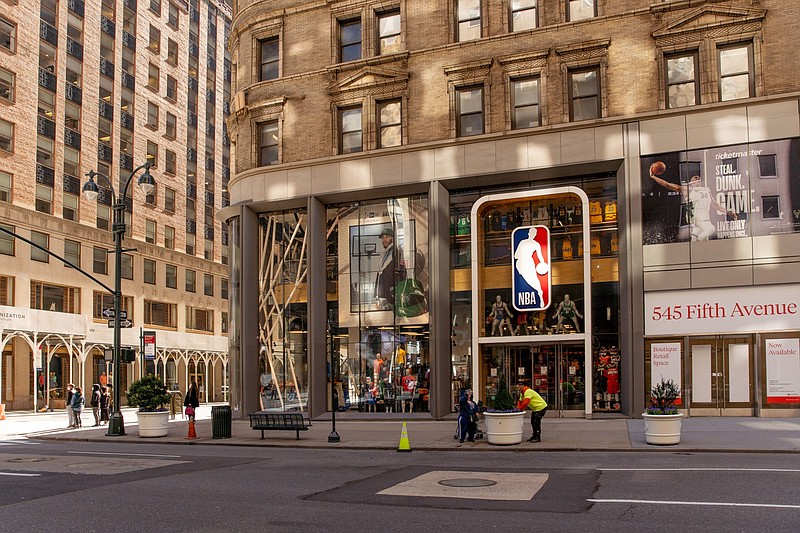 Not long ago, major fashion brands were willing to pay ballooning rents just to have a store on Manhattan's Fifth Avenue. Now, the world-famous shopping strip has transformed into a battleground between landlords and tenants seeking a way out of pricey leases.

It's a side effect of the pandemic that's plagued New York City for more than a year. The foreign tourists who were Fifth Avenue's lifeblood before the lockdown are gone. So, for the most part, are the office workers who might have stopped at a store while hustling by.

The few merchants looking to sign new leases are demanding deep discounts. Some that have been there all along -- such as the National Basketball Association, Valentino and Marc Fisher -- are embroiled in legal battles with their landlords over unpaid rent.

Along a roughly 20-block stretch of Fifth Avenue, the handful of landlords involved in legal disputes are owed about $200 million.

"The numbers are big," said Tom Mullaney, a managing director at brokerage Jones Lang LaSalle. "If some of the tenants are financially stressed and they lose, it'll be very painful. Conversely, if some of the landlords are overleveraged and have cash-flow issues, it can be traumatic for them, too."

Since March 2020, struggling retailers across the U.S. have missed billions of dollars in rent payments, citing lost sales because of social-distancing rules and other pandemic restrictions.

The NBA has kept its three-story store at 545 Fifth Ave. shuttered, even as neighboring spaces gradually reopened. The basketball league has racked up more than $8 million in missed payments, said Ed Klein, the attorney for landlord Moinian Group.

Ten blocks north, Valentino decided to walk away from its four-level space at 693 Fifth Ave. and sought in court to be released from the roughly eight years remaining on its lease. A New York state judge ruled against it, but the retailer has filed a notice for appeal. In turn, the Italian luxury label's landlord filed a lawsuit seeking $207 million -- not just to cover lease payments but also for damages to the shop's Venetian terrazzo marble panels.

This month, the Trump Organization sued footwear maker Marc Fisher, a tenant at Trump Tower, for more than $1 million in missed rent dating back to November.

Representatives for Marc Fisher and the NBA didn't respond to requests for comment. A Valentino representative declined to comment.

The outcome of these dragged-out disputes may have a lingering impact on Fifth Avenue.

"They will likely never be what they've been before," Simeon Siegel, an analyst at BMO Capital Markets, said of Fifth Avenue's flagship stores. "But at the end of the day, they're still one of the best ways to reach people -- if people are there."

The reduced demand for space has forced landlords to cut prices. Ground-floor asking rents on Lower Fifth Avenue, from 42nd to 49th streets and dominated by national chains, fell 20% in the fourth quarter from a year earlier, data from Cushman & Wakefield show.

Luxury-leaning Upper Fifth Avenue, stretching to 60th Street, fared better. Rents there slipped 3.7% to $2,575 a square foot on average. For both areas, more than 23% of the retail space is available, according to the brokerage.

There are some tenants who have signed new deals, lured by bargain rents. Spanish fast-fashion chain Mango secured a substantially discounted sublease from Ralph Lauren, according to people familiar with the matter. Across the street, luxury jeweler Harry Winston recently agreed to expand into a neighboring space at 712 Fifth Ave., the former Henri Bendel store.

Mullaney is betting on the long-term revival of Fifth Avenue and other major U.S. shopping districts, but the short-term outlook is more grim. 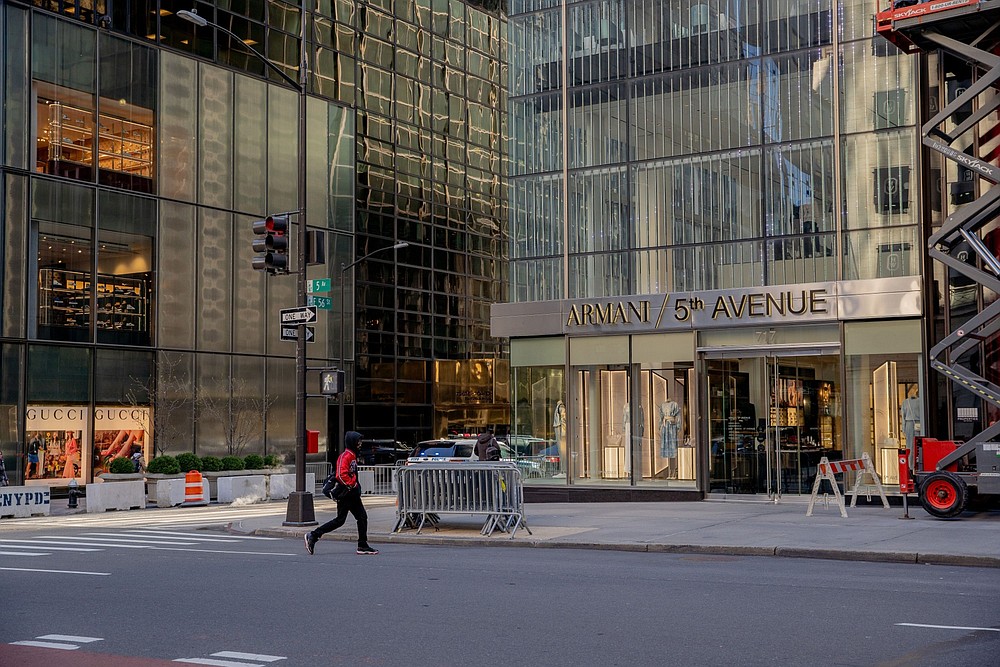 Giorgio Armani's boutique and restaurant at 56th Street and Fifth Ave in New York on March 30, 2021. MUST CREDIT: Bloomberg photo by Amir Hamja. 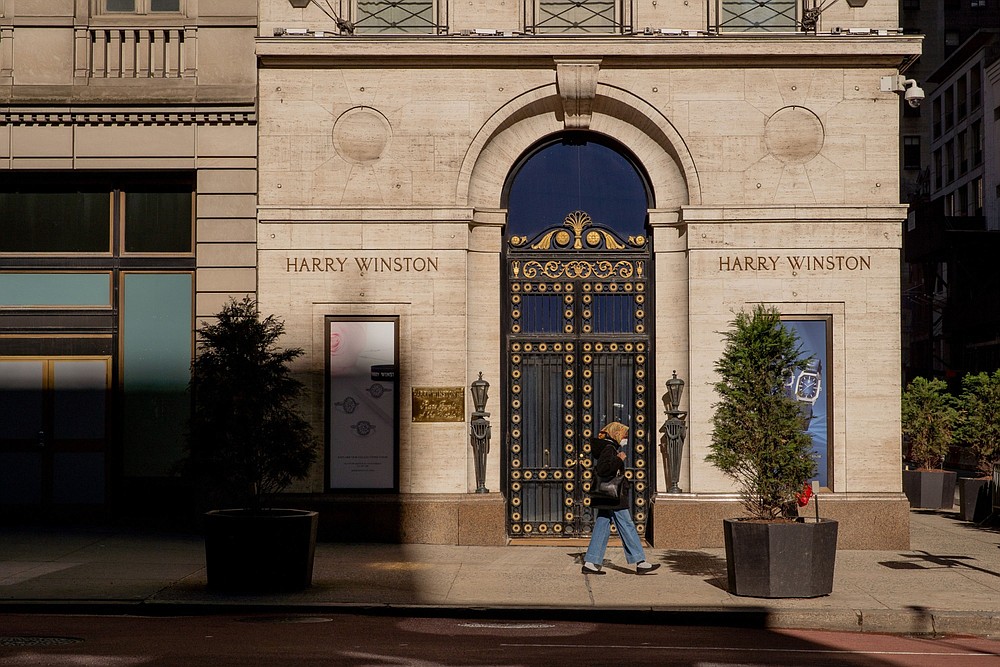 A pedestrian walks past luxury jeweler Harry Winston at 712 Fifth Avenue in New York on March 30, 2021. MUST CREDIT: Bloomberg photo by Amir Hamja. 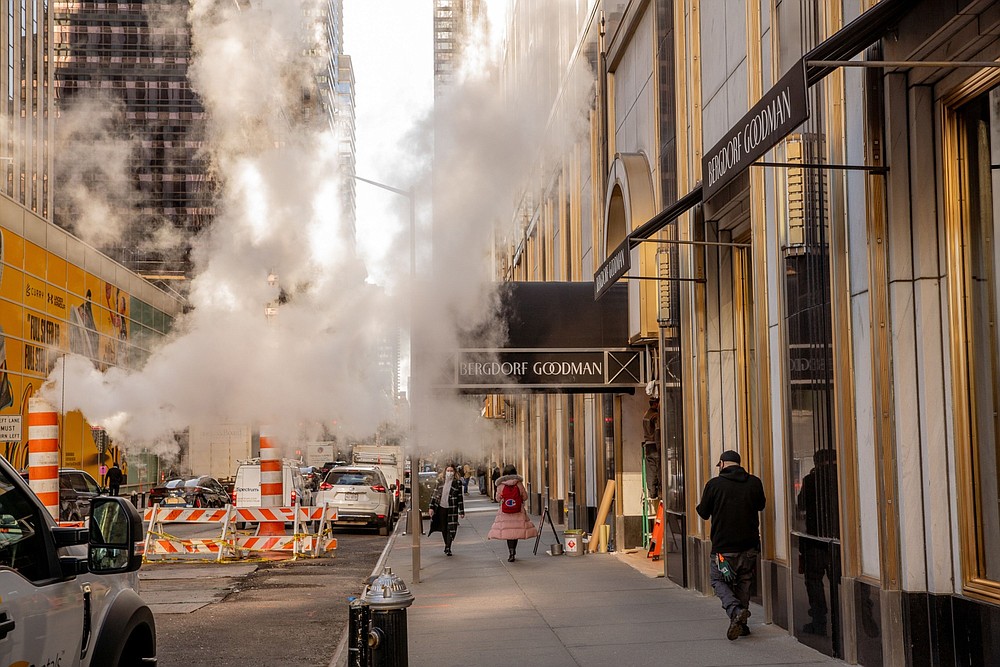