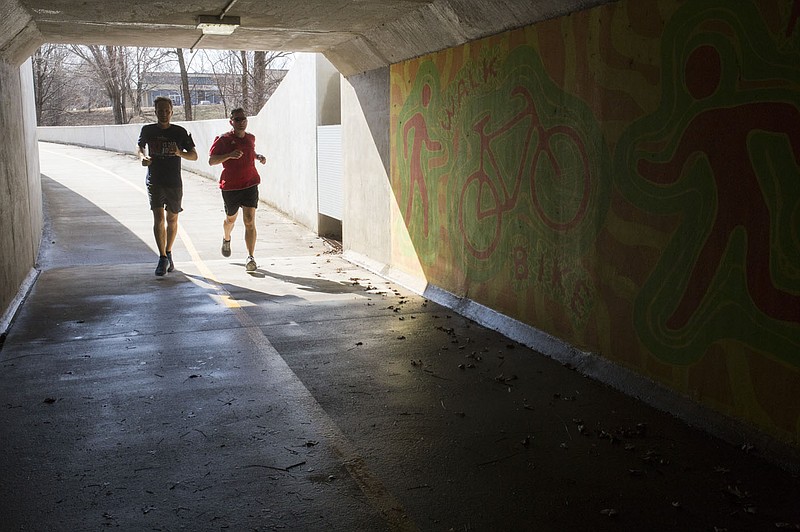 NWA Democrat-Gazette/CHARLIE KAIJO Joggers make their way through a tunnel on a bike path Feb. 15, 2018 at the Razorback Greenway in Bentonville.

Benton and Washington counties held their spots as the healthiest in the state in an annual report released last week.

The County Health Rankings and Roadmaps report by the Robert Wood Foundation ranked Benton County as No. 1 in the state in health outcomes and health factors.

Health outcomes include results such as the rate of premature deaths and how much of the population is in poor or fair health.

The health factors ranking takes into account about 30 factors such as smoking, access to exercise, children in poverty and how many doctors practice in the county. Washington County ranked as No. 2. in health outcomes and No. 3 in health factors.

The two counties maintained their spots from the year before. Northwest Arkansas consistently is the overall healthiest part of the state is largely because of social and economic factors, said Ericka Burroughs-Girardi, senior outreach specialist for County Health Rankings and Roadmaps.

Obesity can lead to cancer, diabetes, stroke, sleep apnea, high blood pressure and high cholesterol among other health problems, according to the federal Centers for Disease Control and Prevention.

"People and families may make decisions based on their environment or community," according to the Centers for Disease Control. "For example, a person may not walk or bike to the store or to work because of a lack of sidewalks or safe bike trails. Community, home, child care, school, health care and workplace settings can all influence daily behaviors. Therefore, it is important to create environments that make it easier to engage in physical activity and eat healthy foods."

Communities can offer amenities such as parks to make being healthy easier, but people don't always take advantage of those, Burroughs-Girardi said. They also may have environments or lifestyles requiring long commutes making it more difficult to exercise or cook healthy meals.

Health is more than going to the doctor.

"It's being able to have the income to make healthy choices," she said.

People who make more money are more likely to easily afford healthy food and live in neighborhoods where they can send their kids to well-funded schools, which means those kids are more likely to have more education and more opportunities for higher incomes.

"They feed into each other," she said.

Half of children lived in poverty in Phillips County, which ranked the lowest in health outcomes and health factors.

Northwest Arkansas also had lower smoking rates than most of the state with 19% of Benton County's adult population and 21% of Washington County's adults reporting they smoked. The state's rate was 24%.

The number of health professionals practicing in Northwest Arkansas also contrasts from the state as a whole, even given its population.

County Health Rankings and Roadmaps now tracks high school completion as a health factor. The rankings previously included high school graduation, which did not account for people who had received a general education development (GED).