Redbugs look back on title season 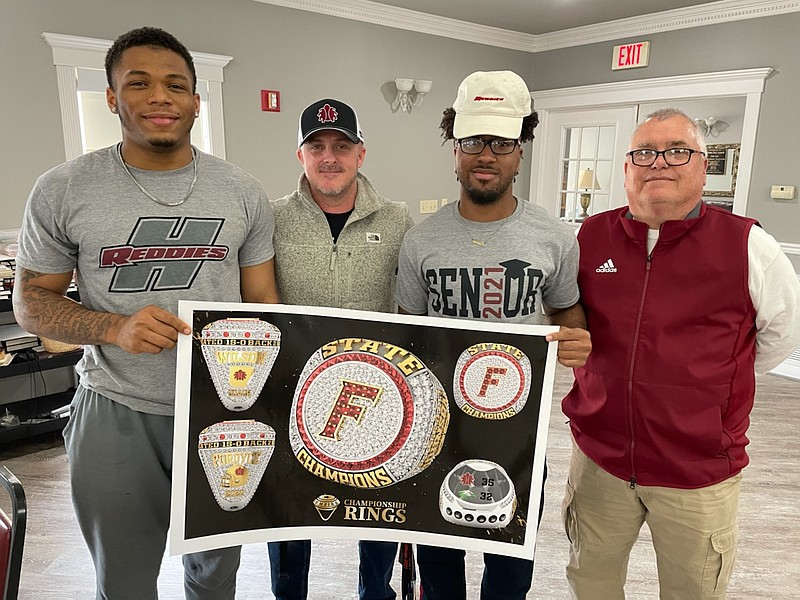 When a student athlete gets a college scholarship, it's because they worked hard to get it and not because of the efforts of a coach.

That was one of the messages from members of the Fordyce High School coaching staff as they looked back over their most recent championship season.

On Dec. 14, 2020, defending football champs, the Fordyce Redbugs, edged out Des Arc 35 to 32 in the 2A Arkansas High School Championship for their second title in back-to-back years.

"I always love talking about Redbug football and all the folks who do things for us," Rogers said, adding "As head coach, I just try not to get in the way and mess things up."

"We had 12 great senior players this past season and a group of great coaches. Great players help make great coaches and great coaches bring out the best in their players. Most all 12 graduating seniors played on both sides of the ball. For 2021-22, we will be replacing eight defensive starters and nine on offense," Rogers said.

"Several of our seniors are going on to college ball with athletic scholarships," he said.

He referenced a pair of senior Redbug players who accompanied the coaches to the meeting.

"Gary Lewis is headed to Henderson State University on scholarship because of his talent and good grades. We tell parents that we coaches don't get your son a scholarship. He made his grades and proved to be a great athlete and that's what got him there," Rogers said.

"Another senior that helped us make the championship this past year was Romario Johnson. He wasn't a full-time starter but is one of those guys who can fill any position as needed. He played special teams and was a reliable replacement for injuries. He is going to South Arkansas University on scholarship. Again, without testing well and making good grades, universities can't recruit him," Rogers said.

The coach went on to discuss another student.

"Another impressive senior and great kid not here today is Carson Williams. He received a recruiting call from the Air Force Academy. You have to be a great athlete, top student and have strong moral character to be in that group of candidates," Rogers said.

He then turned his attention to the upcoming season.

"The schedule next year is the same as this past with the exception that we will have seven home games as opposed to only three in 2020," Rogers said.

While no one knows what the future holds, Rogers said he hopes that restrictions will be lifted enough that people can come out and fill the stands at hometown high school football games and root for the Redbugs. He also said the junior high Baby Bugs will have five home games in Paul "Bear" Bryant Stadium.

"We are supposed to be receiving our 2020-21 AA State Championship rings in April. I tell the guys this is something special you'll have for the rest of your life. We want to thank the local businesses that chipped in and helped us purchase the rings," he said.

Bringing out a compact jewelry box containing his collection of championship rings, Rogers said, "I've had the opportunity to see Coach Larry Lacewell speak several times and he always does a great job. He'll begin a talk by dumping out a sack of 30 or 40 rings on the table. He'll start picking them up and saying, 'I got this one when the Cowboys went to the Super Bowl' and so on."

Opening the box, Rogers began showing the crowd each ring in his personal collection from his three trips with the Redbugs to War Memorial Stadium along with some additional weightlifting competition championship jewelry. Holding up one final ring in the form of a gold wedding band, he added, "This ring is from the only championship I lost and she's gone," he said slamming the box lid shut with a grin and a whimsical flourish.

Rogers introduced his assistant coach saying, "When we put Coach Socia in charge of the weight room, we got bigger, stronger and faster. That's when we turned things around and began our march to the championship."

Socia then shared his own training philosophy.

"We go through four-week cycles in our weight training regimen. Those improvements in fitness have translated on the field. As a result, we haven't had cramping and we continue to play well in the fourth-quarter," Socia said.

"We're replacing a lot of guys but we have some very talented young men in the weight room right now and they are totally bought in to our program," he said.

Rogers concluded his address with thoughts regarding the future of Redbug football.

"We are going to try to do again this year what we've done the last two years. We have gotten kind of spoiled with the class of seniors we had playing for the past four years. It's going to be harder because we've lost all kinds of positions and we won't have the skills people we had in 2019 and 2020. But we have some strong ninth and 10th graders who are going to step up. I believe we're going to have a good chance to do it again."