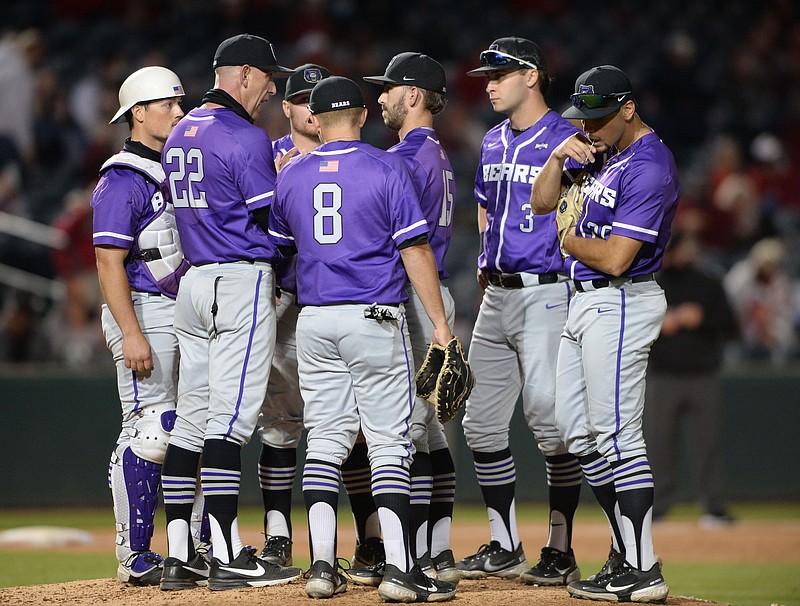 The University of Central Arkansas baseball team postponed its Tuesday game at Arkansas State University due covid-19 issues within the Bears program, UCA announced Sunday evening. The Bears also canceled a weekend trip to No. 16 Oklahoma State in Stillwater, Okla.

UCA plans to reschedule the single-game meeting in Jonesboro for a later date.

The sidelined Bears (9-16, 6-10 Southland) sit in 11th-place of the 13 league-team conference and have lost five consecutive games, including a four-game sweep by Sam Houston State in Conway over the weekend. UCA is next scheduled to travel to the University of Arkansas at Little Rock on April 13 before a four-game series at Texas A&M-Corpus Christi from April 16-18.

ASU (8-14, 3-3 Sun Belt) next heads to Sun Belt West Division leading Louisiana-Lafayette for weekend, now locked in a three-way tie with UALR and Texas-Arlington following the Red Wolves' sweep over the Trojans. ASU is scheduled to visit the Bears in Conway on April 20.

The University of Arkansas men's team upset No. 3 Tennessee 4-3 on Sunday at the Billingsley Tennis Center in Fayetteville.

It is the second victory for Arkansas over a top-15 team this season and the highest ranked victory in program history since 2003. Arkansas also beat No. 5 Baylor on Feb. 1.

Melvin Manuel got the Razorbacks started with a 6-2, 7-5 win over Mark Wallner. After the Volunteers won at the No. 2 spot, Nico Rousset made it 2-2 with an upset win over No. 50 Martim Prata. It was Rousset's 10th win of the dual season and third victory over a nationally ranked opponent.

Adrien Burdet matched Rousset for the team lead after upsetting No. 96 Pat Harper, 6-4, 2-6, 6-4. It was his first victory over a ranked opponent this season.

With the score tied 3-3, the match came down to the deciding third set between Aleksa Bucan and Volunteer Luca Wiedenmann. Bucan picked up a win in the first set tiebreaker, 7-6 (7-5), before dropping the second set. The freshman battled back in the third to clinch the match for the Hogs, 6-4. Wiedenmann came into the day with a 17-1 singles record during the dual season.