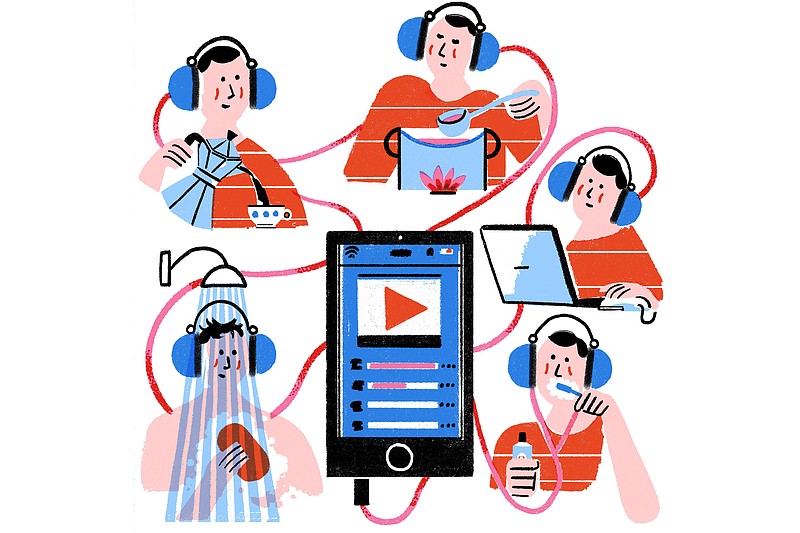 One full year into the pandemic, the end is finally in sight. President Joe Biden has promised to make every American adult eligible for vaccination by May, with the goal of a return to some version of normal life by the summer. Until then, though, we still need to find ways to hunker down and pass the time. And if you've already exhausted your Netflix queue and made your way through this year's Oscar contenders, consider making your next binge an audio one.

Whether you're craving a twisty thriller, a quirky spy documentary or an award-winning exploration of an American musical icon, each of these seven limited series can be enjoyed in a single daylong gulp.

There's no shortage of conspiracy theories about the Central Intelligence Agency — including a claim that it actually invented the term "conspiracy theory" — but none quite like the one at the heart of this eight-part nonfiction series. Here's the premise: The CIA orchestrated the writing of "Wind of Change," an anthemic power ballad by the German heavy metal band Scorpions. Why? As part of a covert campaign to undermine the Soviet Union during the Cold War, of course. Hosted by Patrick Radden Keefe, a writer for The New Yorker, this podcast from Crooked Media takes the listener on a labyrinth of a story, one that encompasses interviews with ex-spies and aging rockers alike, and may change the way you see pop culture forever. Starter episode: "My Friend Michael"

Wondery, now a podcasting powerhouse that was recently bought by Amazon, enjoyed its breakout moment in fall 2017, when the network (in tandem with the Los Angeles Times) released the first few episodes of its gripping saga about an abusive con artist and the women he almost destroyed. That show, "Dirty John," takes place in the idyllic oceanfront setting of Orange County, Calif., where Debra Newell is about to go on a first date with a dreamy doctor named John Meehan. Suffice it to say, Meehan is not what he seems. A TV version was released on Bravo in 2018, but nothing matches the raw force of the audio original — particularly the breathtaking finale, in which Meehan's disturbing behavior reaches its awful zenith. Starter episode: "The Real Thing"

Picture this: You rent a video from a video store, back when those were a thing. The following day, you go to return the video only to discover that the store is gone. You're not lost or confused — the store has genuinely vanished. This "Twilight Zone"-esque experience is just one of the real-life mysteries that Starlee Kine investigates in "The Mystery Show," an early hit from Gimlet Media. After the murder mystery "Serial" changed podcasting forever in 2014, there was an onslaught of copycat shows trying to cash in on the same formula by re-examining cold cases. Kine, though, focuses on low-stakes puzzles that involve no true crimes but are nonetheless utterly captivating. Starter episode: "Case #1: Video Store"

Blending the old-school pleasures of a radio play with a distinctly modern premise, "Passenger List" is one of the best fictional podcasts of recent years. After a flight from London to New York disappears without a trace somewhere over the Atlantic Ocean, the twin sister of one of the doomed passengers (played by Kelly Marie Tran) sets out to uncover the truth about what really happened. Playing on timely anxieties surrounding events like the disappearance of Malaysia Airlines 370, the show from PRX's "Radiotopia" is an addictive popcorn thriller for your ears and now an unexpectedly nostalgic treat for those missing air travel. Starter episode: "Traffic"

You don't have to be into country music in general, or Dolly Parton in particular, to be pulled in by this Peabody-winning exploration of how the multifaceted star became such an enduring icon. Although much of the show from WNYC Studios is taken up with conversations about just how beloved Parton is by everybody who knows her, "Dolly Parton's America" avoids hagiography by taking its title seriously, exploring the Dollyverse against a broader national backdrop. The host, Jad Abumrad ("Radiolab"), begins the series by explaining his own connection to the star — he hails from Tennessee just like Parton — and the moment in 2016 that made him see her as a unifying force in an otherwise divided nation. Featuring interviews with musicians, historians, fans and Parton herself, this is the kind of nuanced and intimate profile that audio does best. Starter episode: "Sad Ass Songs"

Last year saw the release of two buzzy rival documentaries about the sex trafficking cult Nxivm, whose leader, Keith Raniere, was recently sentenced to 120 years in prison. But long before either show, CBC Radio was the first to delve into the horrifying and deeply peculiar world of Nxivm, whose members famously included "Smallville" actress Allison Mack and liquor heiress Clare Bronfman. In "Escaping Nxivm," the first season of CBC's ongoing "Uncover" podcast series, journalist Josh Bloch interviews Sarah Edmondson, a former key member of Nxivm who has now become its most famous whistleblower. An actress by trade, Edmonson makes for a compelling central figure, her voice vividly emotional as she recalls the nightmarish ways Raniere and his chosen leaders gradually chipped away at her sense of self. A tough listen that showcases the unique intimacy of podcasting. Starter episode: "The Branding"

Many podcasts have found success by re-examining well-known political scandals through a fresh lens (most notably Slate's "Slow Burn"), but this gem from MSNBC pulls off the same trick with a scandal that almost nobody remembers. That's because Watergate was dominating headlines at the time, but in "Bag Man" Rachel Maddow pulls back the curtain on an adjacent 1973 investigation that saw Vice President Spiro Agnew accused of brazen political corruption. Maddow does not hesitate to point out what she sees as parallels to President Donald Trump — Agnew angrily dismissed the investigation as a "witch hunt" in one example — and for anyone missing the juicy palace intrigue stories that came out of the Trump White House, this is a must-listen. Starter episode: "An Unsettling Secret"