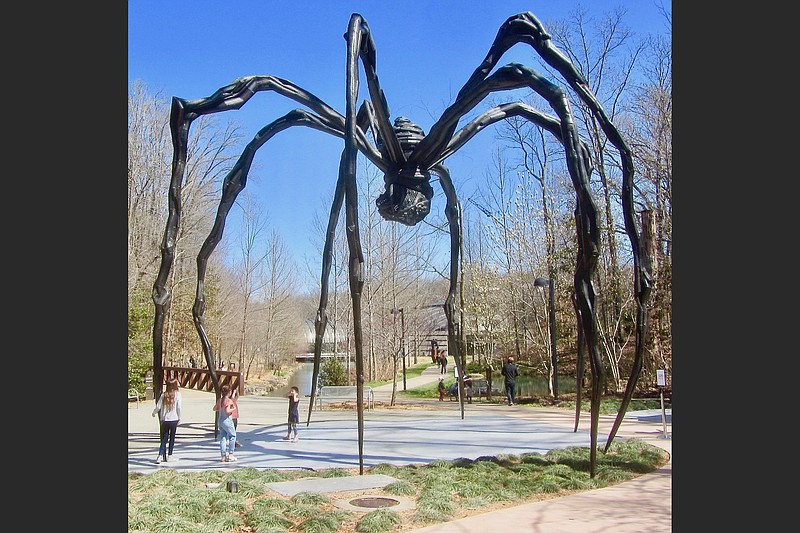 BENTONVILLE — A short outdoor stroll is now needed to view one of Crystal Bridges Museum of American Art's most awesome sculptures, which formerly towered over visitors in the courtyard entrance to the galleries.

"Maman," the 30-foot-tall spider created by Louise Bourgeois, has been moved to the museum's Art Trail. That paved pathway, shared by hikers and bicyclists, extends for six-tenths of a mile from the south lobby of the complex's eight linked pavilions.

The museum's website explains the reason for construction work behind the huge sculpture's move: "The courtyard area will be enclosed in a glass dome, expanding the lobby from its current location all the way to the Museum Store. These updates will allow for more space in the lobby, protection from weather, more future programming opportunities, and a more convenient and comfortable visitor experience."

At the new "Maman" location, a plaque describes the artist's intended message: "Like an umbrella in a storm, 'Maman' shelters this space, looming over us in a protective yet mysterious way. 'Maman' is the French word for 'Mom.' The image of the spider refers to the artist's mother, whom she has described as her closest friend. Though spiders can inspire fear for some people, Bourgeois thought of this spider as caring, helpful and hardworking — the way she remembered her mother."

One of the Art Trail's most familiar sculptures stands at the start of the walk. It's a rendering of Robert Indiana's capital-lettered "Love," originally created in 1970. Animal life is a theme of other works along the trail, where signs alert walkers that bicycles are also welcome.

Nature's food chain is depicted in Dan Ostermiller's bronze "Shore Lunch," which shows a brown bear about to devour a salmon or trout. An ursine trio stands erect near the end of the trail in Paul Manship's "Group of Bears." Facing each other across the trail are the competitors of an Aesop's fable in Nancy Schon's "Tortoise and Hare." In Andre Harvey's feel-good "Stella," a bronze pig gives a grin to passing visitors.

There's an aura of mystery to one trail structure, crafted in circular form by James Turrell, who calls himself a "sculptor of light." Built from native stone, "Skyspace, The Way of Color" offers a view of the sky altered by stunning lighting effects at dawn and dusk.

As Crystal Bridges heads toward the 10th anniversary of its opening in November, the Art Trail is one of seven designated routes for exploring the 120 acres of wooded terrain. The paths are mapped out in a brochure available in the museum's lobby. Free timed entry reservation via CrystalBridges.org is required for free access to the museum and trails, while there's a charge to see the splendid temporary exhibit "American Crafts."

The North Lawn Trail, shortest of of Crystal Bridges' seven marked routes, takes visitors past several other sculptures. The longest path is the 1.4-mile North Forest Trail. A highlight of the Tulip Tree Trail is a scaled-down mock-up of the museum's striking roof structure.

Rock Ledge Trail features large expanses of serviceberry trees and wild hydrangeas. Crystal Spring Trail leads to a ridge with an overlook for expansive views of the museum and its park. Orchard Trail passes through an evergreen forest with several pine-tree species as well as Eastern red cedars.

Along with the huge "Maman" spider, the Art Trail recently added another sculpture that is among the smaller outdoor works. Created by Kelly Graham, it is titled "My Best Friend: Good Friday Walton." A plaque tells its heartwarming provenance:

"On his namesake day in April 2006, Good Friday Walton wandered up to the home of Crystal Bridges founder Alice Walton, and they've been best friends ever since. The actual-size statue captures Friday's sweet, intuitive and pleasing personality — and invites all dogs for a drink of water from the fountain. In Alice's own words, he's a great reminder that if we could all listen and be as sensitive as dogs are to our needs and emotions, the world would be a better place."