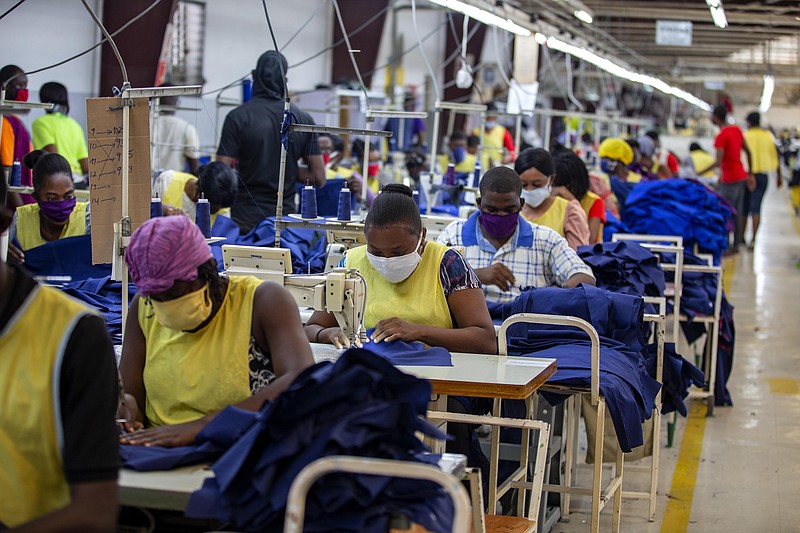 PORT-AU-PRINCE, Haiti -- Haiti does not have a single vaccine to offer its more than 11 million people over a year after the pandemic began, raising concerns among health experts that the well-being of Haitians is being pushed aside as violence and political instability across the country deepen.

So far, Haiti is scheduled to receive only 756,000 doses of the AstraZeneca vaccine through a United Nations program aimed at ensuring the neediest countries get covid-19 shots. The free doses were scheduled to arrive in May at the latest, but delays are expected because Haiti missed a deadline and the key Indian manufacturer is now prioritizing an increase in domestic demand.

"Haiti has only recently completed some of the essential documentation that are prerequisites for processing of a shipping order," said Gavi, the Vaccine Alliance, a Geneva-based public-private partnership that is co-managing the U.N.-backed COVAX effort.

The country also didn't apply for a pilot program in which it would have received some of its allotted doses early, according to the Pan American Health Organization. However, a spokeswoman commended its other pandemic efforts, including reinforcing hospital preparedness.

"It's no secret that we don't have excellent conservation facilities," he said. "We wanted to be sure that we had all the parameters under control before we received vaccine stocks."

Adrien also noted all the money his agency received has been properly spent, but said he could not speak for other agencies. A presidential spokesman did not return calls for comment.

Many poorer countries have experienced long waits in getting COVAX vaccines as richer countries snapped up supplies, though most have received at least an initial shipment. Some took matters into their own hands, securing shots through donations and private deals.

Haiti's lack of vaccines comes as it reports more than 12,700 cases and 250 deaths, numbers that experts believe are underreported.

While masks remain mandatory at Haiti businesses, airport closures and curfews have long since been lifted, and other precautions are rare.

"People don't really believe in the coronavirus," said Esther Racine, a 26-year-old mother of two boys whose father died in the catastrophic 2010 earthquake.

Racine once worked as a maid but began selling masks at the beginning of the pandemic, making brisk business with some 800 sales a month. Now, she barely sells 200.

"Look around," she said, waving at a maskless crowd bustling around her in downtown Port-au-Prince. The only customers nowadays are those who need a mask to enter a nearby grocery store, she said, adding that Haitians have other problems on their mind: "People worry more about violence than the virus."

Ongoing protests and a spike in kidnappings and gang-related killings have some wondering how any vaccine will be administered given the lack of stability coupled with a growing number of people afraid to leave their homes.

Many also fear being inoculated, despite educational campaigns. In addition, some officials have raised concern about the AstraZeneca vaccine, which has recently come under scrutiny in Europe after a very small number of people who received it developed unusual blood clots.

"We can receive the vaccine and then discover with a heavy heart that the stocks expired a couple of months later because no one wanted to be vaccinated," Adrien said.

Among those in Haiti who say they will not be vaccinated is Dorcelus Perkin, a brick factory owner. On a recent morning, the 60-year-old supervised more than a dozen employees working outdoors. No one was wearing any personal protective equipment.

"We can't wear masks in the sun. We would be suffocating," he said, adding that the sun kills the virus, something scientists have not proven.

Perkin also credited drinking a traditional green tea mixed with salt every day for his good health: "I believe more in these remedies than the vaccines. I don't know what's in the inside of these vaccines."

International groups are behind most of the resources and educational campaigns related to covid-19 in Haiti, with the Pan American Health Organization providing the government 500 test kits, along with instruction on lab diagnosis and virus detection. It also supplied thermometers, personal protection equipment and other items including megaphones and batteries as workers fanned out into rural areas.

In addition, the Pan American Health Organization trained more than 2,800 health workers in Haiti and met with community leaders including Voodoo priests and traditional birth attendants to share information about protective measures and treatment centers.

In May 2020, the organization's director said she was particularly concerned about the effects of a potential large-scale outbreak given Haiti's frail health care system and the fact that many live in overcrowded households and lack access to clean water. But perplexed experts say that anticipated outbreak has not happened.

"It's a surprise to a lot of people," said Aline Serin, head of mission in Haiti for the international aid group Medecins Sans Frontieres. "For the moment, there is not enough research and documentation to explain why some countries were less affected by severe covid-19 cases."

Meanwhile, it's unclear exactly when the country's first vaccines, via COVAX, will arrive.

Haiti is among 92 low-income countries expected to receive them. It's also among dozens that will be affected by last week's announcement of a suspension of deliveries in March and April of doses made for the program by the Serum Institute of India -- the world's largest vaccine maker -- amid a spike of coronavirus cases in India.

When the shots do become available, experts acknowledge it will be a struggle to get them into arms.

They would have to convince Haitians like Duperval Germain, a 55-year-old carpenter who said neither he nor his children will be getting a vaccine. He worries about falling ill from it and not being able to receive proper medical care.

"All these heads of state who have been here, any time they get sick, they all fly out of here," he said. "If we get sick, where would we go? They can keep [the vaccines] to themselves. Use it in places that need it. Haiti doesn't need the vaccine." 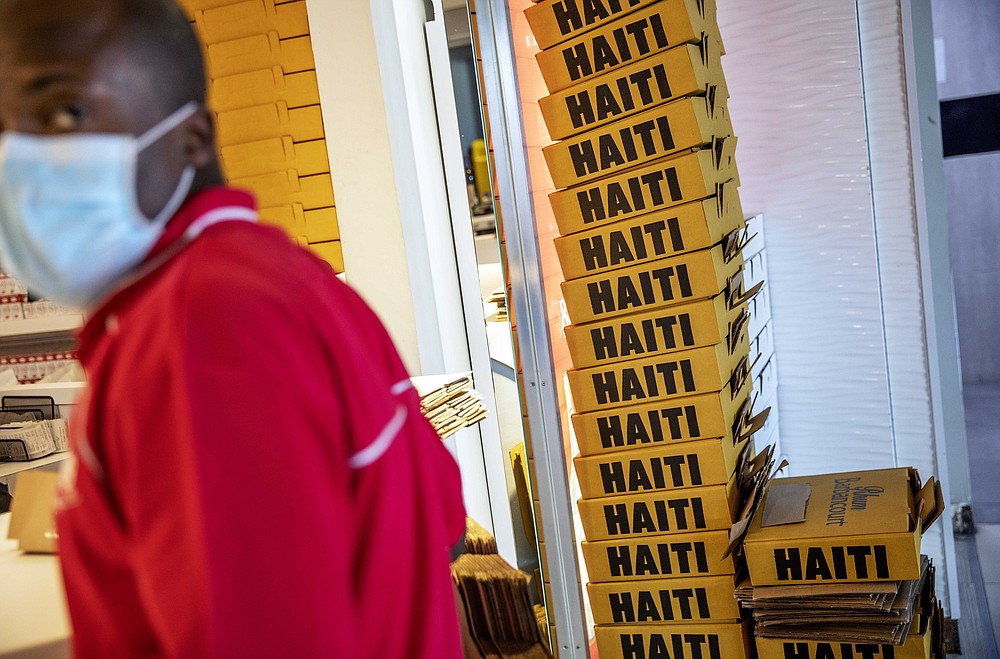 FILE - In this March 14, 2020 file photo, boxes of rum are stacked as a duty free employee wears a mask amid the COVID-19 pandemic while working at Toussaint Louverture International Airport in Port-au-Prince, Haiti. (AP Photo/David Goldman, File) 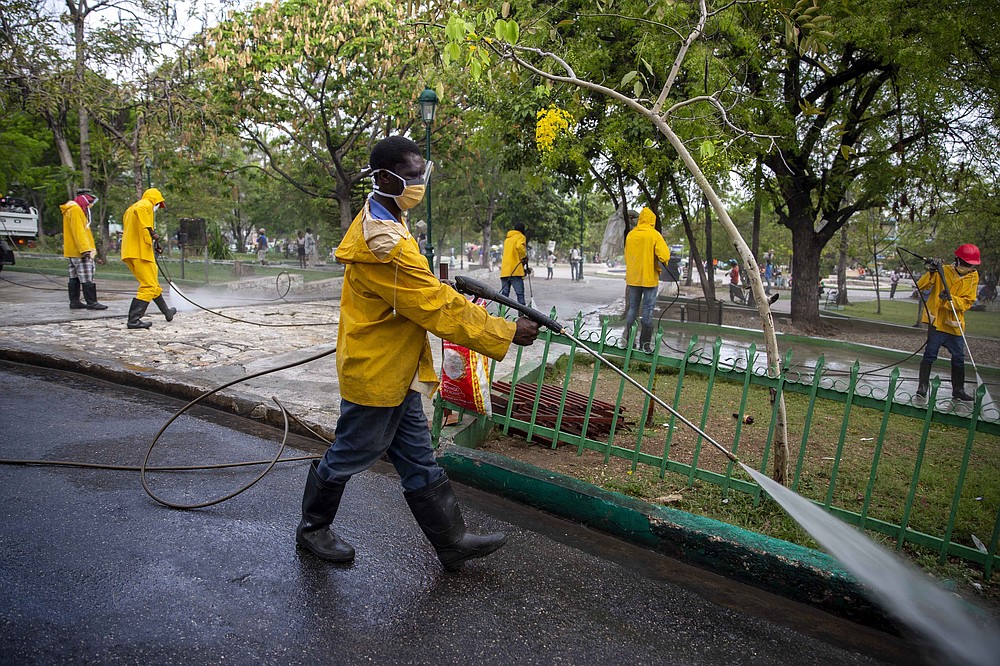 FILE - In this April 7, 2020 file photo, City Hall workers spray disinfectant in the street and a park in Petion-Ville, Haiti. To help contain the spread of the new coronavirus, the mayor of Petion-Ville announced public markets would reduce their operation to three days a week, public transportation would limit passengers to eight per muni-bus and Tap-tap buses, and passengers would be required to wear face masks. (AP Photo/Dieu Nalio Chery, File) 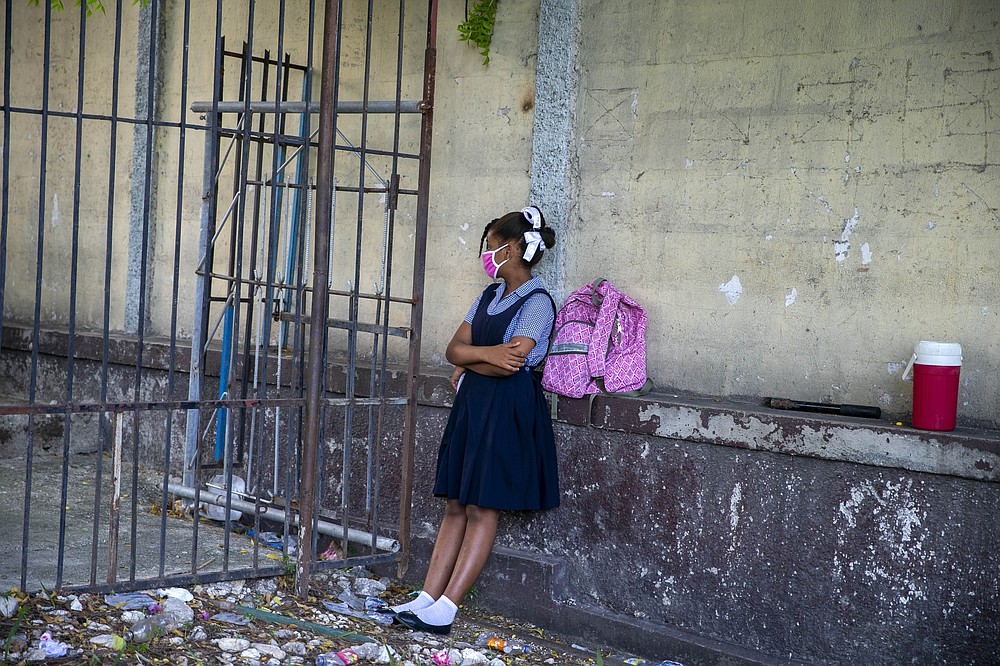 FILE - In this Aug. 17, 2020 file photo, a student waits for her turn to enter the Lycee Marie Jeanne school on the first day back to school since the COVID-19 pandemic in Port-au-Prince, Haiti. After five months of lockdown, schools officially reopened, requiring students to wear masks and dividing students into smaller groups with different schedules. (AP Photo/Dieu Nalio Chery, File) 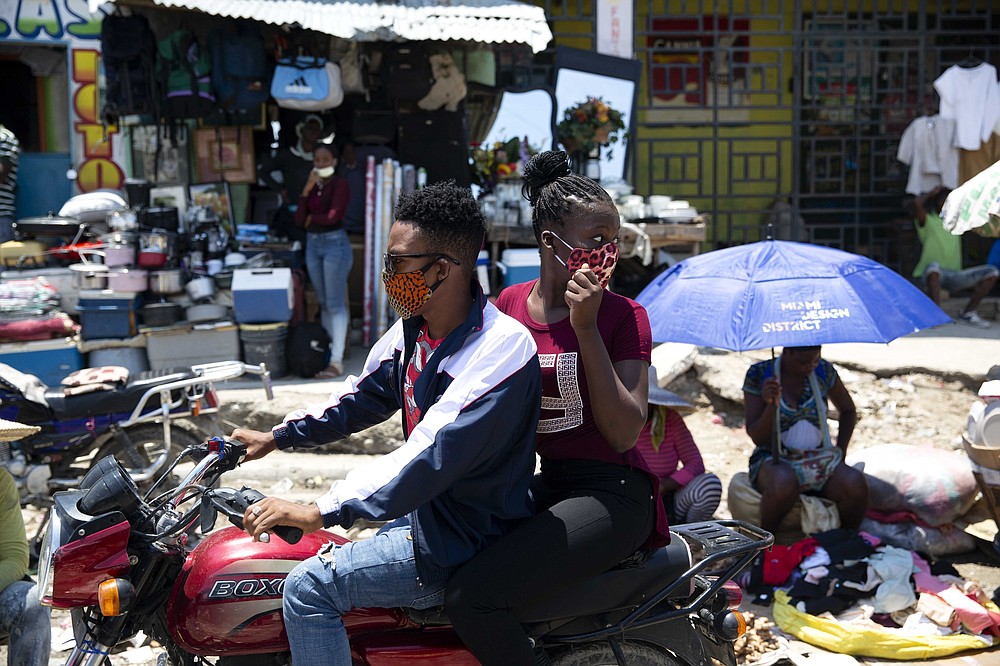 FILE - In this April 15, 2020 file photo, people ride on a motorcycle as they wear face masks to protect themselves from the spread of the new coronavirus in Port-au-Prince, Haiti. (AP Photo/Dieu Nalio Chery) 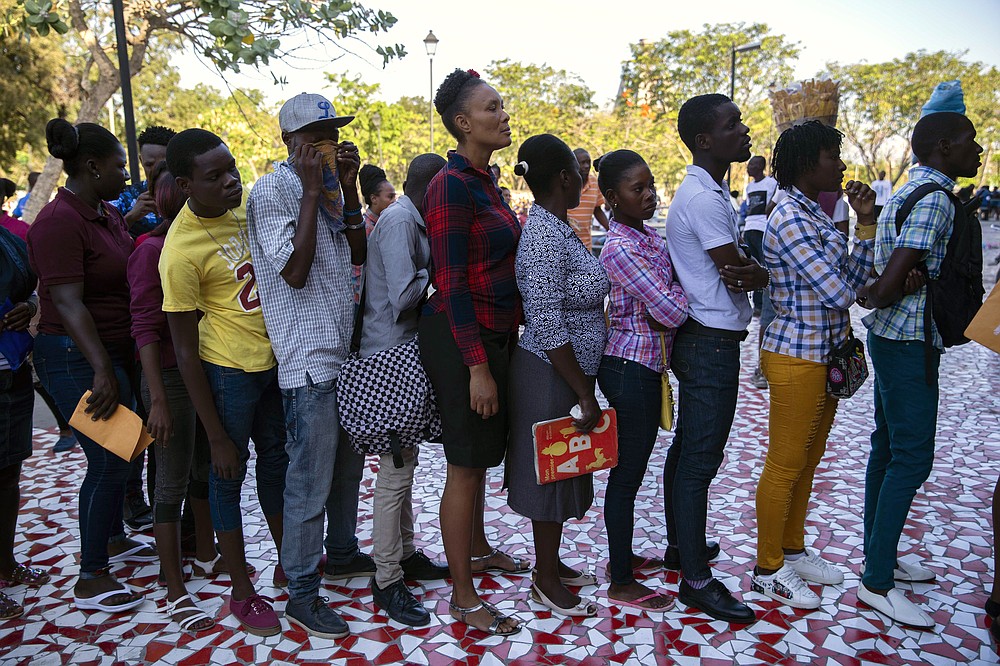 FILE - In this March 24, 2020 file photo, people line up at a government office for national identification cards before it potentially closes amid measures to contain the spread of the new coronavirus in Port-au-Prince, Haiti. (AP Photo/Dieu Nalio Chery, File) 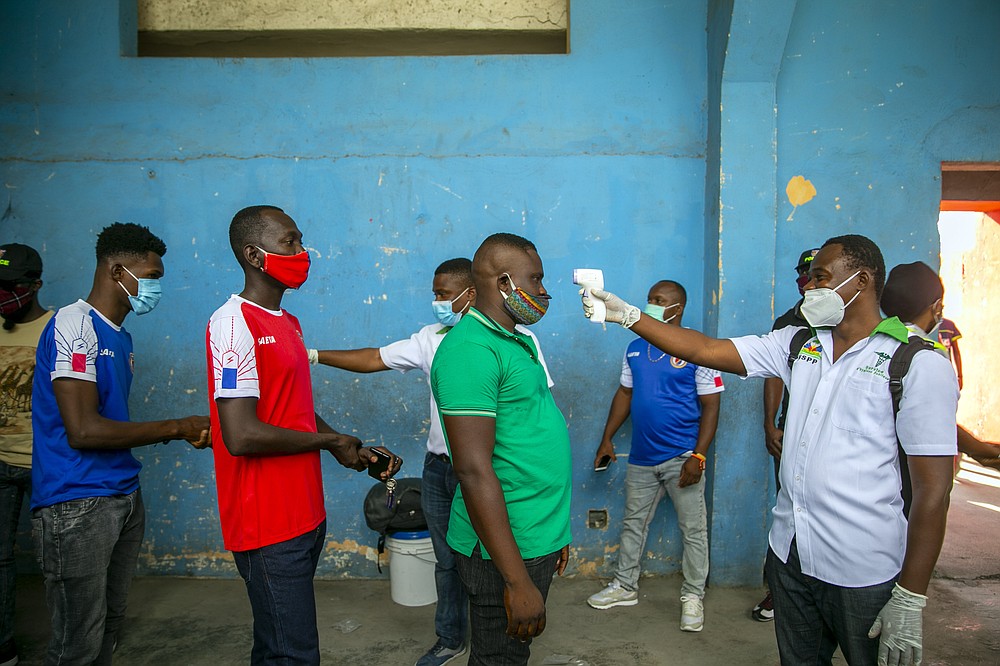 Health ministry workers check the temperature of mask-wearing fans as a precaution against the spread of the new coronavirus, before entering the stadium prior to the start of the CONCACAF World Cup qualifying soccer match between Haiti and Belize in Port-au-prince, Haiti, Thursday, March 25, 2021. ( AP Photo/Dieu Nalio Chery) 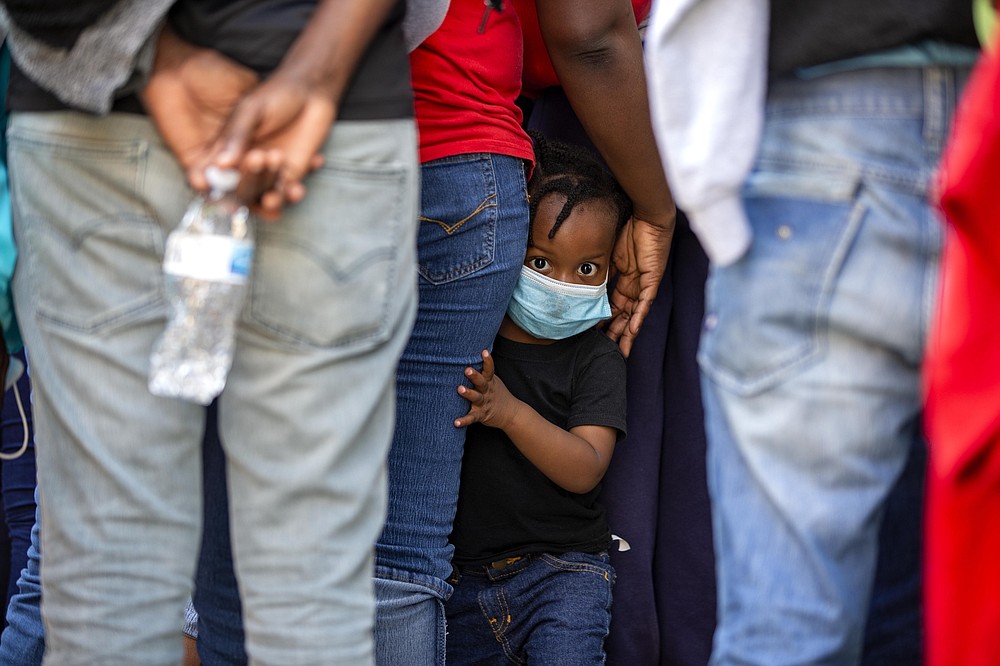 FILE - In this April 23, 2020 file photo, a child looks at the camera as Haitians who were deported from the U.S. line up as they arrive at a hotel where they will be quarantined as a measure against the spread of the new coronavirus in Tabarre, Haiti. (AP Photo/Dieu Nalio Chery, File) 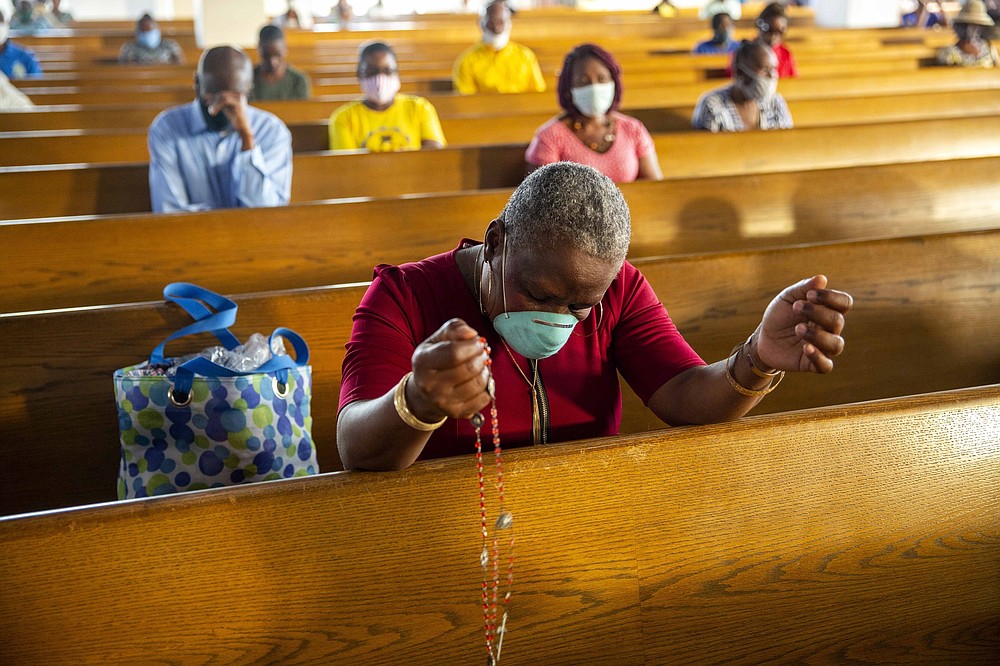 FILE - In this July 12, 2020 file photo, a woman prays during a Mass marking the reopening of places of worship at the Cathedral in Port-au-Prince, Haiti. Churches reopened after having been closed for months due to social distancing rules to curb the spread of the new coronavirus. (AP Photo/Dieu Nalio Chery, File)
ADVERTISEMENT