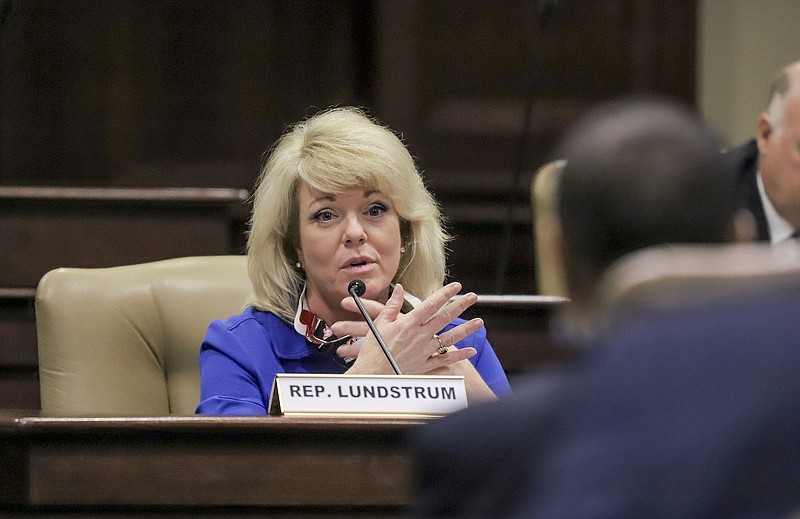 The Arkansas Legislature has overturned Gov. Asa Hutchinson's veto of a ban on gender-affirming care for transgender youth, with a majority of both chambers voting to override in largely party-line votes Tuesday afternoon.

Sen. Clarke Tucker, D-Little Rock, said he was concerned about the most powerful people bullying the most vulnerable. Sen. Terry Rice, R-Waldron, moved for immediate consideration of the motion to override, to "protect children."

Barring legal action, the law will take effect during the summer.

The Arkansas House on Tuesday voted 72-25 to override Gov. Asa Hutchinson’s veto of a bill to ban gender-affirming treatment for transgender youth.

House Bill 1570 by Rep. Robin Lundstrum, R-Elm Springs, bans certain surgeries and hormone treatments for people under 18. Hutchinson announced his veto of the bill Monday, saying it constitutes a legislative overreach into the relationship between doctors and patients and their families.

Lundstrum said the state steps in to protect the health and safety of youth in other instances, like requiring new parents to have a child seat in their car before leaving the hospital and prohibiting minors from smoking and getting tattoos.

Experts in gender-diverse care, both in the state and nationally, have said concerns proponents of the bill have expressed about hormone treatment are rooted in misinformation, and that those treatments are best practice. The surgeries targeted by the bill are not performed on children in Arkansas.

“Even medicine sometimes is wrong. We should never experiment on children. Ever,” Lundstrum said.

House Minority Leader Tippi McCullough, D-Little Rock, said if legislators had conversations to transgender youth and experts in their care, as Hutchinson said he did, they would have come to the same conclusion he did.

“Put aside everything and to search your own heart and think about these parents and these children and their doctors,” McCullough said.

A simple majority in both chambers overrides the veto. The House’s vote was mostly along party lines. The measure now heads to the Senate.