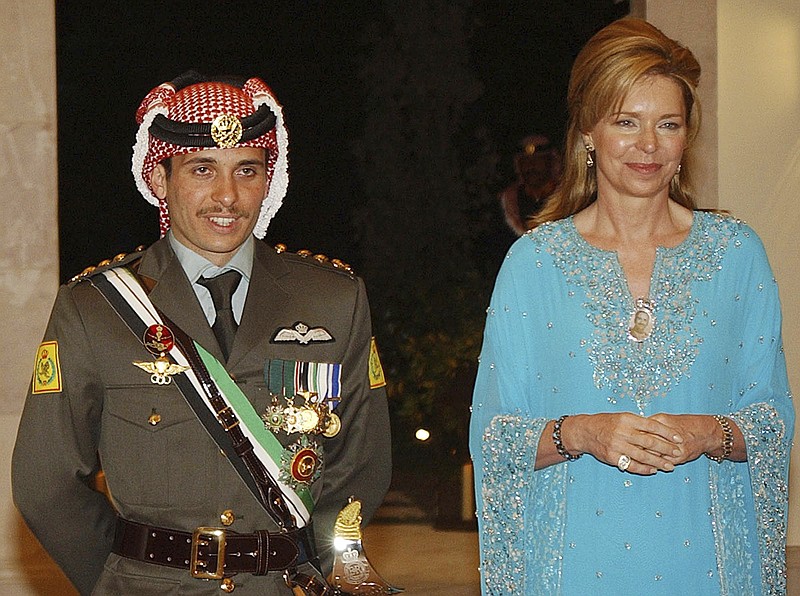 CORRECTS NAME TO PRINCE HAMZAH -- FILE - In this May 27, 2004 file photo, Jordan's Prince Hamzah left, with his mother Queen Noor, stands during his wedding ceremony in Amman, Jordan. Prince Hamzah, the half-brother of Jordan's King Abdullah II, said he has been placed under house arrest in a videotaped statement late Saturday, April 3, 2021. (AP Photo/Hussein Malla, File)

BEIRUT -- Mediation between Jordan's King Abdullah II and his outspoken half brother, Prince Hamzah, deescalated one of the most serious political crises in the kingdom in decades, the palace and a confidant of the prince said Monday.

The apparent resolution of the public feud capped a weekend of palace drama during which the king had placed Hamzah under house arrest over allegations that he plotted with foreign supporters to destabilize Jordan, a key Western ally.

Jordanian authorities had accused the former crown prince, along with two senior Jordanian officials, of being involved in a "malicious plot." Hamzah, 41, denied the allegations, saying he was speaking out against corruption and mismanagement.

The announcement of the successful mediation came after Abdullah's paternal uncle, Hassan, met with Hamzah on Monday.

The mediation took place at Hassan's home at the Royal Hashemite Court. Hamzah was joined by his brother Hashem and three of their cousins.

"In light of the developments of the past two days, I put myself at the disposal of His Majesty the King," said a statement signed by Hamzah. He said he would remain loyal to the king and to Jordan's constitution.

Shortly before the letter with Hamzah's signature had been released, the royal court put out a statement saying he had agreed that the royal Hashemite family's differences would be addressed through Hassan's mediation.

Malik Dahlan, a professional mediator and a friend of the family, then issued a separate statement, saying the mediation had "been successful and I expect a resolution shortly." Dahlan is principal of the Institution Quraysh for Law & Policy, a think tank.

He said that "this regrettable incident was the result of the clumsy actions of a senior security official and misrepresentation by a government official," adding that "it should have remained a family matter."

This was an apparent reference to Saturday's events, when Jordan's army chief visited Hamzah and -- according to the prince's description -- imposed restrictions on his movement and ability to communicate with the outside world.

Earlier Monday, it appeared tensions were still running high in the kingdom, which is valued by the West as a stable ally in a volatile region. A recording circulated online in which Hamzah said he would not take orders from the army chief.

"The army chief of staff came to me and issued threats in the name of heads of security agencies," Hamzah said in the recording. "I recorded his comments and distributed them to my acquaintances abroad as well as my family in case something happens."

"I don't want to escalate now, but of course I will not abide when he tells me, 'You are not allowed to go out, tweet or connect with people, and you are only allowed to see family members,'" he said. "When an army chief of staff says that, this is something that I think is unacceptable."

Jordan's army chief of staff, Gen. Yousef Huneiti, said Monday that the country's armed forces and security agencies "have the power and experience" to deal with any developments that might happen internally or in the region.

He made his comments while taking part in "Shield of the Nation," a drill that included several brigades, special forces, border guards and the Royal Air Force in the eastern region of the kingdom, the state news agency Petra said. The exercise did not appear to be related to the weekend incidents because such drills are planned well in advance.

Huneiti said the troops will confront anyone who "tries to endanger the nation's security, terrify its citizens and threatens the security and stability of the kingdom."

Foreign Minister Ayman Safadi said Sunday that the prince had recorded conversations and passed them to foreign sources. He did not provide specifics on the alleged plot or say what other countries were purportedly involved. But he said 14-16 associates of Hamzah had been arrested.

Among those arrested were Sharif Hasan, a member of the royal family; Bassem Awadallah, a former senior official in the royal court and special Jordanian representative to the Saudi government; Yasser Majali, the head of Hamzah's office; Sheikh Sameer Majali; and several others who served in prominent positions in the government and military.

Safadi said officials who had been detained had been under extensive surveillance and were known to have ties to foreign entities. He said the prince had been contacted by a foreign source who had offered him services, including the use of a private plane for his wife and children to flee Jordan.

On Sunday night, Ammon, a news site with ties to the Jordanian intelligence community, reported that Israeli businessman Roy Shaposhnik, whom it identified as a former member of Israel's Mossad intelligence agency, had offered the plane.

Several hours later, Shaposhnik, in a statement posted on Facebook, denied having worked for the Mossad but said that he was a close friend of Hamzah.

Safadi said Sunday that Hamzah had liaised with Awadallah throughout the course of the day Saturday, accusing him of "incitement and efforts to mobilize citizens against the state in a manner that threatens national security."

He said the government had intercepted communications between the prince and Awadallah.

Hamzah fired back, defending himself in videos released Saturday.

He denied involvement in any plot against Abdullah, although he did condemn the government as corrupt, incompetent and authoritarian.

"I am not responsible for the lack of faith people have in their institutions," he said in one of the videos obtained by The New York Times.

U.N. spokesman Stephane Dujarric noted Jordan's "vital role in the Middle East, and its peace and security and the stability of the country is critically important."

The only Israeli response came from Defense Minister Benny Gantz, who called the situation an "internal" issue.

Domestically, Hamzah's unprecedented criticism of the ruling class -- without naming the king -- could lend support to growing complaints about poor governance and human-rights abuses in Jordan.

Jordan is under a strict nightly coronavirus-related curfew that is set to last until mid-May. It has been hit hard economically by the pandemic and by the waves of refugees who have arrived from neighboring Syria.

The country's health minister resigned last month after seven people died of covid-19 amid a shortage of oxygen supplies at government hospitals.

The following day, protesters defied the curfew and took to the streets, calling for the government to resign and chanting for Hamzah to save the country.

Abdullah and Hamzah are both sons of King Hussein, who remains a beloved figure two decades after his death. Upon ascending to the throne in 1999, Abdullah named Hamzah as crown prince, only to revoke the title five years later. Hassan, the uncle, also had been crown prince but was removed shortly before Hussein's death.

While Abdullah and Hamzah are said to have good relations generally, Hamzah has at times spoken out against government policies and more recently had forged ties with powerful tribal leaders in a move seen as a threat to the king.

Information for this article was contributed by Bassem Mroue, Sarah El Deeb, Joseph Krauss and Edith M. Lederer of The Associated Press; by Shira Rubin and Sarah Dadouch of The Washington Post; and by Marc Santora of The New York Times. 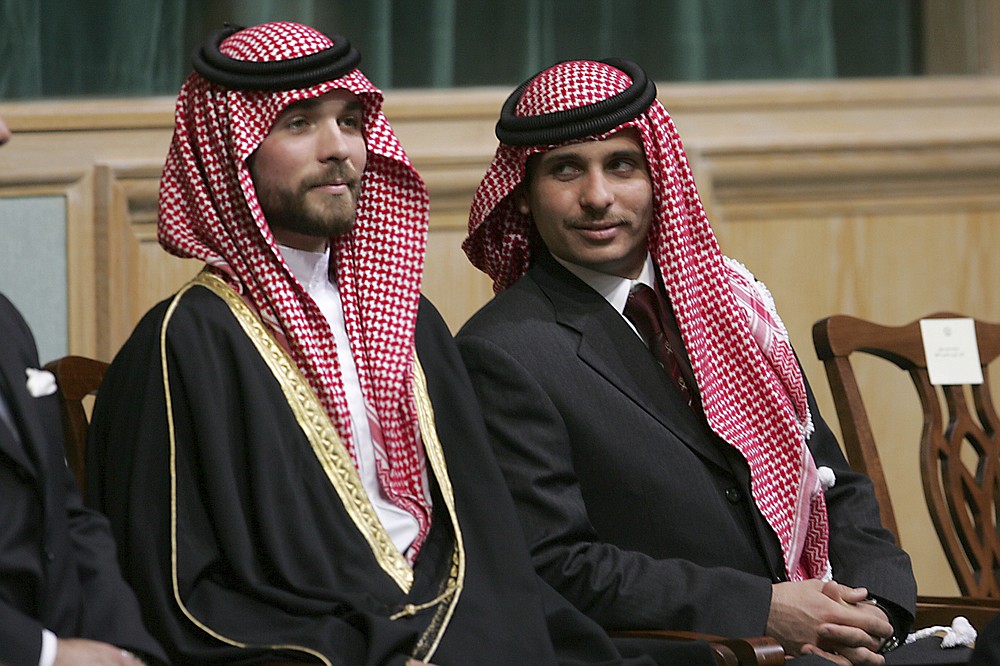 FILE - In this Nov. 28, 2006, file photo, Prince Hamzah Bin Al-Hussein, right, and Prince Hashem Bin Al-Hussein, left, half brothers of King Abdullah II of Jordan, attend the opening of the parliament in Amman, Jordan. Prince Hamzah said in a recording released Monday, April 5, 2021, that he will defy government threats ordering him to stay at home and refrain from public statements following accusations he was behind a plot to destabilize the kingdom. (AP Photo/Mohammad abu Ghosh, File) 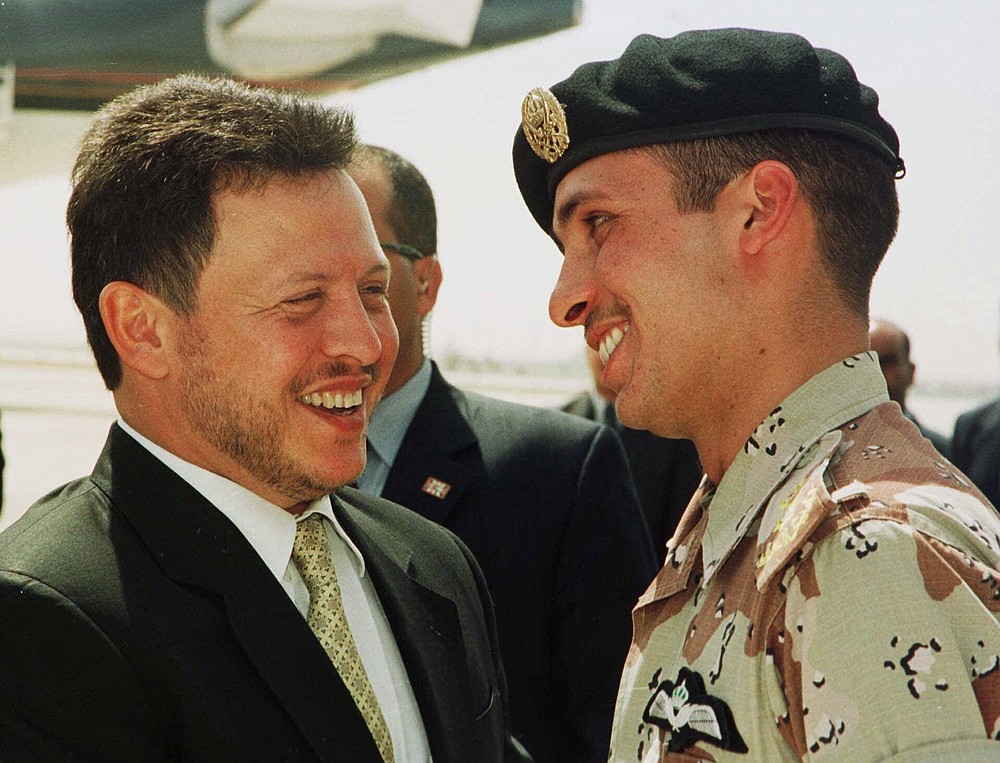 FILE - In this April 2, 2001, file photo, Jordan’s King Abdullah II laughs with his half brother Prince Hamzah, right, shortly before the monarch embarked on a tour of the United States. Prince Hamzah said in a recording released Monday, April 5, that he will defy government threats ordering him to stay at home and refrain from public statements following accusations he was behind a plot to destabilize the kingdom. (AP Photo/Yousef Allan, File)
ADVERTISEMENT