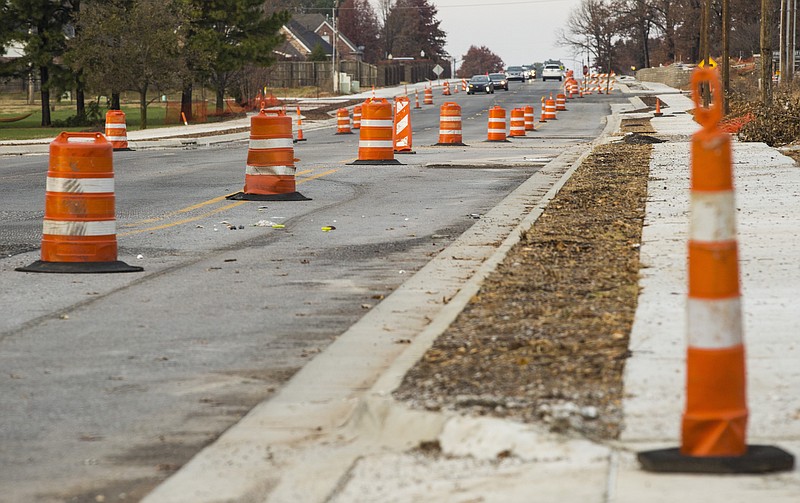 Orange barrels line the roads as often as not here in our corner of the state. The new road projects are mostly extensions or lane additions. But a select few are actually shrinking the space we offer to cars.

Why? The reasons are numerous. Overly wide roads, usually built decades ago, are proving to be inefficient, unsafe for drivers and treacherous for anyone brave or desperate enough to walk them.

So what do we do when there's just too much pavement? Often, the Federal Highway Administration or professional planners prescribe what's known as a road diet.

A classic road diet converts an undivided four-lane road into a three-lane street with a center turning lane. It converts the remaining space into on-street parking or makes room for bikes and pedestrians.

Road diets slash those crashes. Every study by the Federal Highway Administration saw crashes reduced by anywhere from 19 to 47%. Speeding also plummets as prudent drivers now set the pace for everyone on the road. Yet, surprisingly, travel times on roads typically go down. This is counter intuitive I know. These slimmer roads get those left turners out of the through lanes and allow for smarter signal timing so people get where they are going sooner.

These four-lane roads often lack parallel parking, bike lanes or useful sidewalks. Businesses set at the back of large parking lots have trouble attracting passers-by as customers. The faster cars move, the less they tend to stop at small businesses.

Old Highway 71, once the only north-south trucking route through Fayetteville, has been supplanted by I-49. Plans to place the old highway on a road diet are underway as it now runs through some of the most valuable real estate in the state. In up and coming neighborhoods, most people would rather have a calm street than a major highway beside their homes or businesses.

Road diets can also be as simple as painting narrower lanes when a road is repaved. Highway lanes are normally at least 12 feet wide. Making lanes 1 or 2 feet narrower can slow drivers and free up much-needed buffer space for people walking or riding bikes.

Johnson Mill Boulevard is another local example that received a road diet treatment. The overhaul emphasized safety and overall livability, narrowing lanes, adding parking and cutting the speed limit from 40 to 25 mph. Profit-motivated commercial and residential developers teamed up with safety advocates to make the changes last year.

The counterargument always comes: "But roads are for cars."

We can make our roads safer for everyone. Ask your car if it minds the change. I promise it won't put up a peep in protest.

Dane Eifling is the city of Fayetteville's mobility coordinator.