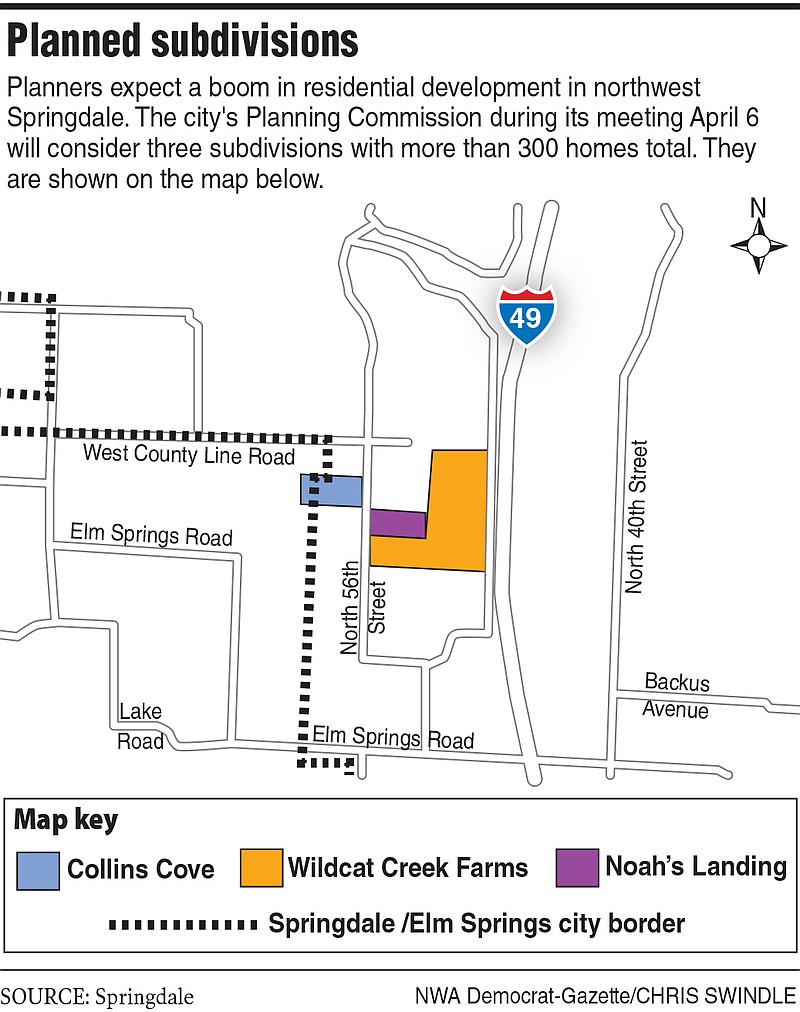 SPRINGDALE -- All of Springdale will benefit when nearly 550 single-family homes are built in the city's northwest quadrant, local leaders said.

Property taxes will improve the school system. Sales taxes paid by new residents will help build roads and other amenities.

"If people are living there, they're going to spend money there, which will help the business owners," said Jeff Cooperstein, a senior research assistant for the Center for Economic and Business Research at the University of Arkansas.

The Planning Commission today will consider two subdivisions, another is in the works and one is under construction. The four plans represent 546 houses, said Austin Thomas, assistant director of the city Planning Department.

Collin's Cove on the west side of North 56th Street, south of West County Line Road, will have 57 houses, Thomas reported. Noah's Landing across the street on the east side of 56th will have 54 houses. Wildcat Creek Farms -- expected for approval at the May meeting of the Planning Commission -- will surround Noah's Landing on the east and south with 255 residences.

Cottages at the Park, developed by Tim Boudrey of Landmarc Custom Homes, will include 180 cottages when three phases of construction are complete. He said the 1,800- to 2,800-square-foot houses are selling for about $300,000.

The northwest area of town is bordered by U.S. 412 on the south, Interstate 49 to the east, the new Interstate 612 to the north and Arkansas 112 to the west.

City officials for several years have talked about seeing rooftops in that area and infrastructure to meet the demand. Road improvements, a fire station and the 120-acre Shaw Family Park were completed under the city's $200 million bond program approved by voters in 2018.

"Development takes time," said Bill Rogers, president of the Springdale Chamber of Commerce. "Everybody wants it to happen a hurry. But good development like this is the kind that lasts."

The boom comes in conjunction with similar building activity in the region's other cities, planners say.

"They've got to go somewhere," he said.

Three Fortune 500 companies in Northwest Arkansas draw employees by the thousands to the region.

Tim Conklin, assistant director of regional planning, said the companies set their headquarters where they are for a reason: access to Interstate 49, which then provides access to all of Northwest Arkansas.

People can choose to live in one town and commute to others for work, shopping and entertainment.

Walmart's new corporate office in Bentonville will line Southeast J Street, within a few miles of the interstate. Tyson's offices front Don Tyson Parkway, not far from where the city built an interchange. The headquarters of J.B. Hunt overlook the interstate near the 612 bypass.

Cooperstein said the northwest sector provides quick access for people working in the medical facilities near Arvest Ballpark. The city has improved Gene George Boulevard that runs north and south through the area in anticipation of the growth.

Arvest Ballpark sat alone for years when, one by one, other developments joined the field -- Sam's Club, Arkansas Children's Northwest, Northwest Arkansas Community College, Cottages at the Trails, Highlands Oncology Center among them.

Hawkins said most people want to live near their jobs. He said a 2019 American Community Survey by the Census Bureau showed the national average for a one-way trip to work was 27.6 minutes. In Northwest Arkansas, the one-way drive is 15 to 20 minutes.

Logan Bond has lived with his family in the Legacy subdivision since 2017. He said they like the accessibility of the neighborhood, listing the Pinnacle Promenade in Rogers, Joyce Street and the Northwest Arkansas Mall in Fayetteville, Walmart Supercenter on Elm Springs Road and Arkansas Children's Northwest hospital in Springdale as easy drives.

Pasty Christie, city director of planning, also noted easier access to the Northwest Arkansas National Airport for those on the west side.

"Commercial and retail and everything that goes along with it come after the rooftops," Conklin said, listing schools and day care, medical clinics, discount stores, convenience stores, pharmacies, gas stations, restaurants and coffee shops. "And if you hit the jackpot, you get a Chick-fil-A," nodding to the Planning Commission's approval last month of plans for the restaurant west of the interstate.

GO WITH THE FLOW

The state Department of Transportation plans to extend the Interstate 612 bypass from Habberton Road to Tontitown and widen Arkansas 112.

The Springdale Water and Sewer Commission in 2018 completed a $12 million expansion of the city's sewer system in the area, said Heath Ward, the utilities' executive director. The 8.5 miles of pipe and two pumping stations can serve 10,000 to 15,000 households.

Development might be market-driven, but it's also driven by where there's water and sewer access, Conklin said.

"Springdale has been pretty aggressive in expanding their infrastructure," he said.

The city is primed for the growth.

Christie said growth will come mainly in the northwest and southeast parts of town. The western foothills of the Boston Mountains rise up on the northeast side, and the hilly, rocky terrain makes construction difficult, she said.

The southwestern quarter of the city is controlled by large landowners who will develop that area in their own time, she said.

"These are the things we know," she said.

Nancy and Lyndal Schisler decided to build a home near their son in the Camelot subdivision west of Shaw Park.

Lyndal Schisler said he appreciated the "out in the country" feel but proximity to amenities.

A drive through the area shows the place is not so country anymore.

Boudrey said he saw opportunity and bought 50 acres on South Downum Road two years ago, knowing the city was planning to build Shaw Park next door.

The neighborhood design includes trail access to the park. Landmark has 11 homes under construction at the Cottages on the Park subdivision, and seven of those have been sold, he said.