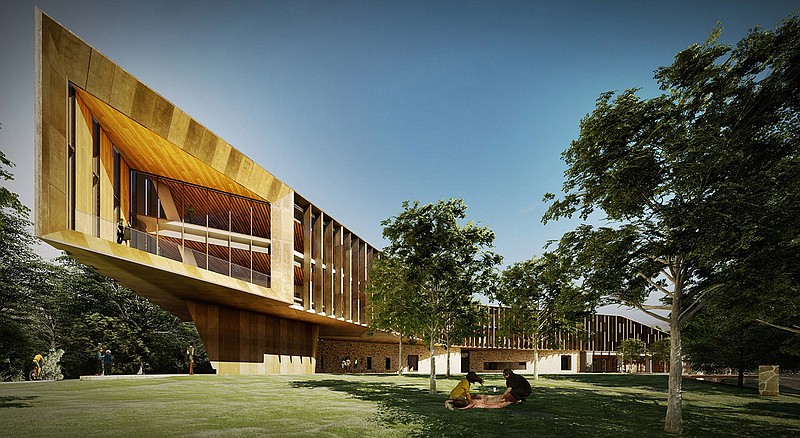 BENTONVILLE -- The Planning Commission is set to see details today for the Whole Health Institute, which Walmart heiress Alice Walton plans to build near the Crystal Bridges Museum of American Art.

Establishment of the Whole Health Institute was announced during the Northwest Arkansas Council's winter meeting at Crystal Bridges in January 2020, and city staff reviewed the institute's large-scale plan March 30.

The property is at 850 Museum Way, southeast of the museum, according to planning documents.

The 77,000-square-foot, multiuse office and community space designed by Marlon Blackwell Architects will break ground this spring with an estimated completion date of summer 2023.

Walton also announced plans in March to build an independent, nonprofit medical school in Bentonville. Construction of the Whole Health School of Medicine and Health Sciences is to start next year with plans to open in 2024, according to an announcement from the Whole Health Institute.

Dr. Tracy Gaudet, executive director of the institute, said Walton will pay to build the medical school. The cost hasn't yet been determined, and where in the city the school will be built hasn't been announced.

The institute will be on the museum's 120-acre grounds and will include space for interactive programs and convention space for up to 800 people, according to a news release in December.

The building will include access to the Chopra Library and offices for the institute and Art Bridges. Walton founded Art Bridges, which creates and supports programs to expand access to American art across the nation, according to the museum website.

Dr. Deepak Chopra, a philanthropist, doctor and longtime advocate of goal-oriented approaches to health, held his "Sages and Scientists 2019 Symposium" at Crystal Bridges.

"Crystal Bridges and Whole Health Institute are partner organizations with an aligned vision of enriching lives," Rod Bigelow, executive director of the museum, said in the release. "We are excited to welcome them to the neighborhood and look forward to exploring the intersection of art, nature and well-being through programs, conversations and collaborations."

The institute will be on the northwest side of a planned parking deck, according to the December release. The Planning Commission approved the parking deck in January.

Crystal Bridges and the Scott Family Amazeum will collaborate on the parking project.

Plans call for a 309,000-square-foot, 820-space parking facility, according to planning documents.

Work has started on the garage with an anticipated completion in fall 2022, Bobbitt said.

The parking project was announced in October. A play area called Convergence and a six-story parking deck with performance space will be built on 4 acres on the southeast side of Crystal Bridges' campus and the adjoining western edge of the Amazeum's property, venue representatives said in October.

There will be an access drive onto Northeast J Street and an additional access point onto Museum Way, according to planning documents.