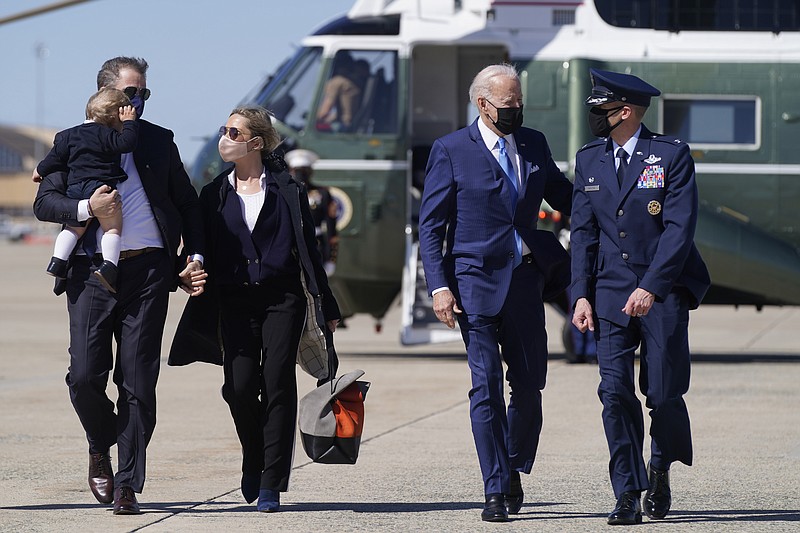 Hunter Biden fought an Arkansas paternity suit because he had no memory of the incident that led to the pregnancy, he said in a memoir released Tuesday.

In "Beautiful Things," the president's son describes his struggles as an alcoholic and a drug user, problems that grew worse, he writes, after the death of his older brother, Beau Biden, in May 2015 and after his own divorce, which was finalized in 2017.

Hunter Biden, who had already lost his mother and a sister in a 1972 car collision, portrayed his post-marital relationships as insubstantial.

Other than Beau Biden's widow, "the other women I'd been with during rampages since my divorce were hardly the dating type. We would satisfy our immediate needs and little else," he wrote, adding, "I'm not proud of it."

"It's why I would later challenge in court the woman from Arkansas who had a baby in 2018 and claimed the child was mine -- I had no recollection of our encounter. That's how little connection I had with anyone," he wrote. "I was a mess, but a mess I've taken responsibility for."

In the book, Hunter Biden describes crack cocaine binges on both coasts and stints at various places, ranging from a $59-per-night Super 8 on the East Coast to $300-per-night stays at the Petit Ermitage in West Hollywood, Calif.

Despite his drug problems, he continued to serve on the board of Burisma.

The Ukrainian gas company, with its "robust compensation," became "a major enabler during my steepest skid into addiction," Biden writes.

The father of five says his second wife, Melissa Cohen Biden, helped him get sober and start anew.

The couple married in May 2019. Later that month, Lunden Alexis Roberts filed suit in Independence County, alleging that Biden was the father of her child, referred to in court documents initially as "Baby Doe."

In the prologue, Biden says he began writing the book in November 2019. That's the same month he provided the DNA samples that helped establish his paternity.

In March 2020, days before his wife gave birth, Biden -- an attorney, artist and former lobbyist -- settled the lawsuit for an undisclosed sum.

"He has only taken financial responsibility when the court forced him to do it," Lancaster said.

While Biden is up to date on his child support payments, he has had no interaction with his Arkansas-born daughter, now referred to in court documents as NJR.

"He's not seen his child. He has no relationship with his child, by his own choosing," Lancaster said. "Mr. Biden hasn't taken responsibility for this child until he parents her."

President Joe Biden and his wife, Jill, have not seen the baby either, Lancaster said.

Roberts, originally from Batesville, played on the Arkansas State University women's basketball team and graduated from the school in 2014 with a bachelor's degree in interdisciplinary studies.

Afterward, she took classes at George Washington University. While living in the Washington area, she met Hunter Biden, Lancaster said.

For a time, Roberts worked for Biden and accompanied him on trips, Lancaster said.

"She stayed in hotels, some of the nicest hotels around, with Hunter Biden, traveling with him more than once," Lancaster said.

Biden was aware of the pregnancy and knew that Roberts would be moving back to Arkansas, Lancaster added.

"Obviously, my client is insulted by Mr. Biden's characterization of her, but she can't control that," he said.

People in Batesville can vouch for Roberts, he said.

"She's from a very well-respected, well-known family, and she's successful in her own right," he said.

"She is the spitting image of her father," he added.