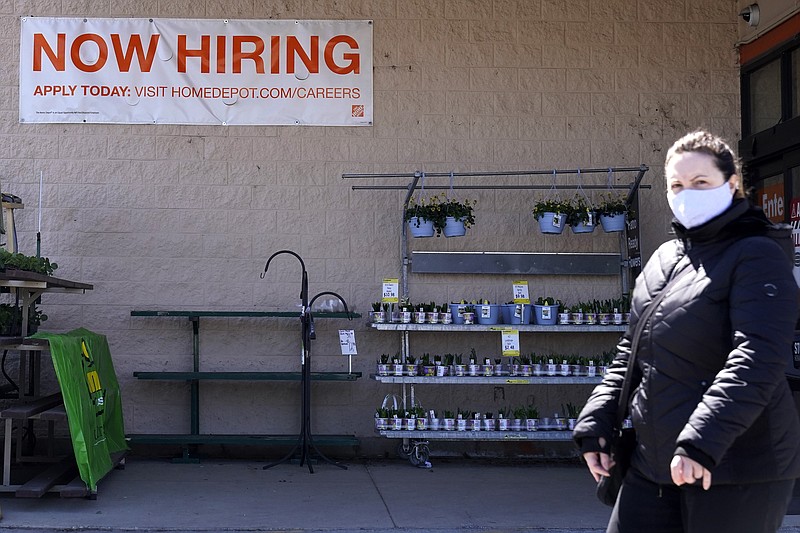 A hiring sign is seen outside home improvement store in Mount Prospect, Ill., Friday, April 2, 2021. The pace of job openings reached the highest level on record in February, a harbinger of healthy hiring and a hopeful sign for those looking for work. (AP Photo/Nam Y. Huh)

WASHINGTON -- The pace of job openings reached the highest level on record in February, a harbinger of healthy hiring and a hopeful sign for those looking for work.

The job openings rate -- which is the number of available jobs as a percentage of the employed plus the open jobs -- rose to 4.9%, the highest since the data was first tracked in December 2000, the Labor Department said Tuesday.

The increase reflects a solid rise in open jobs to 7.4 million, up from 7.1 million in January and significantly above the pre-pandemic level of about 7 million. Total hires rose to 5.7 million, though that is below the figure in February 2020, just before the coronavirus intensified.

The data comes from the Job Openings and Labor Turnover survey, which reports the number of job listings, total hiring, and layoffs and quits. The hiring figures represent a gross figure, while the monthly jobs report provides a net number of jobs gained or lost.

Still, the job market is far from healed. Including those who have lost jobs and stopped looking for work, as well as misclassification of some unemployed, the unemployment rate would be roughly 9%.

And there are still 9.7 million people counted as unemployed, or about 1.3 people out of work for each job opening.

But the jump in available jobs suggests hiring may continue at the robust levels seen in March.

In Tuesday's report, the number of people who voluntarily left a job was little changed as the quits rate held at 2.3%. Separations, which include both layoffs and quits, increased to 5.5 million from 5.3 million. That figure is still lower than levels seen in December.

By region, openings climbed roughly 100,000 in both the Northeast and South. The Midwest and West posted more moderate gains.

The biggest gain, according to the report Tuesday, was in health care, which posted 230,000 more job openings than the previous month. The beleaguered leisure and hospitality sector, which includes restaurants, hotels, bars, amusement parks and casinos, also posted a healthy increase of 160,000 job openings.

"Help wanted" signs have become fixtures at restaurants struggling to find, hire and retain workers during the pandemic.

Restaurant owners and managers in Little Rock said they have been understaffed for months.

"I've seen one applicant walk in in the past four months," said Gary Dillon, a manager and bartender at The Faded Rose Restaurant.

He and others attributed the problem to increased unemployment benefits available to workers who were laid off because of the pandemic.

"They make more money staying at home and it hit the whole industry hard," said Jeffery Williams, a general manager at Soul Fish Cafe. "Some [restaurants] can't open because they don't have enough employees."

Williams said quality workers are sought after like never before and can likely pick a place and name a price to work. "It's like the pandemic ate all the servers and line cooks," he said.

Baja Grill recently adjusted its hours to close on Mondays because of staffing levels. After posting ads on social media and getting media attention, Heather Baber-Roe, owner of Baja Grill, said she got a lot of applications for dishwashers and hosts and is hoping more come in for servers and kitchen staff.

On Florida's Captiva Island, Doug Babcock is considering hiring a temporary labor firm to fill roles at 'Tween Waters Island Resort and Spa and other resorts on neighboring Sanibel Island. Historically, workers have willingly driven up to an hour from the mainland for the promise of year-round work. This year, applicants are grilling him about drive times and taking jobs closer to home.

"It's almost like the staff is interviewing you," said Babcock, who's boosted starting pay for dishwashers by $2 to $3 recently.

Economic data is rebounding better than expected because of a "superfecta" of positives colliding at once, Michael Skordeles, a senior U.S. macro strategist at Truist Financial Corp., said in an April 2 note.

"The resulting horsepower lifting the economy is unparalleled, particularly for jobs in the coming months," he wrote.

Even before states like Texas and Mississippi reopened last month, job openings were surging -- hitting a two-year high in February, Tuesday's report showed.

"I think we're getting to another phase in the reopening and that's leading to a spurt in economic activity," said Ryan Sweet, head of monetary policy research at Moody's Analytics Inc. And while economic data can sometimes send mixed signals, "this time around, we're getting strong signals that the economy is set to bounce back," he said.

To get ahead of the competition for talent, Olive Garden parent Darden Restaurants Inc. is raising pay to ensure all workers, tipped and untipped, earn at least $10 an hour initially and $12 by January 2023.

Many Applebee's restaurants are offering $3,000 bounties for manager referrals after the first six months, while some Arby's locations are paying $500 referral bonuses up front.

"Our restaurants are literally busier than they've been in decades," said Greg Flynn, whose Flynn Restaurant Group owns 2,355 restaurants including Applebee's, Panera Bread, Taco Bell and other brands.

The worker shortage is especially apparent at Southern restaurants and hotels that have seen a spring-break surge of activity in states that reopened earlier than most, on top of a wave of spending from the $1,400 federal stimulus payments that Congress passed in March.

In Southern states including Alabama, South Carolina and Florida, growth in consumer spending since January 2020 far exceeds the national average, according to data from Opportunity Insights.

"Never have we ever had this many positions open," said Francesco Balli, co-founder and co-chief executive of Grove Bay Hospitality Group that owns eight restaurants in the Miami area.

Before the pandemic the company employed about 500 people, but that workforce shrank during shutdowns last year. Now with about 280 on staff, it isn't enough, Balli said.

Hoteliers are in an especially rough spot right now, with a flood of leisure travelers booking rooms on weekends and almost no business travelers during the week, said Tim McPherson, whose Hospitality Staffing Solutions employs more than 10,000 workers around the country.

Hotels have raised their pay by around 15% over pre-pandemic rates, McPherson said, while sign-on bonuses or bonuses for finishing a three-month assignment are catching on. In Nashville, staffing agencies like his have brought in workers from Minnesota temporarily to fill the need, McPherson said.

For now, a poolside bar at the SpringHill Suites in Navarre Beach, Fla., is closed until the hotel can find enough workers to staff it. Cooks, who earn $13 to $17 an hour, are especially needed, said General Manager Scott Mauer.

"I feel like this is all going to go away," Mauer said. "At some point, people will want to start looking for jobs again."

Information for this article was contributed by Christopher Rugaber of The Associated Press; by Michael Sasso, Leslie Patton and Reade Pickert of Bloomberg News (WPNS-TNS); and by Nathan Owens of the Democrat-Gazette.