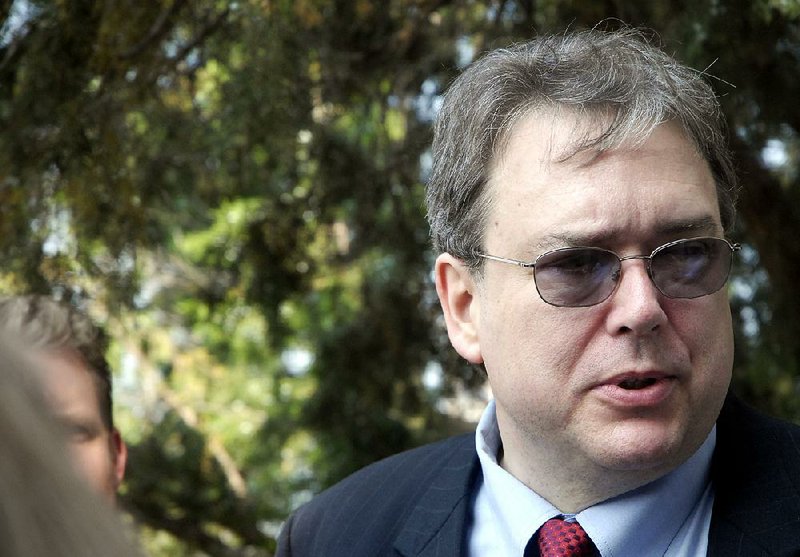 Judge Chip Welch is shown in this file photo.

The Arkansas Department of Transportation should be held in contempt of court for not providing proof it has reimbursed $121 million illegally spent on two highway projects, including 30 Crossing, lawyers for a group of taxpayers said in Pulaski County Circuit Court filings this week.

They also sought an order from Pulaski County Judge Chip Welch that the department deposit the $121 million in the court's treasury until the department provides a full accounting of the reimbursement sources that can be reviewed by a special master.

"This process will ensure defendants' compliance with the Court's order while protecting taxpayers 'ultimate guarantee of recourse to the courts'" under Article 16, Section 13 of the Arkansas Constitution. It reads: "Any citizen of any county, city or town may institute suit, in behalf of himself and all others interested, to protect the inhabitants thereof against the enforcement of any illegal exactions whatever."

The motion and accompanying pleadings and exhibits came after the two sides clashed in court pleadings over the attorneys fees the plaintiff's attorneys are seeking -- at least $4.8 million.

The plaintiffs attorneys, led by Joe Denton and Justin Zachary, did not say how much they were seeking, "only a reasonable contingency fee," a percentage based on the $121 million, but cited a 1990 Arkansas Supreme Court case that suggested an attorneys' fee award of 4% "of the net balance ... is appropriate here," or about $4.8 million.

Lawyers for the defendants -- Assistant Attorney General Vincent P. France and Rita Looney, the Transportation's chief counsel -- said in response that under state law attorney fees are available in illegal exaction cases only involving a city or a town or when a refund is ordered to taxpayers.

They also said the sovereign immunity clause in the state constitution bars the awarding of attorneys' fees against the state.

Further, they said even if the fees were permitted, the request was "ridiculously excessive."

The legal wrangling came in a lawsuit involving Amendment 91 to the state constitution, which voters approved in 2012 to help pay for the department's $1.8 billion Connecting Arkansas Program, which focused on improving about 200 miles of state highways in regionally significant corridors.

The program was financed by a half-percent statewide sales tax that Arkansas began collecting in 2013. It is scheduled to expire in 2023.

In November 2018, Shelly Buonaiuto of Fayetteville led a group of Arkansas residents who sued the department, its director, the Arkansas Highway Commission and other state officials, contending a "plain reading" of Amendment 91 clearly limited spending on projects no wider than four lanes.

But 30 Crossing and another project on Interstate 630 were being widened to 10 lanes and eight lanes, respectively, under the program.

The 30 Crossing project is an extensive effort to improve the I-30 corridor through downtown Little Rock and North Little Rock, including replacing the bridge over the Arkansas River. Work on the first phase began in September. The two phases are estimated to cost a collective $1 billion.

Welch agreed with the department in a 2019 decision that repeated references to four-lane roads in the amendment were shorthand for the agency's so-called four-lane grid system of high-priority roads, which included six-lane roads.

But the state Supreme Court disagreed. Its 6-1 decision said that because of the wording in Amendment 91, all of the money for the projects in question will have to come from sources other than the sales tax.

The Arkansas Department of Transportation has identified five projects it would use to reimburse its Amendment 91 account a total of $121.1 million that the state Supreme Court said the agency illegally spent on two other projects.

Welch has given the department 60 days to reimburse the account.

The department already has reimbursed the account $62.2 million, according to documents submitted in a case before Welch.

At issue was $183.3 million for projects to improve the Interstate 30 corridor through downtown Little Rock and North Little Rock, also called 30 Crossing, and to widen a section of Interstate 630 in west Little Rock.

The plaintiff attorneys took a deposition from a top Transportation Department official, Jared Wiley, who testified, among other things, that the eight projects the agency selected to divert state funds to reimburse Amendment 91 fund had already been completed.

"As such, it appears that Defendants' 'plan' to reimburse the Amendment 91 Fund is to use funds that (1) it no longer has and (2) spent and paid out to third parties years ago," the plaintiffs' attorneys said. "Unless Defendants have found a way for money to be in two places at once, their plan for 'reimbursement' is not actually a plan for reimbursement at all."

A department spokesman, David Parker, said the agency and the commission "are in compliance with the court's order."

"We will respond to the plaintiffs' motion, which seems to include a misunderstanding of the defendants' process and misconstrues defendants' compliance with the order," he said.