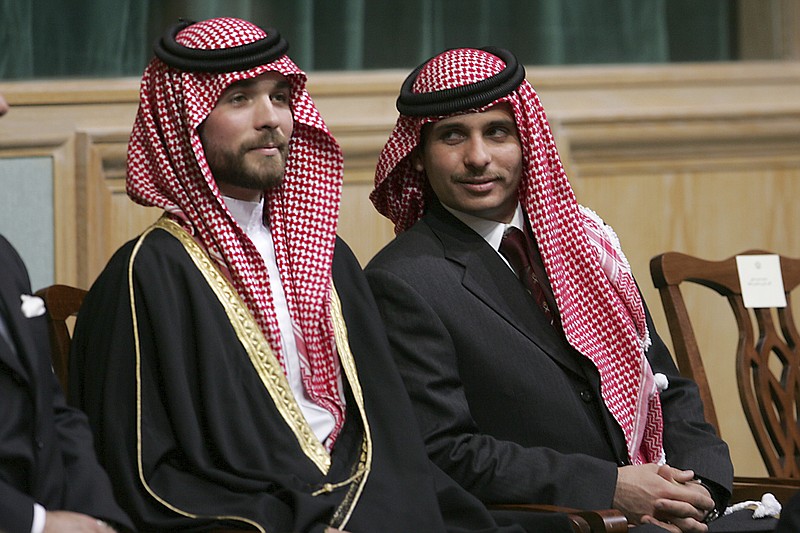 FILE - In this Nov. 28, 2006, file photo, Prince Hamzah Bin Al-Hussein, right, and Prince Hashem Bin Al-Hussein, left, half brothers of King Abdullah II of Jordan, attend the opening of the parliament in Amman, Jordan. A new audio recording that circulated online Tuesday, April 6, 2021, seems to capture an explosive meeting between Prince Hamzah and the army chief of staff that triggered a rare public rift at the highest levels of the royal family. (AP Photo/Mohammad abu Ghosh, File)

JERUSALEM -- Jordan imposed a sweeping gag order on coverage of its palace feud Tuesday after a recording indicated that authorities tried to silence a former crown prince over his meetings with critics, a sign officials are increasingly nervous about how the rare public rift in the royal family is being perceived.

The recording appears to capture Saturday's meeting between King Abdullah II's half brother, Prince Hamzah, and the military chief of staff that set off the current political crisis. In the wake of that meeting, officials accused Hamzah of being part of a foreign plot to destabilize the kingdom -- but no such conspiracy is mentioned on the recording.

Before the audio surfaced, the palace and a mediator close to Hamzah said the royal family was in the process of resolving the crisis. It's unclear where those efforts stand.

On the recording, Gen. Yousef Huneiti, the military chief of staff, says the prince is being placed under a form of house arrest because of meetings he had with individuals who "started talking more than they should."

The prince raises his voice, accusing the general of threatening him and saying he has no right to issue orders to a member of the royal family.

Huneiti denies threatening him and says he is simply delivering a message from the heads of intelligence and general security. But by then, Hamzah is shouting over him. "Get in your car, sir!" he says. Neither man mentions the king or a foreign plot.

The recording is consistent with the prince's earlier description of the encounter.

Jordan, which borders Israel, the occupied West Bank, Syria, Iraq and Saudi Arabia, has long been seen as a bastion of stability in a turbulent region. But the coronavirus pandemic has battered Jordan's economy, and Hamzah's unprecedented criticism of the ruling class -- without naming the king -- could lend support to growing complaints about poor governance and human rights abuses.

Reflecting concerns about any sign of instability there, several allies, including the United States, have expressed their strong backing for the king. Saudi Foreign Minister Prince Faisal bin Farhan arrived in Jordan on Tuesday in support of Abdullah, according to Saudi state television.

Jordanian analyst Amer Sabaileh, speaking before the publication ban was imposed, said the dispute "puts more pressure on the king" to reform the system. He noted that the feud had also divided Jordanians, with many on social media expressing support for Hamzah.

The king "needs to go for fast action that saves the image of the family and the monarchy and the unity of society," Sabaileh said.

Instead, Jordanian authorities have leveled accusations against Hamzah. On the day after the prince's meeting with the military chief of staff, Foreign Minister Ayman Safadi announced authorities had arrested more than a dozen people and foiled a foreign plot, without saying which country was involved.

Hamzah, in a video statement, denied being part of any such conspiracy and lashed out at authorities for what he said was years of corruption and incompetence. He said they were trying to silence him because of his criticism. There has been no word since on his status or that of those who were arrested.

Some analysts have raised doubts about the suggestion of a foreign plot.

"Among the countries whose names have been bandied about -- Saudi Arabia, the United Arab Emirates, Israel -- none have an interest in stoking instability in Jordan or could have believed that an amateurish plot built around a disaffected prince and a handful of acolytes might possibly have overthrown the well-entrenched Abdullah," Ghaith al-Omari and Robert Satloff of the Washington Institute, a U.S. think tank, wrote in a policy briefing.

Abdullah and Hamzah are both sons of King Hussein, who remains a beloved figure two decades after his death. Upon ascending to the throne in 1999, Abdullah named Hamzah as crown prince, only to revoke the title five years later and give it to his oldest son.

While Abdullah and Hamzah are said to have good relations generally, Hamzah has at times spoken out against government policies, and more recently had forged ties with powerful tribal leaders in a move seen as a threat to the king. 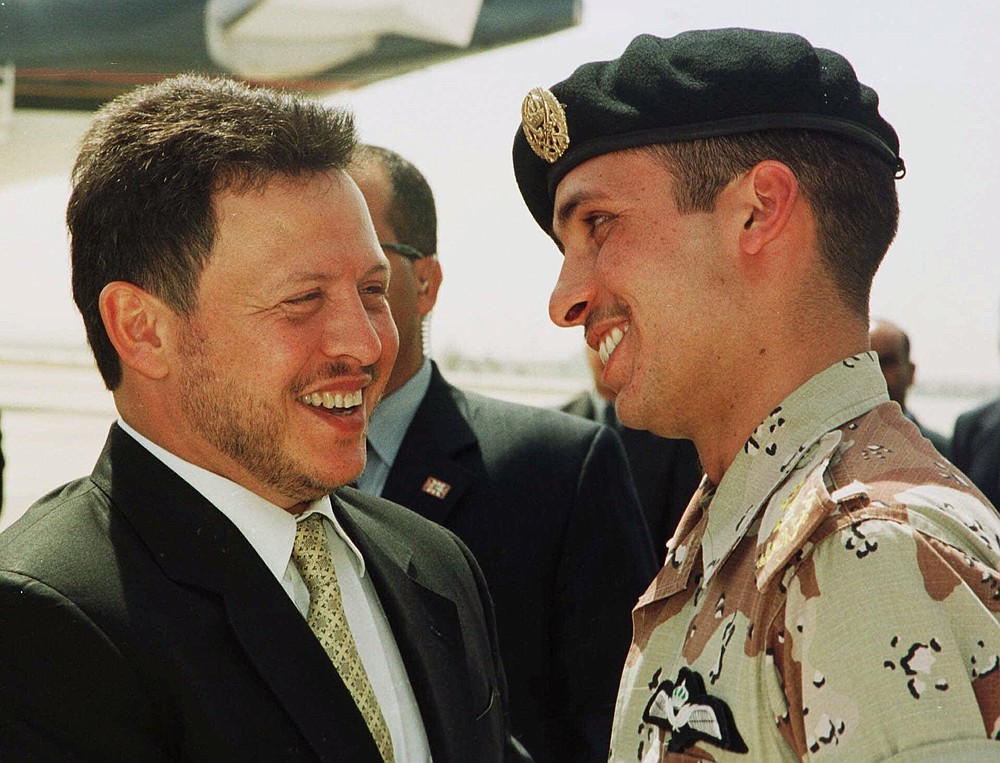 FILE - In this April 2, 2001, file photo, Jordan’s King Abdullah II laughs with his half brother Prince Hamzah, right, shortly before the monarch embarked on a tour of the United States. A new audio recording that circulated online Tuesday, April 6, 2021, seems to capture an explosive meeting between Prince Hamzah and the army chief of staff that triggered a rare public rift at the highest levels of the royal family. (AP Photo/Yousef Allan, File)
ADVERTISEMENT