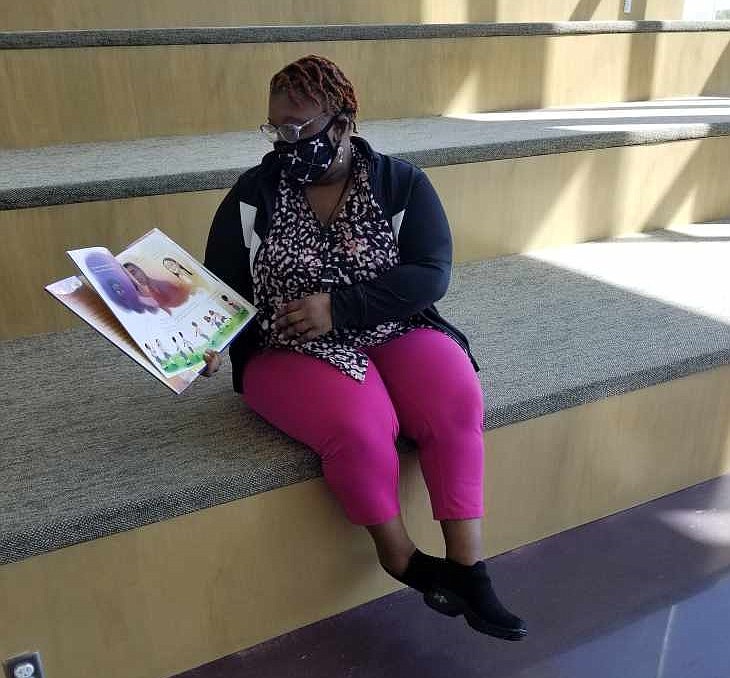 Michelle Washington, a programmer with the Pine Bluff/Jefferson County Library System, is ready to read. After about a year of closure due to remodeling and covid-19, the system's monthly programs are back. (Special to The Commercial)

It's National Library Week but despite this, the White Hall Library's April programming participation remains low.

The 41-year-old library, located at 300 Anderson Ave., is a branch of the Pine Bluff/Jefferson County Library System, and after nearly a year-long shutdown for a major $270,000 renovation and the covid 19-forced closure, patrons are slow to return.

Ricky Williams, recently named the library system's interim director, said locals may be "a little nervous" about the virus, but they may also be unaware that their libraries have reopened.

Melissa Pickett, the library system's program specialist, said their special programs are in place and ready for participants. The library opened for book checkout and computer usage in late November but didn't restart extra programming until March.

"We're reintroducing some of our old programs," Pickett said last month, adding that it's possible they'll have more programs later. "We have programs for about every age group, but people are slow to come back."

Few, if any, are showing up for White Hall Library's programs including weekly Toddler Time and the PreSchool Corner. These are usually popular with young moms and child care centers.

Judy Normand, system programmer, said, the preschool centers aren't even offering to allow library staff in to do book readings or other activities.

Also, the after-school tween and teen and adult classes are mostly empty.

The library has followed guidelines of the Centers for Disease Control and Prevention.

"No one showed up" for the March quilting class, Normand said.

Staff members require patrons to wear masks when entering the building, but both Pickett and Normand said they believe patrons are reluctant to attend their programs because of the continuing threat of covid-19.

As the weather warms and the coronavirus vaccines are more available, Williams said, "Our numbers are gradually picking up."

Both Pickett and Normand said they are ready to welcome patrons back to the library.

This isn't just a White Hall phenomena; it's also happening at the system's new main library on Main Street, as well as at its other three branches in the Watson Chapel community, Redfield and Altheimer. These locations also underwent major renovations and were closed for an extended period of time because of the pandemic.

All the programs at the main library and branches are open to the public. For more information on program information or scheduling, interested people may visit https://pineblufflibrary.libcal.com.