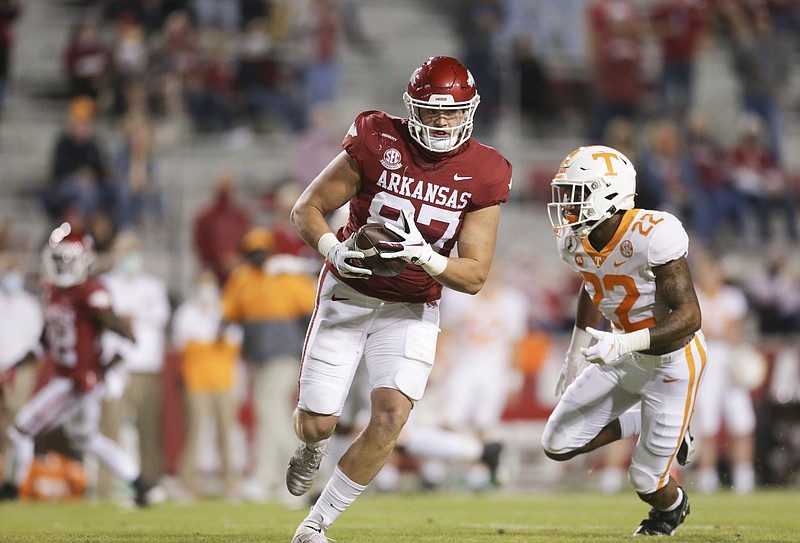 FAYETTEVILLE -- If there's one position the University of Arkansas could do one of those pipeline-to-the pros touts, it would be tight end.

A case could be made the Razorbacks have become a Tight End U since the end of the Houston Nutt era. A nearly unbroken line exists from D.J. Williams to Chris Gragg to A.J. Derby to Hunter Henry to Jeremy Sprinkle and up to Cheyenne O'Grady, who flashed pro potential a couple of years ago but hasn't wound up there.

Williams and Henry won the Mackey Award as the nation's best tight end in 2010 and 2015, respectively, within the first 16 years of the award's inception.

Can the chain of top-shelf tight ends live on?

There's a sixth-year senior in Blake Kern and a third-year sophomore in Hudson Henry who could make the case this fall that Arkansas is still in business for tight ends 11 years after Williams wrapped up a spectacular career in 2010.

In Henry's case, the legacy is deep and rich as the son of former Razorbacks center Mark Henry, and brother to Hunter Henry and current fifth-year senior linebacker Hayden Henry.

Kern, from Lamar, and Henry, a product of Little Rock's Pulaski Academy, are both in-state talents, so they're aware of the productive lineage of Arkansas tight ends.

They're also aware of the objective set forth by first-year tight ends coach Cody Kennedy.

"With Coach Kennedy coming in this season, I think one thing we needed to work on as a group was just physicality and just being real nasty on the field," Henry said after spring practice No. 10 on Tuesday. "That's something that every day we talk about in our room is finishing everything. Finishing blocks, finishing routes. Being the last guy to put a shove on a guy.

"We want to be those guys where everybody's like, 'Chill, all right?' That's something we've really put an emphasis on in our individual drills. We've been doing a lot of bags, a lot of just footwork. Working our hands. Just everything we can do for helping the run game, because we want to be a force for good."

Kern and Henry split starts in the 10 games of 2020 and each of them ranked among the Razorbacks' top five pass catchers.

Kern grabbed 20 passes for 201 yards and 2 touchdowns against the all-SEC schedule, while Henry had 16 receptions for 92 yards and 1 score, which came in the 21-14 upset of No. 16 Mississippi State on the road in Week 2.

Henry suffered a high ankle sprain on the third play of the 24-13 win over Tennessee in Week 6, and between that and a subsequent concussion he played dinged up the rest of the way.

"The game of football is tough, it's physical," Henry said. "Things happen, you get injured. That's why we're actually wearing padded helmets this year."

The tight ends say Kennedy's background as an offensive line coach in his previous stops has brought a new perspective into their room.

"Coach Kennedy has been a great impact to me and to our room," Kern said. "He gives us another way of looking at things. He gives us other ways of saying things and it's really, really helpful.

"He is a very vocal guy and he gets on us. He holds us to a standard that we need to be held at. He has been a great asset to our room, and with the coaching change, it is what it is, but at the same time Coach [Sam] Pittman hired a great football coach for us. We really appreciate that."

Henry said Kennedy came in and took control of the room and brought the group with him.

"He came from being an O-line coach, so that was a big transition for him," he said. "But it's really not. The tight end is really an extra lineman, but he's also a receiver. It's one of the most dangerous positions on the field.

"Coach Pittman brought him in to help our run game ... and help out Trelon Smith and all those guys running the ball and be able to break away runs and have big plays this season."

Henry said Hunter Henry, who recently signed a big free agent deal with the New England Patriots, has been a "huge" role model, and that he's quite aware of the tight end legacy at Arkansas.

"For sure," he said. "I think at the end of the day our goal is just to win games and to help the team as much as possible, and I think in doing that those kinds of things will come.

"But the kind of emphasis Coach Kennedy has really been putting on us is sacrifice. This isn't about us. We're out there to make the play for somebody else. We're running our route to get somebody else open. We're blocking to help somebody else make a play. We're about sacrifice. That's part of Coach Pittman's mission statement about being blue collar."

Kern, speaking a couple of weeks ago, discussed capitalizing on his bonus senior season, afforded by the NCAA's decision to give an extra year of eligibility due to the covid-19 crisis.

"So come back and work on my masters and play for the Hogs. Can't get better than that."

The bonus year also gave Henry another season to be teammates with his brother.

"He had his mind made up that he wasn't going to play, that he was just going to do his MBA and go to school and get a job. But I got a call one night, and he told me he was coming back. I was just so pumped, man."

The tight ends are getting extra work this spring, as senior Koilan Jackson -- who switched from receiver to his dad Keith's old position -- and redshirt freshman Collin Sutherland are both rehabbing injuries. Walk-ons Nathan Bax, Zach Lee and Nathan Johnson fill out the room until signee Erin Outley from Little Rock Parkview hits campus this summer.

Kennedy has a boyish face, but it's framed by a super-sized beard. Henry and Kern are sporting beards, helping give the tight ends room a tough-guy look.

"You know, mine was growing out a little bit," Henry said. "I actually went home last week. My dad made me shave it. He said it was getting a little too scraggly. But we've got a couple of beards going.

"We've got to get a couple of guys going in the room. Hopefully soon we can be the beard brothers."

New position coach Cody Kennedy is emphasizing an improvement in physicality by the tight ends in the running game. The depth of the position might be challenged, depending on the recovery of Jackson and Sutherland from injuries. Kern and Henry combined for 36 catches for 293 yards and 3 touchdowns last season in a 10-game slate. That’s OK numbers at the position. If the blocking productivity makes a marked improvement, and those pass-catching numbers go up a tad, that’d be mission accomplished in the tight ends room in 2021.