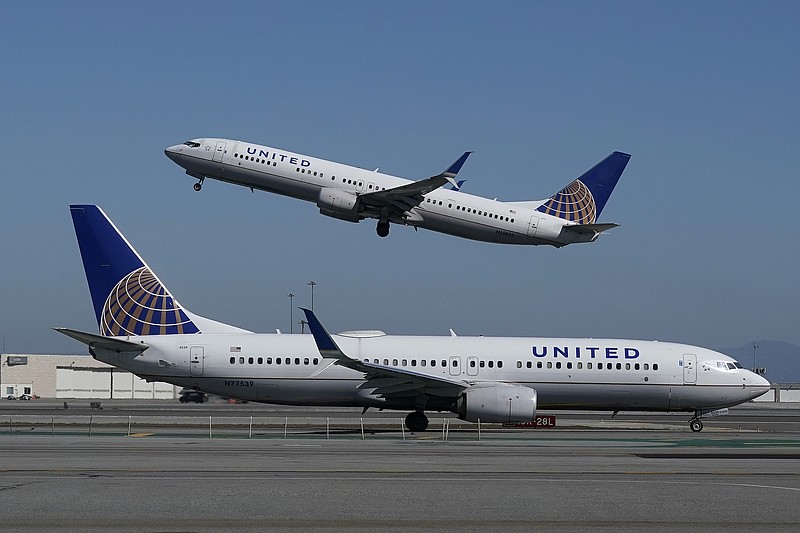 FILE - In this Oct. 15, 2020, file photo, a United Airlines airplane takes off over a plane on the runway at San Francisco International Airport in San Francisco. United Airlines says it will train 5,000 pilots at its own academy in this decade, and it hopes that half of them will be women or people of color. United said Tuesday, April 6, 2021, it is now taking applications for the academy in Arizona, including from people who have no flying experience. (AP Photo/Jeff Chiu, File)

United Airlines said it will train 5,000 pilots this decade, including taking on applicants with no flying experience, and it plans for half of them to be women or people of color.

United will borrow an approach used elsewhere, notably at Germany's Lufthansa, by taking people at the beginning of their flying careers and training them at its own academy, which it bought last year. United will also continue to draw pilots from traditional sources such as the military.

The subject of a pilot shortage -- it is not universally accepted that one exists -- was hotly debated in the airline industry before the pandemic hit, but the issue receded as airlines around the world grounded planes and reduced their pilot ranks in response to the plunge in air travel.

Now travel is rebounding, although it still hasn't returned to 2019 levels. United faces a small shortage of pilots in the near term. United said last week that it would hire 300 new pilots, underscoring the significant reversal for an industry that a year ago was slashing payrolls through buyouts, early retirement and temporary leave programs.

Some say the shortage at United and other major carriers will grow more severe in coming years, as large numbers of airline pilots approach the mandatory U.S. retirement age of 65.

United announced its plan in a publicity blitz that stressed the airline's hope that half of the academy graduates will be women or members of minority groups, which are vastly underrepresented in cockpits today. United said about 7% of its pilots are women and 13% are people of color.

Carole Hopson, a New Jersey-based United co-pilot who flies Boeing 737s, said she hopes the academy will give young Black women a less circuitous route than she took -- from newspaper reporter to working for the NFL and then Foot Locker before learning to fly in her 30s -- and give Black girls more role models in aviation.

"For people who have never seen a pilot who looks like me, that gives them an opportunity to say, 'Gee whiz, I can do that, too,'" Hopson said.

It is expensive to learn to fly and gain the 1,500 hours of flight time required for U.S. airline pilots -- a commonly cited sum is $100,000. To attract applicants, United said it will offer $1.2 million in scholarship aid this year and more in the future. But most applicants will likely need to borrow against the promise that -- if successful -- in several years they will earn pilot wages at United.

United said academy students will get basic licenses within two months and more advanced licenses within a year. They would gain experience flying for one of United's regional airline partners and could become United co-pilots or first officers in five years.

Other U.S. airlines are also bringing back more pilots as they prepare for an expected travel rebound.

Delta Air Lines Inc. said Monday that it recalled all of its 1,713 idled pilots on Thursday, before staffing shortages contributed to about 100 flight cancellations Sunday. About 400 will be trained in time to start flying again this summer, the company said. Southwest Airlines Co. said 209 pilots will return from voluntary leave on June 1.

The pilot recalls show how U.S. airlines are stepping up efforts to prepare for a potentially busy summer as more people receive covid-19 vaccinations.

More than 1.5 million passengers passed through domestic security checkpoints Sunday, compared with 122,029 a year earlier. United and American Airlines Group Inc. have said their planes are about 80% full.

Delta's reliability will improve this spring and summer "as more of our workforce becomes vaccinated and more pilots return to active flying," the company said in an emailed statement.

Information for this article was contributed by David Koenig of The Associated Press and by Mary Schlangenstein of Bloomberg News (WPNS).